The GOP's investment paid off. But even in this loss, Iowa Democrats have many reasons to feel hopeful, not only because of DeJong's massive over performance compared to other Democrats, but also because the fundamentals of the district suggest something much larger going on.

Simply put, Democrats never should have had a chance here. In terms of voter registration, Republicans are up 14 percent over Democrats, who come in third behind no-party voters. In 2016, Donald Trump outpolled Hillary Clinton 62 percent to 33 percent, and the Republican statehouse candidate (who just narrowly won a promotion to the State Senate, triggering this special election) won by a similar margin, 65 percent to 35 percent.

In fact, the last Democrat I can find who won this seat in a general contested election was Tom Harkin, during his final re-election bid in 2008. Despite winning the state in a rout--63 percent to 37 percent and carrying all but five counties--Harkin received just 54 percent of the vote in the precincts that now make up House district 6. That is in line with a partisan lean of R+9. You can find the precinct level data for each of these races on this Google spreadsheet.

DeJong's 44.31 percent of the vote on January 16 wasn't enough to claim a tangible victory, but it was enough to make her the best performing Iowa Democrat in House district 6 in a decade. She outperformed Clinton by 10 percent and essentially matched President Barack Obama's 2012 showing in the district. From a 32 percent Trump victory just over one year ago, DeJong lost only by 11 percent, a 19 percent narrowing of the margin in favor of the Democrat. DeJong did this while being outspent nearly 10 to 1, as a first-time candidate, and without the institutional support that the Republican candidate received. DeJong kept it close in a place where it shouldn't have been.

Digging into the precincts, the story of the election becomes clear. Todd Wendt was able to win the precincts comprising House district 6 last month, but he did so in a race where turnout topped just 16 percent. This time, turnout was higher, around 20 percent, in a more favorable environment for the Republican. Wendt's near-shocker was more due to depressed Republican turnout, rather than large-scale loyalty shifting among voters in Northwest Iowa. Republicans were able to coax 691 more voters to the polls for Bossman than Carlin, while DeJong added just 120 voters to Wendt's district total. In a district where the GOP has a distinct advantage, higher turnout meant a more conservative electorate.

Negative values indicate DeJong did worse than the compared candidate, positive values demonstrate that she did better. With the exception of President Obama and Todd Wendt, DeJong did significantly better across the board. 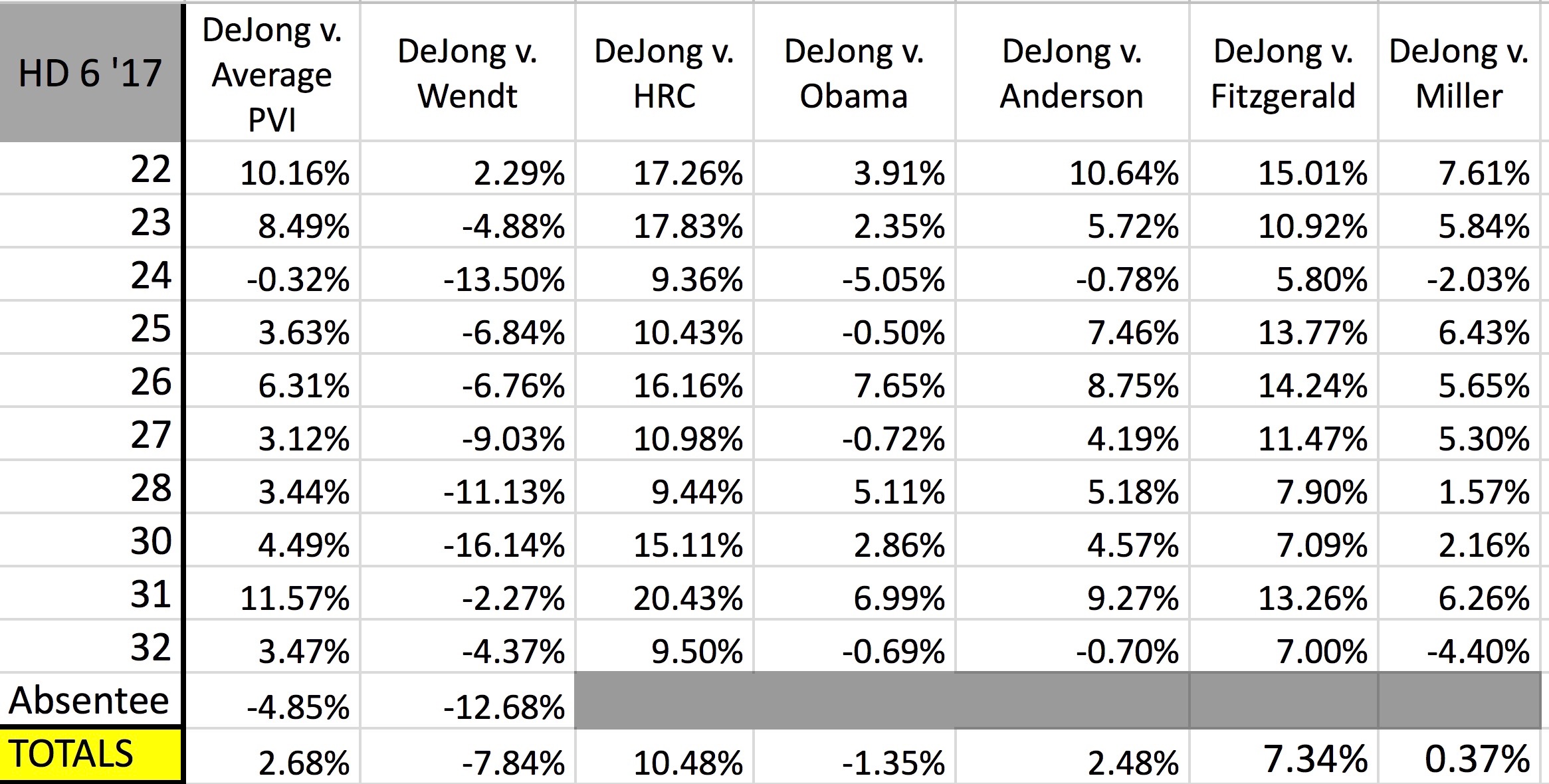 Most of DeJong's support came from the traditionally Democratic precincts closest to the heart of Sioux City. Here she actually was able to outrun President Obama's margin, with more than 58 percent and 60 percent of the vote in Precincts 22 and 23. These precincts are some of the working class neighborhoods that have been hospitable to Iowa Democrats in the past, but swung hard against Clinton in 2016. In these areas, Clinton barely scraped above 40 percent of the vote.

It's worth remembering that even though DeJong's loss might seem demoralizing, Hillary Clinton failed to win a single precinct in House district 6, while DeJong won three and came close in several others.

The table below shows the performance of each candidate by precinct. I was hoping to have a better looking map for this election, but I just can't figure out QGIS. 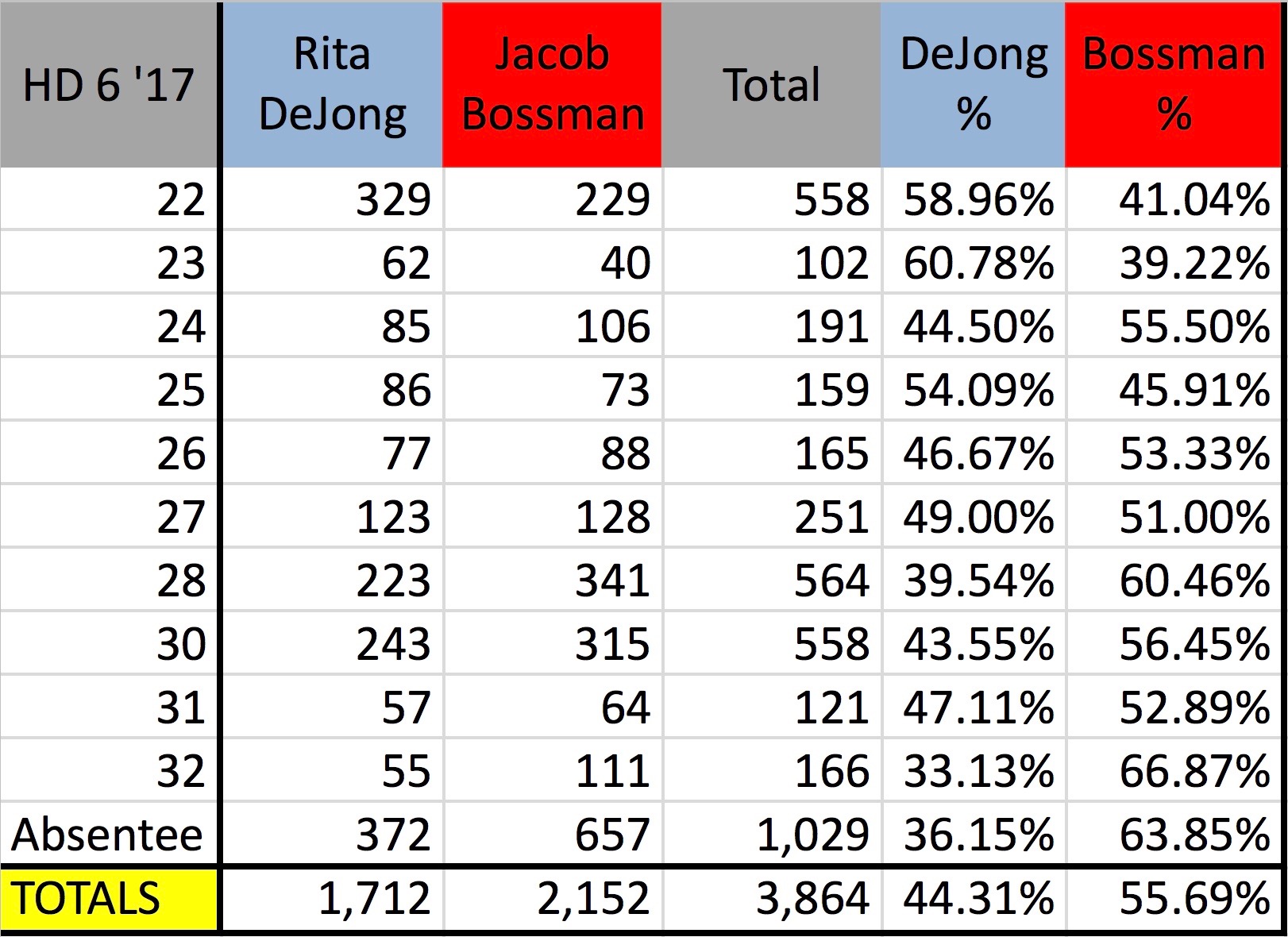 Outspent, but not outworked

The defining aspect of this special election was the money spent. Because the Todd Wendt special election received little outside attention and minimal support from the state parties, it proved to be a good measure of voter enthusiasm and a "pure" political environment, where candidates must compete only with their own resources. While that can be nice to imagine, of course, that won't be the environment that Iowa Democrats face in November of this year, as Republicans are certain to spend massive amounts of money to preserve their legislative majorities and their statewide offices.

However, the predictive value of this election allows us to measure two factors against one another: money vs. grassroots enthusiasm.

It's unclear how much door to door campaigning Republican Bossman did for this special. On the other hand, Woodbury County Democrats ran a massive volunteer operation to get out the vote for DeJong (I helped out the Saturday before the election). Additionally, several state leaders, including gubernatorial candidate, Iowa Democratic Party chair Troy Price, and House Democrats leader Mark Smith all helped out with GOTV volunteering. While Bossman had the cash and several institutional factors in his favor, DeJong benefited more from an engaged volunteer and voter base.

Obviously, the outpouring of activism wasn't able to overcome a huge voter registration advantage and the money spent. But it's very notable how much the Republican Party had to spend to get Bossman over the finish line. In Iowa elections, the state parties will often purchase campaign advertising or do mailings as an "in-kind" contribution to a candidate, so it's not listed as general contribution. The Republican Party gave "in-kind" more than $113,000 to Jacob Bossman to be spent on TV advertising, and a massive absentee ballot mailer, as well as several other mailings with both positive messages about Bossman and negative ones about DeJong.

In the 2016 elections, few House races received as much outside spending as Bossman. For the 2016 House district 6 election, neither party made any "in-kind" contributions. The fact that the Iowa GOP needed to drop six figures on a seat where they've never had to spend money before, and where Trump won more than 60 percent of the vote, is not only incredibly telling for 2018 prospects, it should worry GOP leaders in Iowa. Republicans routinely outspend Democrats in state legislative elections, but the disparity in competitive races is seldom 10-1.

Democrats in Woodbury County showed that a hard-working candidate with a strong GOTV campaign operation can fight a big money advantage nearly to a draw. You can bet that the top-tier races this fall will not be as underfunded.

Shouldn't have even been close

The relative partisanship of this district suggests that the race shouldn't have even been close. If you sort the 100 districts in the Iowa House in terms Donald Trump's margin of victory, House district 6 is the 24th most Republican in the state. In other words, 75 seats are more hospitable to Democrats than the place where Rita DeJong was just outspent 10-1 and still over performed. The 2006 and 2010 election cycles in Iowa demonstrate that even well-known incumbents can fall victim to a wave election. Competitive open seats are even more susceptible to a transfer of hands in a wave election.

As filing begins for state legislative contests in late February, Republicans who decide to retire rather than face a competitive election may be critical in Democrats' efforts to retake the state legislature.