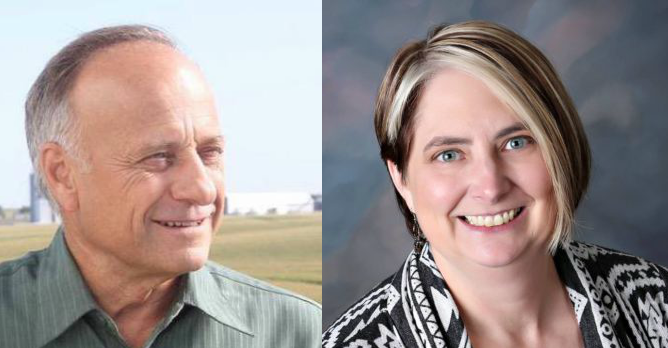 First, Hanson noted, "Prior to anyone signing a Nomination Petition, the header of the Petition page is to be completed in its entirety." Yet several of King's petitions have signatures on pages where the name of the county was hand-written.

The Iowa Secretary of State's office guide for primary candidates advises, "Before anyone signs the petition, complete the required information in the header of every petition page." (page 6) The "Signers’ County of Residence" is among the points that "must appear on each petition header." (page 7)

The full objection letter, which includes several examples of disputed pages, is at the end of this post. Here's one page containing signatures from people living in different counties. Someone crossed off names of Charter Oak (Crawford County) residents, leaving names from Ute, a town in Monona County, which is hand-written near the top.

A number of Mr. King's petitions do not contain original signatures. Submission of a copy, fax or scanned document makes it impossible to determine if the signatures were in-fact, collected on the document being submitted (with a fully complete header) or were 'cut and pasted' to appear as though they are one document. Therefore, nominating petitions containing scanned, copied, faxed or other non-original signatures should be disallowed.

Here's the page from the objection letter that purports to contain non-original signatures.

If the panel disqualifies all pages that either have a hand-written county name near the top or lack original signatures, King will have failed to meet minimum signature requirements for enough of IA-04's 39 counties.

Hanson's challenge is one of eight on the March 27 agenda for the State Objection Panel, consisting of Attorney General Tom Miller, Secretary of State Paul Pate, and State Auditor Mary Mosiman. I doubt they will knock King off the ballot over those infractions. Miller, then Secretary of State Matt Schultz, and Deputy State Auditor Warren Judkins allowed Joe Seng to remain on the 2012 Democratic primary ballot in Iowa's second Congressional district, despite missing information from the headers on some pages of Seng's petitions. At that time, Miller cited precedent of election panels being "deferential to someone having access to the ballot.”

However, there is no excuse for an experienced politician like King to turn in such sloppy petitions. King "employs his son and daughter-in-law as full-time campaign staffers," reported for the Des Moines Register last year. They ought to have made sure all petitions were in order.

Hanson would be the only Republican on the June 5 primary ballot in IA-04 if King were removed from the ballot. Even then, I wouldn't count King out. Gven his name ID and popularity in conservative circles, he might be able to wage a successful write-in campaign. It's not hard to spell "King."

UPDATE: The election panel unanimously rejected Hanson's challenge, after King's representatives showed that nominating petitions for Pate, Miller, and Mosiman also had hand-written county names. Miller (a Democrat) joked that it was the "first time I've voted for Steve King."