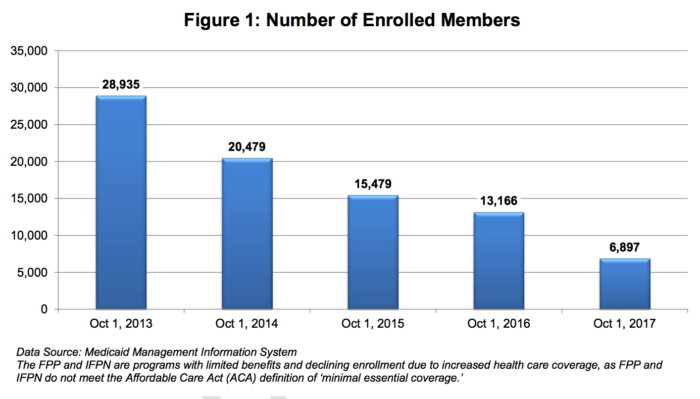 Republican lawmakers made big promises last year that Iowans would have "more access" to family planning services under a new state program that excluded Planned Parenthood.

As anyone could have foreseen, the opposite was true. In the first nine months of the State Family Planning Program's existence, the number of Iowans enrolled dropped by a third. The number who obtained at least one reproductive health care service fell by more than 40 percent from the first quarter to the second quarter the program was operating. The number of health care providers billing the program also declined by 40 percent during the same time frame.

The Iowa Family Planning Network, which operated from 2006 through June 2017 through a Medicaid waiver, served some 30,000 Iowans per month at its peak. That number fell sharply after the Affordable Care Act took effect in 2013. As low-income Iowans obtained comprehensive coverage through the Medicaid expansion, they didn't need to enroll in a limited program for reproductive health care.

Still, 8,207 Iowans were enrolled in the State Family Planning Program when it launched in July 2017, according to records the Iowa Department of Human Services provided to Barbara Rodriguez of the Associated Press. Enrollment in March 2018 totaled just 5,334.

Rodriguez asked for quarterly data showing how many services enrollees obtained. (Those services include birth control counseling and supplies, pregnancy and sexually transmitted disease testing, emergency contraception, pelvic exams, Pap smears, and treatment for yeast infections.) The Iowa DHS figures indicate "2,664 members accessed services or had a prescription filled" from July through September 2017, while only 1,523 people did so from October through December.

The DHS also told Rodriguez that 957 different health care providers provided at least one service through the Family Planning Program during the first quarter of the current fiscal year, but only 559 providers did during the second quarter.

Sensibly, Rodriguez asked for the program's "unique provider count" each quarter, rather than for the department's master list of affiliated providers. That list has been full of "errors" and "redundancies," Erin Jordan showed in this investigative report for the Cedar Rapids Gazette in January. Many laboratories that don't see patients were mentioned, along with some out-of-state facilities and medical specialists who don't offer reproductive health care.

Rodriguez reported on her findings for the AP on May 3.

“It’s just showing that the program’s not really working. It’s not getting to people who need it,” said Jodi Tomlonovic, executive director of the Family Planning Council, which receives and distributes separate federal funds to organizations that provide family planning services. [...]

Separate agency documents obtained by the AP show that the state has paid just $285,000 in claims to health providers from July through March, which covers most of the budget year. The human services department set aside roughly $3 million for the program.

Matt Highland, an agency spokesman, declined to discuss specifics of the latest findings, but he argued that the newly released data don’t show a complete picture and pointed out that health providers can still file claims for services provided months ago. [...]

Erin Davison-Rippey, a representative for Planned Parenthood of the Heartland, said the reduction in claims is troubling and questioned why health providers would wait to file claims to get paid. Planned Parenthood, which was the largest recipient of funding under the old family planning program, has closed four of its 12 clinics in Iowa since the new program launched. [...]

Tomlonovic said the most recent numbers cannot be solely attributed to the longer-term decline caused by the Affordable Care Act. She said the latest figures followed the earlier release of Department of Human Services data to the AP that showed a nearly 50 percent drop in enrollment compared to the same period in the previous year, when the old system was still in place.

Here are the records DHS provided to Rodriguez in January, and here are the numbers the department sent last week.

Why did it fall to journalists to sniff out details on enrollment trends or the accuracy of health care provider lists?

The state legislature often requires agencies to report on the implementation of new initiatives. However, the 2017 bill that defunded Planned Parenthood did not instruct DHS to keep lawmakers or the public informed on its new family planning program. State Representative Dave Heaton, who chairs the relevant appropriations subcommittee, told Rodriguez last week "he may add language to a budget bill requiring public reporting" on the program. But no such provision made it into the health and human services budget for fiscal year 2019, approved by party-line votes in each chamber on May 4 and 5.

Anyone who paid attention to what happened after Republicans defunded Planned Parenthood in other states could have predicted Iowans would experience a rapid decline in access to reproductive health care. What are the odds we will escape disastrous secondary effects such as a twofold increase in maternal mortality in Texas or a massive HIV outbreak in Indiana?

Incidentally, don't bet the farm that this snapshot from the DHS conveys the full scale of what's happening with the family planning program. The department's April 30 letter to Rodriguez contained this extraordinary passage.

The data provided by the Iowa Department of Human Services (DHS) in response to your request is provided “as is.” DHS cannot ensure the accuracy, completeness, or reliability of the data. The encounter validation process is not yet complete and a one percent (1%) error rate has not yet been achieved. Users accept the quality of the data they receive and acknowledge that there may be errors, omissions, or inaccuracies in the data provided. Further, DHS is not responsible for the user’s interpretation, misinterpretation, use or misuse of the data. DHS does not warrant that the data meets the user’s needs or expectations.

In all the times I've received records from state or local government agencies, I've never seen anything like that disclaimer.

Iowa lawmakers should demand thorough and accurate reporting on a program that is supposed to provide basic health care to thousands of low-income people.

During the 2017 legislative session, Republican lawmakers ignored warnings that the bill they wrote to exclude abortion providers would apply not only to Planned Parenthood, but also to scores of UnityPoint or University of Iowa Health Care clinics. UnityPoint leaders were unable to persuade Iowa DHS officials to allow participation by facilities where no abortions are performed, such as a dedicated reproductive health care clinic in Muscatine.

To address that problem, Republicans added language to next year's human services budget that would force DHS to restore eligibility to "an Iowa nonprofit corporation that controls, directly or indirectly, a regional health care network consisting of hospital facilities and various ambulatory and clinic locations [...]." (Division XII of Senate File 2418)

The rule-making process can take months, but later this year, DHS statistics should reveal how much that gesture to UnityPoint affected access to family planning services through the state program.

ANOTHER BLOW TO PLANNED PARENTHOOD AVERTED

As horrendous as Iowa Republican governance has been for reproductive rights--most recently demonstrated by the blatantly unconstitutional abortion ban--the 2018 legislative session could have turned out even worse for Planned Parenthood.

The first version of the human services budget for fiscal year 2019 would have blocked the non-profit from receiving federal funds earmarked for sex education (see Division XXII of Senate file 2418). Brianne Pfannenstiel and William Petroski reported for the Des Moines Register on May 3,

“While the conversation and the education is incredibly important, I think there were some members who are concerned about who does that education," said Rep. Joel Fry, R-Osceola, chairman of the House Human Resources Committee.

Senate Health and Human Services Appropriations Subcommittee chair Mark Costello offered the same flawed logic we heard from many Republicans during last year's family planning debate: "We are not getting rid of sex education. We are asking others to provide it and probably better than Planned Parenthood."

Fortunately, key House Republicans recognized the obvious: barring Planned Parenthood from sex ed programs would inevitably increase unintended pregnancies and sexually-transmitted infections. Heaton offered an amendment that removed the proposed restrictions on federal funding. House members approved it by 88 votes to 2 before passing the human services budget along party lines. Only Representatives Sandy Salmon and Skyler Wheeler voted against Heaton's amendment; other House Republicans who dislike Planned Parenthood may have sujpported it because of its language on annual doctor's visits for Iowa children in foster care.

Only two Republican senators, Jim Carlin and Jake Chapman, voted against concurring with the House amendment to the health and human services budget. Chapman then joined all the Senate Democrats to oppose final passage of the appropriations bill. Carlin voted yes, possibly because the GOP caucus needed him to reach 26 votes (two members were absent).

Top image: Figure from records the Iowa Department of Human Services provided to the AP's Barbara Rodriguez in January 2018.