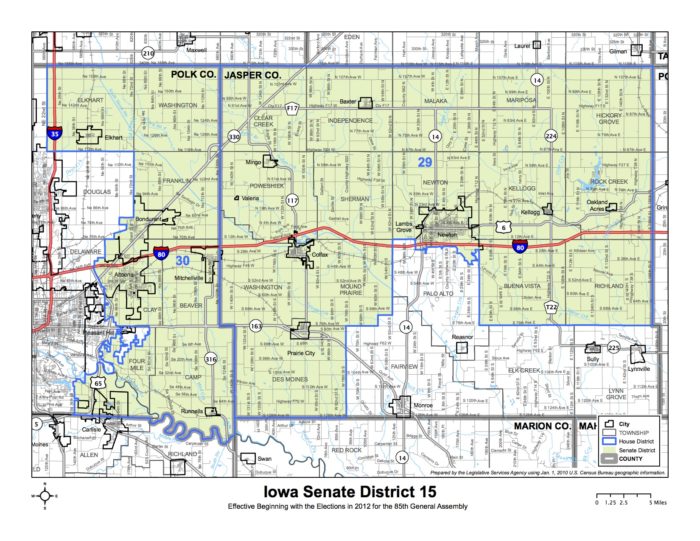 The hill for Democrats to climb in the Iowa Senate just got steeper. State Senator Chaz Allen announced today that he will not seek a second term because of an unspecified "new business opportunity."

Democrats hold only 20 of the 50 seats in the upper chamber and were already looking at a difficult Senate map before independent Senator David Johnson decided to retire (giving Republicans a guaranteed pickup in Senate district 1) and Fred Hubbell selected Senator Rita Hart as his running mate (making Senate district 49 an open seat). Democrats recruited Patti Robinson to run in Hart's district. Now they need to find a replacement for Allen before the general election filing period closes on August 25.

Senate district 15 covers most of Jasper County, including the city of Newton and parts of eastern Polk County. On paper, the district leans slightly Democratic, with 14,495 active registered Democrats, 13,739 Republicans, and 14,835 no-party voters at the beginning of July. But the recent voting history is not encouraging. Although Barack Obama outpolled Mitt Romney here by 51.7 percent to 46.8 percent in 2012, Donald Trump took 54.1 percent of the vote in Senate district 15, to 39.5 percent for Hillary Clinton.

Even as Allen was elected to an open seat in 2014, voters in his district favored Republican Joni Ernst over Bruce Braley in the U.S. Senate race by 52.4 percent to 42.7 percent.

I was surprised to see yesterday that Allen reported raising just $4,275.00 since May 29. All but $225 of those contributions came from PACs, most of which gave similar amounts to many state lawmakers. Allen's last filing before the June primary showed three donations totaling $1,150. From January 1 through mid-May, he raised only $3,850.00, of which $2,250 came from PACs. In other words, Allen made little apparent effort to raise money during the past six months.

Republicans aren't fielding a top-tier challenger here. Tim Shay had not raised or spent a single dollar through July 14. But don't be fooled: the GOP will have plenty to spend to boost either Shay or some other contender who may step up now that the seat is open. (A nominee may withdraw so that the party can select another candidate at a special district convention.) Former Senate Majority Leader Bill Dix transferred $522,000 to the Republican Party of Iowa shortly after resigning in March. Current Senate Majority Leader Jack Whitver had $435,262.48 cash on hand as of July 14, most of which he will likely allocate to other districts.

I am announcing today that because of a new business opportunity, I will not be seeking re-election to the Iowa Senate this November.

The end of this year will mark 14 years of elected service for me. That’s something I would have never thought possible 14½ years ago. Fourteen years ago, Teri and I had daughters who were five years old and three years old. Today, they are 19 and 17 years old. Time flies when you are busy and having fun!

As Mayor of Newton, we came through the loss of Maytag with new industry and new spirit. Today, I am proud that the people of Newton are still fighting to make our community stronger and better.

As your State Senator, we fought for more accessible health care for more Iowans, and we passed a Drug Endangered Child law that helps kids get out of dangerous situations and helps addicted parents get the help they need. We fought for better wages and better jobs, the right for women to make their own health care decisions, and we fought against efforts to take away the rights of working Iowans. While we didn’t win all those battles, they were fights worth fighting, and that fight must continue.

As Teri, our daughters and I start a new chapter in our lives, we want to thank everyone for the opportunity to serve the people of Iowa.

“There’s so much we will miss about Senator Chaz Allen: his work ethic, his sense of humor, and his dedication to serve the people of Jasper County and eastern Polk County.

"In the Senate, Chaz brought common sense to our debate about how to create better jobs, better schools and a better quality of life for all Iowans.

"We wish Senator Chaz Allen and his family all the best in the next chapter of their lives.”

UPDATE: Nunn has not replied to my inquiry, but Shay withdrew from the Senate race on July 26. Clearly Republicans have a stronger candidate in mind--if not Nunn, then someone else more committed to raising money and actively campaigning.