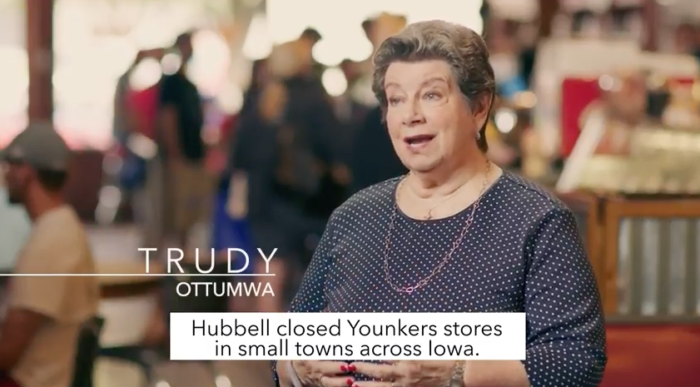 Governor Kim Reynolds launched her first negative television commercial on July 20, with a spot focusing on decisions Fred Hubbell made as chief executive of Younkers during the 1980s. The move came a few days after another national election forecaster declared the Iowa governor's race a "toss up," as Cook Political Report did last month.

Incumbents who are confident about their standing with voters don't typically go negative on tv this far out from an election. New campaign disclosures filed on July 19 show that while Reynolds had more cash on hand than her opponent--even after spending $1.2 million on advertising since the end of May--Hubbell more than doubled her fundraising during the same period and will likely be competitive financially through the November election.

Reynolds has spent nearly $2 million on television commercials to date. Her campaign's first three spots focused on the governor's personal biography, highlighting jobs she held as a young woman and how she pursued a college degree over many years.

The newest ad, targeting Hubbell's leadership of a department store chain, amplifies the message of billboards the Republican Party of Iowa launched in several cities this week. Here's "Younkers":

In the ad, a woman identified as Diane from Newton states, "Younkers was the heart of our town." (Really? Not Maytag?) Kevin from Spencer says Hubbell "shut it down and fired everyone." Trudy from Ottumwa adds, "Small towns were a drain on Hubbell's profits. That's what they told us." Tara from Spencer (who, like Kevin, doesn't look old enough to remember happenings during the 1980s) says, "So he closed stores in Spencer, Ottumwa, and Newton." Kevin goes on: "Hubbell couldn't make enough money from us, so...we got left behind."

"The worst thing," Tara says, was Hubbell getting a $90,000 raise "after everyone was fired." "90 thousand dollars," Diane repeats for emphasis. Trudy closes out the spot: "The only paycheck Fred Hubbell cared about was his own."

I assume the Reynolds campaign concluded the Younkers attacks would have legs based on polling or focus group data. As someone outside the target audience, it can be hard to evaluate how well a campaign ad conveyed the message. This spot struck me as much less effective than it could have been. The best testimonials feature clips of people speaking in their own words. This ad has a forced feel, suggesting strategists wrote a script and found people to recite the lines on camera. The positive commercial Reynolds launched earlier this month, in which a social worker praised the governor's work, likewise didn't sound very natural. (Bleeding Heartland will focus on the candidates' messaging about mental health in a forthcoming post.)

Pat Rynard observed at Iowa Starting Line that the people on screen in the attack ad are local Republican Party activists or county GOP leaders. Kevin and Tara were children living in another county when the Younkers in Spencer closed. Reynolds' image-makers should have hunted for Iowans who had worked at those stores and could speak about how corporate decisions affected them.

Hubbell's campaign blasted what they called "cherry picking and grossly distorting facts" from three decades ago. A campaign news release noted that since the start of the Branstad/Reynolds administration, more than 2,100 state jobs have been eliminated as mental health institutes, the Iowa Juvenile Home, and dozens of workforce development centers were shuttered. I would add that public school districts have laid off many educators and support staff due to persistent Republican under-funding. Reynolds signed a bill containing the third-smallest state aid increase for K-12 schools in more than 40 years. My son's high school in Des Moines alone cut six positions for the coming year, because state funding hasn't kept up with rising costs.

During his Iowa Public Television interview last month, Hubbell said this about the Younkers store closures.

Well, you can look at the record, while I was at Younkers we did close a few small, very small stores. Most of them were actually what we call clearance stores in Council Bluffs and one in the Eastgate Shopping Center here. But the reality is we also bought the business and we added a lot of new stores to Younkers and we hired a lot more people. When we had the Farm Crisis in the 1980s, which is when I was the Chairman of Younkers, it was a tough time for this entire state. I can remember driving to stores and in those days we didn't have a lot of highways so we went on two-lane roads, and I can remember driving by farm foreclosure sales from one store to another and a lot of those people were our customers, a lot of those people were our employees. And so we had to take tough steps to make sure we kept our business open and we employed as many people as possible. We started Farm Aid concerts, we brought Willie Nelson concert series to Omaha to do several concerts, they're still doing them in the Midwest now. We gave out Farm Aid scholarships to help kids go to school. That was a tough time. But our commitment was always to make sure our business was stable and could grow and could employ as many Iowans as possible. So sometimes you have to make these kind of decisions.

Final point: I suspect this commercial could have been much more damaging if it were the first message most Iowans heard about Hubbell. But the Democratic nominee was running his own tv ads in Iowa's largest media markets for months before the June primary. Within the last ten days, the Hubbell campaign released two new spots, about putting people first and the impact of the looming trade war on Iowa's economy.

HIGHLIGHTS FROM THE CANDIDATES' FUNDRAISING AND SPENDING

Iowa candidates were required to file campaign finance disclosures this week covering the period from May 29 to July 14. (Bleeding Heartland previously covered highlights from the Reynolds and Hubbell mid-May and pre-primary financial reports).

The governor brought in $1,173,647.31 in cash contributions during the latest period, plus about $23,000 in-kind, mostly from people holding fundraisers. More than $1 million of the Reynolds donations came from individuals, itemized here. The biggest givers were longtime major donors to Iowa Republican candidates: Eldon Roth and Regina Roth of South Dakota each gave $50,000, Bruce Rastetter and Gary Kirke each gave $25,000, as did Gerald Lynch, and Don Lamberti gave $20,000 through his trust. Many others gave four- or five-figure gifts, including Former President George W. Bush and Laura Bush, who kicked in $5,000.

Advertising consumed about 80 percent of the $1,551,669.81 Reynolds spent between May 29 and July 14. Specifically, the campaign spent nearly $1.2 million on television ad buys and $25,500 on digital ads. Taking into account more than $715,000 the Reynolds campaign devoted to television before June Reynolds, the incumbent will soon exceed $2 million for television this year. Hubbell spent at least $3.5 million on tv ads before the primary.

The Reynolds campaign reported $3,629,686.13 cash on hand as of July 14, which should be enough to maintain statewide tv ad buys up to election day. Expect more attack ads: the latest disclosure shows a $7,500 expenditure for opposition research by the RGA Right Direction PAC and $4,501 for research services from MB Public Affairs.

Hubbell spent almost everything in his campaign account before the primary, but his latest disclosure blew the doors off with $2,601,424.47 in contributions since May 29 (click here for the itemized list). Hubbell and his wife Charlotte didn't make any major gifts this time, but the Democratic Governors Association gave $250,000. Labor unions collectively donated nearly 20 percent of the haul, including $350,000 from AFSCME and $100,000 from the Iowa State Education Association. Many of Hubbell's largest donors gave again, including $100,000 each from Art Coppola and Harry Bookey and $50,000 from friends including Bill Knapp.

Today, July 19, the Hubbell-Hart campaign announced raising an all time record-breaking $2,601,424 for the first fundraising deadline of the general election. With 99 percent of contributions from individual donors and overwhelmingly from Iowa, it underscores the widespread grassroots support for the Hubbell-Hart ticket all across the state. The announcement follows Fred Hubbell’s decisive victory in the Democratic primary.

With less than 4 months until the November 6 general election, the Hubbell-Hart campaign has raised an all time record-breaking $9,518,007 so far this cycle, demonstrating that the ticket is well positioned to take on Governor Kim Reynolds this fall. [...]

Any comments about the governor's race are welcome in this thread.