Before looking at the numbers, a reminder: a 5-point gap between first and fourth isn't statistically significant.  The Selzer poll is widely regarded for a good reason, but the first thing to know about Iowa is we really don't know who is ahead.

This chart shows numbers for the top five candidates in Iowa in all polls published since late October. 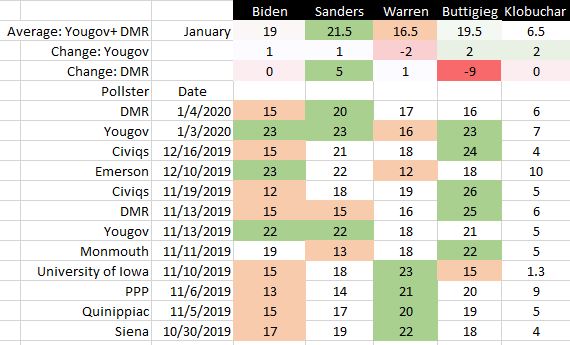 My brief take on the state of the race.

There are really two fights going on at once.  The first is an ideological fight between Elizabeth Warren and Bernie Sanders for the left and Joe Biden, Pete Buttigieg, and Amy Klobuchar for the right.

The second fight is among those who think Democrats need new leadership (and have therefore ruled out Biden and Sanders). This dispute is not really ideological and is primarily between Warren, Buttigieg, and Klobuchar. People may be surprised to hear this, but I hear from staff working for Warren and Buttigieg that a fair number of voters are trying to decide among those three candidates. Other less likely but possible contenders for this group are Andrew Yang and Cory Booker.

The polling suggests that this second fight is the most unsettled and the most volatile.  History tells us this later fight will not break evenly.  One of Warren, Buttigieg, or Klobuchar will likely win that vote decisively, and if that happens, that person will probably win Iowa.

I think it unlikely that Biden will exceed his highest percentage, 23 percent.  Sanders is probably ahead at this point, and his excellent organization means he could exceed his poll numbers in both Iowa and New Hampshire.  But he may have difficulty getting much above 25 percent.

Iowa will turn on whether the fight over voters who want new leadership is won decisively or remains split.

This chart provides a summary of the race this far.  One sees saw a lot volatility from April to November, and little over the last 30 days.  One sees the following: 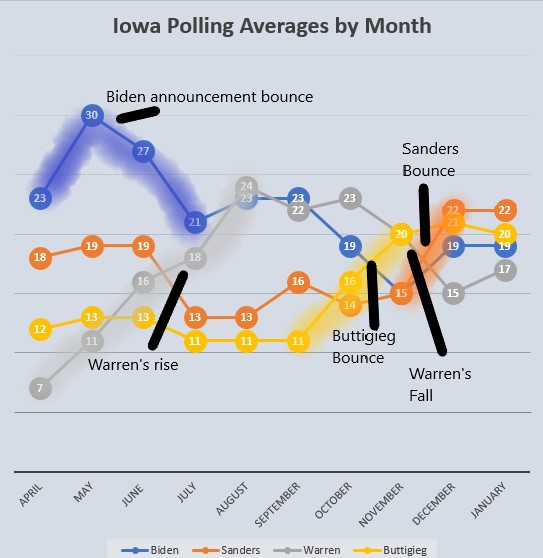 Let's look at what the latest Selzer and CBS/YouGov numbers suggest about some of the top candidates.

In March of last year, I noted how weak his Iowa numbers were for a front runner, and in June I wrote he would probably lose Iowa. In some ways a four-way split is good news for him.  Front-runners rarely improve their numbers in the last 45 days, Iowa so his only real hope to win is having the other candidates split the vote.

Biden's position both in Iowa and nationally is far weaker than generally understood. He is under 20 percent in New Hampshire polling as well.

When a front-runner loses Iowa, there is typically a 13-point swing from the front-runner to the Iowa winner in New Hampshire.

At this start of this piece, I said that Iowa had never been as important as it is this year.  The table below shows the probable result of two Iowa results, one based on the current DMR poll and the other based on a narrow Biden win.  I explained the numbers behind this model here.

If Biden loses New Hampshire, he will likely finish fourth. In fact, I wonder if he will seriously contest New Hampshire if he does lose Iowa. (Advertising in New Hampshire is expensive, and he is better positioned in Nevada.) 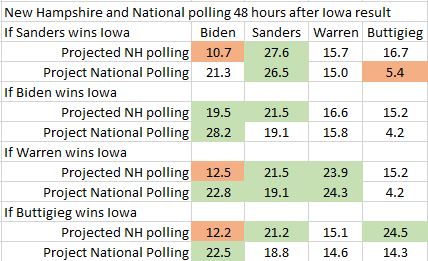 When the Des Moines Register released the last Selzer poll in November, I noted how historic Buttigieg's rise was.  In that post, I observed that only with candidates had ever risen as quickly as he had (Mike Huckabee, Herman Cain, Ben Carson, Donald Trump, Newt Gingrich, and Rick Santorum, Paul Simon and Howard Dean).  But while three of those eight went on to win Iowa, neither Democrat did.

The parallel that most interests me is the one to Howard Dean. Like Buttigieg, Dean was new to national politics in 2003. While Dean took the lead, the data suggested that few had made up their minds.  I explained last week why this cycle and 2004 are similar: few voters say they have made up their minds.

The latest Selzer poll found that only 40 percent say that they have made up their mind, a bit more than the 31 percent YouGov found.

Buttigieg's trajectory is reminiscent to Dean's, but it is also worth noting the similarity with Paul Simon before the 1988 caucuses. It must be noted that Simon won 26 percent of the delegates that year, and the 1988 polling (shown below) showed a race every bit as volatile as 2004 and this one.

Frankly, I am skeptical that someone as inexperienced as Buttigieg will actually do as well as his current numbers suggest.

Steve Kornacki posted the Des Moines Register's 1988 survey (then known as the Iowa Poll) on Twitter. That cycle was the only time I can find that there were ever five Democratic candidates above 10 percent in Iowa. There have never been four candidates over 15 percent, as there is this year.

As was the case in 2004, the 1988 Iowa caucus campaign had a wild finish.  One thing to note: the top three candidates effectively squeezed out the rest of the field.  That is not unusual: the media can only cover so many candidates.  If you are not close to the lead, the attention in a candidate receives in the last ten days recedes.  I do not think Buttigieg is like Hart, but I also do not believe he will hold his vote.

I suspect the other campaigns thought in October that if Warren was not stopped, she was going to win. The November debate clearly hurt her, as did increasing attacks on single-payer health care. Her loss of momentum was not limited to Iowa, and her campaign had to be worried. But at this point, her numbers have stabilized.

The good news for Warren is her favorables are still as good as anyone's in Iowa, and she and Buttieig are basically tied for the most being considered by voters, according to Selzer (60 percent supporting or actively considering Buttigieg, 59 percent Warren).

Another point about this chart: voters are actively considering some candidates who are not being discussed as much in the media. Among those, the most likely to be a factor is Klobuchar, but it is worth noting that over one-third of Iowa voters are considering voting for Booker and Yang.  With this many candidates, it will be difficult for either Booker or Yang to contend, but they are on voters' minds more than is generally appreciated.