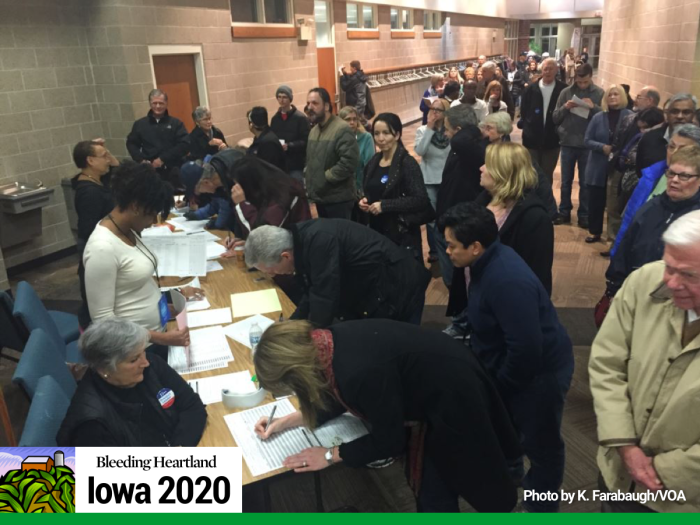 Part 2 in a series on how the Iowa caucuses work

I've written a short book's worth of posts since 2007 on obstacles to attending the Iowa caucuses (see here, here, and here).

Over the same period, John Deeth has written extensively about overcrowded rooms in high-turnout precincts (see here and here).

The Iowa Democratic Party has tried to address both problems this cycle. Even so, many thousands of politically engaged Iowans will be unable to participate tonight. At the same time, Iowans mobilized by several well-organized campaigns will make many precinct caucuses extremely difficult to manage (not to mention fire hazards) in larger counties and college towns.

If we are to remain first in future presidential nominating contests, Democrats must take the obvious step toward making the Iowa caucuses accessible to all and less of a logistical nightmare.

BARRIERS TO PARTICIPATION EXIST DESPITE REFORMS

By now most Bleeding Heartland readers are familiar with why so many Iowans can't participate in the caucuses. The most common problems include:

The Iowa Democratic Party approved a plan last year to let eligible voters participate by phone at six designated times during the week before the caucuses. Though I didn't love everything about the "virtual caucus" proposal, it would have accommodated most people in the above groups. However, the Democratic National Committee determined any phone-in option for caucusing would be vulnerable to hackers.

Plan B was to expand the "satellite caucus" program first tested in 2016. It's better than doing nothing; the 87 satellite caucuses scheduled should accommodate several hundred or perhaps a few thousand people.

On the other hand, most people who work evenings are not in a position to attend a satellite caucus. Think of retail workers, restaurant cooks or servers, health care providers in homes or hospitals, first responders, and so on.

I'm happy for the snowbirds who will attend the eleven satellite caucuses in Arizona, California, Florida, or Tennessee, but they will represent a tiny fraction of those who head south for the winter.

The satellite caucuses are also not a solution for people who need to stay home because of a disability, or to care for relatives. I've taken babies and toddlers to caucuses before, and so do lots of Iowans, but it's tricky and not an option for all parents of young children, especially if any kids in the family have medical or special needs.

Lyz Lenz wrote a good Cedar Rapids Gazette column about the challenges of caucusing with a baby. Elizabeth Warren's campaign is lining up some volunteers to babysit tonight, but you shouldn't need to be plugged in with a field organizer ahead of time to take part in something this important.

The Iowa Democratic Party and county leaders have tried to ensure that every precinct caucus is held in a building that complies with the Americans with Disabilities Act. They also created a process for voters to request an accommodation. Even so, thousands of Iowans who would love to support a candidate tonight will be shut out. Sam Levine's latest story for The Guardian and a recent New York Times article by Maggie Astor are good reads on the continuing barriers affecting Iowans with disabilities.

In smaller communities and rural areas, caucuses rarely strain the limits of any room's safe capacity. But many precincts in larger cities and college towns simply don't have a room large enough to handle the turnout expected for a competitive presidential caucus. My own caucus was far from the biggest in Polk County, but we were bursting at the seams in 2008 and 2016. At least one Des Moines precinct had people standing outside in the cold for part of the evening.

Deeth has been organizing the Democratic caucuses in Johnson County for several cycles. He wrote last month,

We expect to be over 500 in dozens of our 57 precincts. And a caucus process that was designed for 20 to 40 people does not scale up well to a crowd of 500 to 1000. Once you get past the grade school gym capacity of 200 to 250, you can't do any "organizing." It's just crowd control and anger management.

You can do a lot to prepare for 500 people. You can train better, you can get more volunteers. But you can't solve the problem of the biggest room in (or near) the precinct being too small to hold the crowd you KNOW will be there. What is my county party supposed to do, build an 8000 seat arena with a 6000 car parking lot on the east side of Iowa City?

you had to be in the loop during a very narrow window in October and early November to know you needed to ask for a satellite caucus. It will help a few in-the-know snowbirds, the people at Oaknoll [Iowa City's largest retirement community], and the nurses at UIHC [University of Iowa Hospitals and Clinics] and the firefighters at the West Side station who have to work that shift. But it won't get a single body out of our most crowded rooms. Basically everyone at a satellite caucus will be someone who would just not have attended otherwise.

Journalists from around the world will observe some of the most packed caucuses in larger cities, growing suburbs, or college towns. I fear it will be difficult and time-consuming to get an accurate count of each candidate's supporters on the first alignment, because of the challenge of keeping four or more sizable groups physically separate in too-small rooms.

Realignment may go more smoothly now than in the past, because only caucus-goers in non-viable groups will be able to make a second choice. Rooms may become less crowded after the first alignment, as some whose candidates were viable sign their preference cards and go home. But we should brace ourselves for chaotic scenes in some precincts, possibly broadcast on live television. That will become fodder for those who want to sideline Iowa in the future.

Iowans who want to support a presidential candidate but don't care about other party business that happens at the caucuses should be able to participate from home. I liked the virtual caucus concept, but cybersecurity experts are skeptical that any system relying largely on cell phones could be safeguarded from hacking.

That leaves absentee ballots. Iowa Democrats are increasingly comfortable with voting that way; about half the registered Democrats who cast ballots in the 2016 general election or in the last two midterms voted early, either in person or with a mailed ballot.

The privacy associated with voting from home would also open up the caucus process to those who feel inhibited about attending a precinct caucus, either due to social anxiety or a reluctance to make their presidential preference public (a deal-breaker for some business owners or those working in journalism).

Julian Castro argued that early voting with a secret ballot would open up the caucuses to people who may not want to draw attention to their family--for instance, if some relatives are undocumented--or who live in the same precinct as their employer.

The Iowa Democratic Party sought to limit the number of delegates allocated by "virtual" caucus-goers to preserve some incentive to caucus in person. The thinking was, if there's no penalty for participating at home (by phone or with an absentee ballot), some rural precincts may struggle to draw any attendees and won't be able to fill county committee slots.

The thing is, accessibility and representation are core values for many Democrats. It's the 21st century, and people expect to have a voice in choosing the next president. We cannot credibly defend a system that makes it so hard for many to participate, on the grounds that small counties in Iowa need more bodies in the room. As Castro said at a town hall meeting to discuss the role of Iowa and New Hampshire,

What if I told you, what if we didn't know about the Iowa caucus, and I told you look, this is the way that voting is going to be set up. There's no early voting. You can only vote one time at seven o'clock on one night. If you're disabled or if you're a shift worker, and it's hard to get there at that time hey you can't vote by mail, you can't absentee vote. That's the only time that you can vote. You would probably think the Republicans came up with that system of voting. And you would say hey forget it, you know, these Republicans are out to get us again. They're not letting people vote. They're suppressing certain votes of, you know, people with disabilities or shift workers. That's what they have done and we have criticized them for that kind of activity. Well, we have to take a look at our own house.

Others may object that caucuses are not supposed to be an election. Absentee ballots would make our system too much like a primary, causing friction with our friends in New Hampshire.

Reality check: a growing number of Democrats across the country are tired of starting the process in two small, mostly-white states. They will press for overhauling the calendar before 2024, and any big problems in Iowa will bolster their case. So even if you don't care about those excluded from the process, and a few hours of turmoil in some overstuffed precincts doesn't bother you, self-preservation instinct should drive you toward addressing these issues. As I wrote last month,

New Hampshire leaders need to get over their hang-up about not allowing any whiff of a primary here. We’re going to sink or swim together. Iowa needs to be able to show that going forward, every eligible and interested voter will be able to register a preference for a presidential candidate.

The unusually warm (for February) weather and large field of presidential candidates could drive tonight's turnout to record levels. If that happens, we should celebrate, while remembering those who could not be there through no fault of their own. Making our system more like a primary would allow many more, perhaps twice as many, to have a voice in the next Iowa caucuses--if there is a next time.

A collateral benefit: letting a large share of voters express their presidential preference through an absentee ballot would make the in-person caucuses more like the party-building "neighborhood meeting" of decades past.

Top image: Democrats line up to sign in to a caucus in West Des Moines on February 1, 2016. Photo by K.Farabaugh of Voice of America, available through Wikimedia Commons.