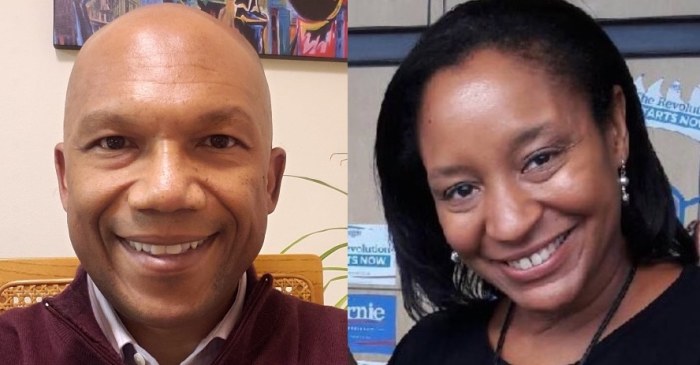 For the first time, a person of color will lead one of Iowa's major political parties. The Iowa Democratic Party's State Central Committee on January 23 chose Ross Wilburn to serve as state party chair for the coming election cycle. Wilburn won on the first ballot in a field of four candidates after Brett Copeland withdrew his candidacy during the committee's meeting.

The two candidates with a strong base of support among the 50-plus State Central Committee members were Wilburn, who received just under 65 percent of the votes, and Jodi Clemens, who received 33 percent. Clemens is a former Iowa House candidate and former staffer on Bernie Sanders' presidential campaign as well as Kimberly Graham's 2020 U.S. Senate campaign. At last year's state convention, she was elected to represent Iowa on the Democratic National Committee. She will continue in that role.

Wilburn has represented Iowa House district 46, covering part of Ames, since September 2019 and will keep serving in the state legislature. However, in order to focus his full-time efforts on leading the Democratic Party, he will quit his other job as diversity officer and associate director for community economic development at Iowa State University Extension and Outreach.

Wilburn grew up in Davenport and attended the University of Iowa while serving in the Iowa Army National Guard. He later was elected to the city council in Iowa City and served as mayor. Wilburn became known to a larger circle of Democrats as a candidate for governor during the 2018 cycle. In the state House he is ranking member on the Veterans Affairs Committee and a member of the Appropriations, Judiciary, and State Government committees as well as the Black Legislative Caucus.

Speaking to the party's governing body, Wilburn called for year-round organizing, along with better messaging and candidate recruitment to improve Democratic performance, Erin Murphy reported for the Lee Newspaper group. He said “We must engage more Iowans and convince the working class, farmers, factory workers, and our diverse constituencies that our party is on their side and will be at their side."

After his election, the new Democratic chair told reporters that he's "honored" to be the first Black Iowan to lead a political party "and is committed to ensuring he's not the last," Brianne Pfannenstiel reported for the Des Moines Register.

June Owens, who is also Black, will continue as the Iowa Democratic Party's first vice chair, a position she has held since December 2019. Following Wilburn's election as state party chair, Owens was chosen by acclamation after no one else was nominated. The first vice chair is traditionally a voting member of the DNC, but only if the person is a different gender from the state party chair. For that reason, Tanner Halleran, who had been campaigning for first vice chair, ended up being nominated and elected to continue as the party's second vice chair instead.

The IDP's new third vice chair is Chris Adcock, a former Iowa House candidate and chair of the Page County Democrats. She and Halleran, who leads the Keokuk County Democrats, will ensure that rural voices are represented in party leadership. The State Central Committee also re-elected Ken Sagar as party treasurer and Don Ruby as secretary.

One of Wilburn's first tasks will be to hire a new executive director, as Mike Frosolone is leaving that job. Frosolone joined the party staff when Mark Smith became state chair in the aftermath of the Iowa caucus controversy. Smith announced soon after the November election that he would not seek another term in the position.

Wilburn told reporters on January 23 that he will work with new DNC chair Jaime Harrison to make the case for preserving the Iowa caucuses as the first presidential nominating contest. Although protecting the caucuses will obviously be a priority for our state's five voting members of the DNC--Wilburn, Owens, Clemens, Scott Brennan, and Jan Bauer--I expect that to be a losing battle. Many Democrats around the country share Julián Castro's view that caucuses are inherently disenfranchising and that the process should begin in more diverse states than Iowa and New Hampshire. President Joe Biden certainly doesn't have any reason to preserve the caucus system.

The best-case scenario for Iowa would be some relatively early slot in a revised calendar. More likely, the DNC will ban caucuses for the purpose of expressing a presidential preference. I would encourage Iowa Democratic officials and State Central Committee members to start planning for a post-caucus future.