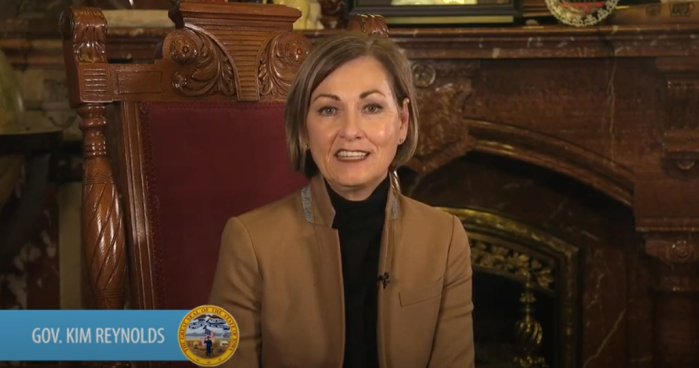 Ethics board again defers to governor on self-promotion law

The Iowa Ethics and Campaign Disclosure Board unanimously found that Governor Kim Reynolds did not violate a state ban on “self-promotion” last year when she appeared in advertisements promoting COVID-19 safety measures.

The board reviewed the “Step Up, Stop the Spread” online and television ad campaign, funded through federal COVID-19 relief dollars, after State Auditor Rob Sand asserted in a report that Reynolds violated a state law prohibiting “self-promotion with taxpayer funds.”

“COMPLETELY COMPLIED” WITH THE SELF-PROMOTION LAW

Board members discussed the audit report and the governor’s response in closed session during an August 12 meeting. Summarizing the deliberations in open session afterwards, board chair James Albert highlighted the first eight words of Iowa Code Chapter 68A.405A: “Except as provided in sections 29C.3 and 29C.6 […]” The governor’s office has maintained that clause allows Reynolds to appear in any publicly-funded material related to a state of emergency.

Albert said the ethics board’s attorneys found the commercial was entirely about the COVID-19 pandemic, and therefore Reynolds “completely complied with the self-promotion statute.”

The governor’s communications director Pat Garrett hailed the board’s finding in a written statement: “The governor was right and her actions were supported by both Iowa law and common sense.”

“OPEN SEASON” FOR REYNOLDS “TO ADVERTISE HERSELF” USING PUBLIC FUNDS

The State Auditor’s office has argued “it is necessary to read all provisions of Iowa Code 29C.6 together.” While the governor has the authority to suspend the operation of any state law in a public health emergency, Reynolds never mentioned the self-promotion law in disaster emergency proclamations that suspended the operation of dozens of other statutes or administrative rules.

Albert said the ethics board’s attorneys “found no merit” in the auditor’s legal analysis, because the opening clause of the code section exempts emergencies.

It is a sad day for Iowa taxpayers and for the rule of law when a Board full of the Governor’s own appointees decides she can do what the law against self-promotion with taxpayer funds clearly makes illegal – especially after her “emergency” justification for it included two plainly false statements. It is now open season for the Governor to use your own money to advertise herself to you however she likes.

The six members of the Iowa Ethics and Campaign Disclosure Board were all appointed by Reynolds or her predecessor, Governor Terry Branstad.

A PATTERN OF DEFERRING TO GOVERNOR

The outcome on August 12 was expected, given the ethics board’s past deference to Reynolds, even when presented with what appear to be obvious violations of state law.

In 2018, the board’s executive director Megan Tooker gave Reynolds’ staff prior approval to continue to use this booth at the Iowa State Fair’s Varied Industries Building. 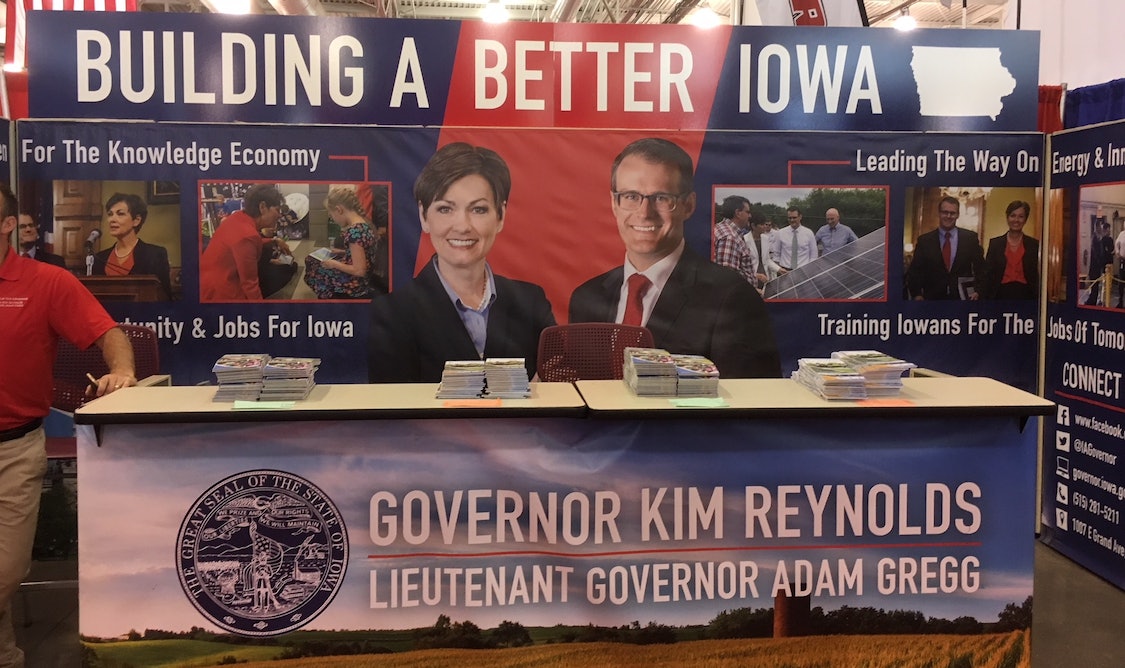 The relevant Iowa Code section prohibits using public money for “any paid advertisement or promotion” bearing a statewide elected official’s “written name, likeness, or voice” on a “paid exhibit display at the Iowa state fair.” Every other statewide official redesigned their Iowa State Fair booths to remove their names and pictures after Reynolds signed the self-promotion ban into law.

But the ethics board adopted an advisory opinion (authored by Tooker) that allowed the continued use of items purchased before July 1, 2018. The upshot is that the governor’s office was permitted to keep spending public money year after year to rent space for a booth precluded by a plain reading of the law.

Later in 2018, the ethics board found Reynolds did not violate Iowa’s gift law by having a state vendor donate the use of a private plane to fly the governor and her husband to an Iowa State University football bowl game in 2017. The board also dismissed a related complaint, which asserted the Reynolds campaign “underreported the fair market value” of that private jet service. The governor’s campaign reported the value of the in-kind contribution at $2,880, but Des Moines attorney Gary Dickey found it would cost far more to charter a round trip between Des Moines and Memphis, Tennessee.

Any board that has no problem with the governor promoting herself at the state fair or accepting free flights from a state vendor was never going to find fault with a COVID-19 public service announcement.