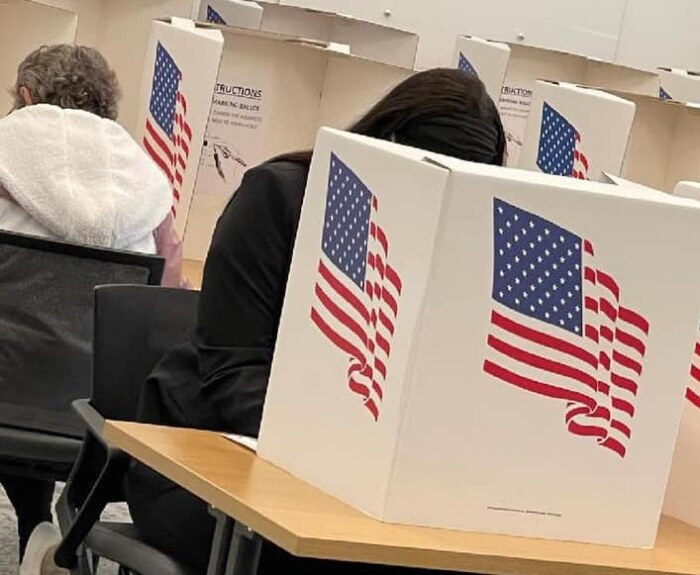 Iowa progressives and conservatives both had reasons to celebrate following this year's city and school board elections. These races are nonpartisan, but Democratic and Republican organizations have been increasingly involved in getting out the vote for school board or city council candidates.

HISTORIC WINS FOR CANDIDATES OF COLOR

Waterloo's first Black mayor, Quentin Hart, easily won a fourth two-year term, and Iowa's eighth largest city became the state's first to have a Black majority on the city council. Rob Nichols won the at-large seat by 19 points, John Chiles won narrowly in Ward 1, and Nia Wilder won comfortably in Ward 3. (Wilder will be Waterloo's first out LGBTQ city council member as well.) Ward 4 incumbent Jerome Amos, who was not up for re-election this year, is also Black. Waterloo has long had a larger percentage of Black residents than any other Iowa city; nearly 18 percent of its residents are African American, according to the 2020 census.

The results were striking because a new political action committee called Cedar Valley Backs the Blue has been bashing the mayor and Waterloo Police Chief Joel Fitzgerald, who is also Black. The PAC was outraged by the city council's recent decision to remove the Waterloo Police Department's griffin logo, which resembles KKK imagery.

Portraying Hart as anti-police was unwarranted, since the department's budget has increased during his tenure. But this campaign wasn't really about policy disagreements. Cedar Valley Backs the Blue put up billboards suggesting Waterloo's "radical mayor" was making the city like Chicago—a classic racist trope—and complained that he "disgrace[d] the mayor's office" by lip-syncing to Montell Jordan. Kudos to Waterloo voters for rejecting this race-baiting.

The winners in Waterloo were among more than a dozen Black candidates elected to school boards or city offices. Dana James published the rundown at Black Iowa News. Some were incumbents who were expected to win again (like Iowa City Mayor Bruce Teague) or running unopposed (like West Des Moines City Council member Renee Hardman and Des Moines school board member Teree Caldwell-Johnson).

Others went into their campaigns as underdogs. Indira Sheumaker defeated two-term incumbent Bill Gray in Des Moines' Ward 1. Four years ago, Gray was re-elected without a challenger. But Sheumaker and a small army of volunteers executed a tremendous ground game to engage residents who hadn't voted in previous elections. The campaign used money raised from more than 1,000 individual contributions in creative ways to expand the electorate. The Des Moines Register's Melody Mercado and Brianne Pfannenstiel reported last week,

A field director with Sheumaker's campaign told the Register they estimate they'll be able to reach about 700 people with their Spanish material and 250 people for each of the four other languages.

Unofficial results show Sheumaker received 2,502 votes (46.4 percent) to 1,960 for Gray (36.3 percent) and 908 votes (16.8 percent) for Marcus Coenen. She is the first Black woman elected to the Des Moines council since Willie Glanton served during the 1980s. (The capital city used to hold runoff elections if no candidate received 50 percent of the vote in a race, but the Des Moines switched to a plurality election system last year.)

Cedar Rapids still has a runoff system, and mayoral candidate Amara Andrews, who is Black, edged out incumbent Brad Hart for a spot in that runoff. Andrews received about 28 percent of the vote (just 24 votes more than Hart) and will face Tiffany O'Donnell, who received about 42 percent of the vote, on November 30. Cedar Rapids has never elected a Black woman to the city council. Dale Todd, who became the city's first Black elected official during the 1990s, was re-elected easily.

West Liberty, a town with nearly 4,000 residents in Muscatine County, was the first Iowa municipality to have a majority Latino population, according to the 2010 census. Soon it will be the first Iowa community to have a Latino majority on the city council, as Dana Dominguez and Omar Martinez won seats last night. They will join current council members Cara McFerren (the town's first Latina council member) and Jose Zacarias.

SCHOOL BOARD RACES A MIXED BAG

For many years, Iowans elected school boards in September and city officials in November. Republicans combined the two elections, beginning with the 2019 cycle. The idea was to increase turnout, and (the GOP hoped) reduce the influence of the teachers' union on school board races. Turnout was substantially higher on November 2 than in the typical school board elections of years past, but conservative candidates had mixed results.

Two years ago, labor-backed candidates did well in most of Iowa's large school districts. This year, issues related to collective bargaining and working conditions were less salient. Instead, controversies over mask mandates and other COVID-19 mitigation practices dominated many campaigns. Republicans also made false claims about indoctrination or "critical race theory" in some districts, even though that concept has never been taught in any K-12 schools in Iowa.

In several communities, conservative school board candidates ran on slates. They swept the board in Johnston, where the winning candidates had signed a "1776 Pledge to Save Our Schools," echoing Trumpian themes of white grievance. Conservatives also won all three seats in Ankeny, where Governor Kim Reynolds had endorsed one of the winning candidates. Turnout was much higher than in 2019, indicating the backlash against mask mandates was an effective campaign tool.

On the other hand, anti-mask candidates didn't win a single school board race in Des Moines, Cedar Rapids, Davenport, West Des Moines, Ames, or Waukee, where a new PAC and the Dallas County Republican Party had heavily promoted the pack of four candidates. In the Urbandale and Linn-Mar districts, school board candidates supporting a science-based approach to reducing COVID-19 spread won two of the three seats.

Please post a comment in this thread or let me know about any noteworthy election results in your area.

Final note: In my hometown of Windsor Heights, the latest elections were unusually low-key. Sidewalks (yes, sidewalks) and the speed limit along University Avenue have been hot-button issues for much of the past two decades in this "inner-ring" suburb west of Des Moines. But this year only two candidates (Joseph Jones and Lauren Campbell) filed for three available city council seats, prompting Michael Libbie to run what appears to have been a successful write-in campaign.