Republican-aligned candidates had mixed results in this month's city and school board elections across Iowa, but they swept the board in the Des Moines suburb of Ankeny. Not only did mayoral candidate Mark Holm win by 20 points, both Republican candidates for city council (Kelly Whiting and Joe Ruddy) were elected, as were all three school board candidates campaigning against mask mandates (Joy Burk, Trent Murphy, and Sarah Barthole).

In contrast, anti-mask candidates for school board were shut out in many other large Iowa school districts, including Cedar Rapids, Davenport, West Des Moines, Ames, and Waukee. Candidates taking the same stance won only one out of three available seats on the Urbandale and Linn-Mar school boards.

Although no single factor fully explains the GOP's success in Ankeny, conservative candidates benefited from an unusual level of partisan spending on what are nominally nonpartisan races in Iowa. The likely result will be more spending by political parties to promote future candidates for city and school offices.

The Republican Party of Iowa sent out this piece shortly before the November 2 election. This kind of campaign literature is typical of a state legislative race; I am not aware of any precedent for a state party in Iowa paying for this kind of mailing for a local or school board election.

Staff for the Iowa GOP didn't respond to an inquiry about the cost of this mailing. The next deadline for reporting state party fundraising and spending to the Iowa Ethics and Campaign Disclosure Board is January 19, 2022.

Ankeny's Mayor-elect Holm told Bleeding Heartland in a November 4 telephone interview that "the money was raised at the local level," and given to the state party because it would be more efficient for them to purchase the advertising. He said state party funds were not used, and to his knowledge, no candidate funds were used. The money was raised through the Ankeny Republicans PAC. He spoke at a fundraiser the PAC held in early October.

The Ankeny Republicans PAC was established this year as a state political action committee. Because it wasn't registered as a city or school PAC, it wasn't required to disclose any fundraising or spending before the November 2 election. The PAC's treasurer Steve Boal didn't respond to phone or email messages, and attempts to reach chairperson Cheryl Weisheit were also unsuccessful.

We'll find out in January how much the PAC raised and spent to support the local and school candidates. In addition to the direct mailing, campaign literature handed out on doors promoted the GOP-aligned candidates. The PAC also paid for a large electronic billboard on a busy street (North Ankeny Boulevard). An Ankeny resident provided the following photos: 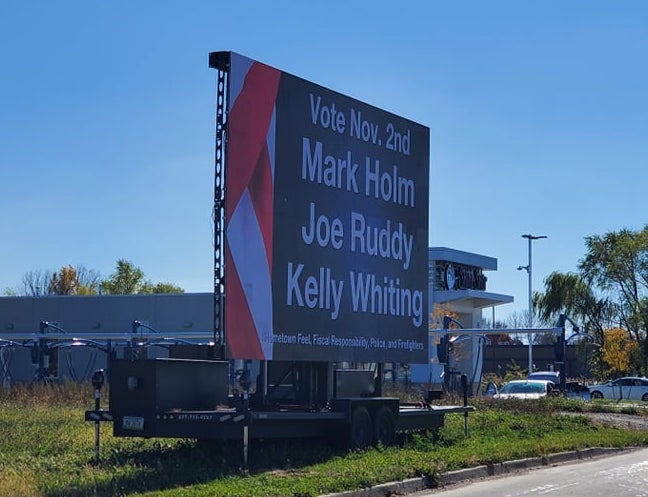 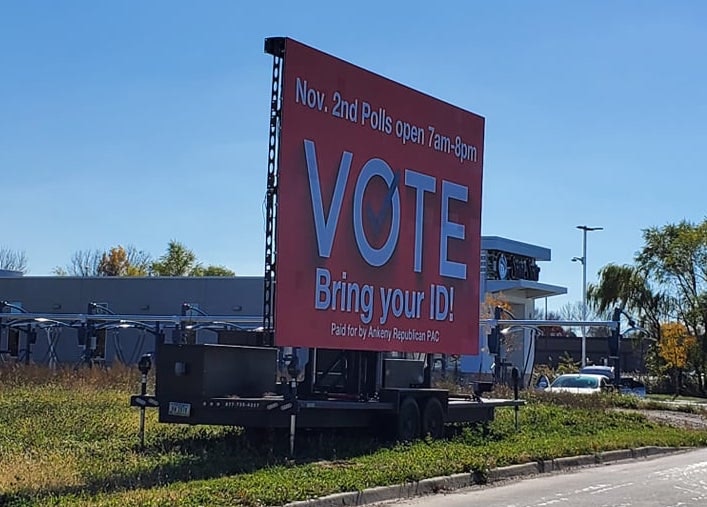 Turnout across Iowa was nearly 20 percent higher this year than in 2019, the first year our state combined city and school elections. But in several Des Moines suburbs, the turnout increased by much more than that, and nowhere more than in Ankeny. In 2019, the district's winning school board candidates received around 2,000 votes, and that year's winning city council candidates received between 2,179 and 3,132 votes.

This month, the three unsuccessful school board candidates (who were supported by many Ankeny Democrats) received between 6,564 and 7,316 votes, while each of the Republican-backed candidates gained more than 8,000 votes.

It's difficult to quantify the impact of paid advertising on voters, but the direct mail and billboard likely reached many registered Republicans who don't normally participate in local elections. And running as a slate likely helped the GOP-aligned candidates, since party affiliation is not listed on ballots for city and school elections in Iowa.

Also worth noting: Governor Kim Reynolds personally endorsed school board candidate Barthole, and the GOP spent six figures before a September special election for an Iowa House seat in the area.

The Ankeny candidates did spend some of their own campaign funds as well—for instance, Burk loaned her school board campaign more than $10,000 for signs and cards. Holm told me he knocked about 500 doors and estimated that the GOP-aligned candidates and volunteers canvassed around 4,000 households. But the PAC and state party spending must have reached a larger voter universe than the candidates would have managed on their own.

During our interview, Holm said his earlier campaigns for city council have "never been about left or right." He described it as "unfortunate" that the parties got more involved in local races. But he noted that when he ran successfully for city council in 2019, Polk County Democrats created a meme listing him as part of a supposedly "shady bunch." Holm considers the Ankeny Republicans PAC "a reaction to an action."

Iowa Democratic activists have become more engaged in city and school elections since 2017, especially in several of the Des Moines suburbs. Those efforts have been grounded in volunteer work like knocking doors and writing postcards. I'm not aware of any PAC or state party spending on recent local elections to benefit Democrats, certainly not comparable to what happened in Ankeny on the Republican side.

In Johnston, the other Des Moines suburb where conservatives won all the November 2 school board races, a national organization called 1776 Action spent money promoting GOP-aligned school board candidates. (The city council races in Johnston went to Rhonda Martin and James Evans, both incumbents.)

While Holm is a registered Republican, he told me he would like future city elections to be just about "candidates and policies, and not about left or right." But he acknowledged that "the utopia of nonpartisan politics" may be a closed chapter, and the successful GOP effort in Ankeny may be a "template" for Iowa's local elections going forward.

You can take that to the bank. Investing in these races helps Republicans influence local policy in the short term and build the party's bench for the long term. Many Iowa state legislators previously served on city councils or school boards.

I'll update this post when the Iowa GOP and Ankeny Republicans PAC report on their 2021 campaign spending.

Polk County GOP Chair Gloria Mazza congratulated the school board candidates, regardless of whether they won. Mazza also highlighted the Ankeny mayor and city council races as wins for the Republican parties.

Scott and Sen. Joni Ernst framed the local races as fertile ground for Republican politics. Scott said he believes “the school board races are going to change the country.”

“We see it starting at the school board. We see it with our supervisors’ races, our city councils. Republicans are rising,” Ernst said.