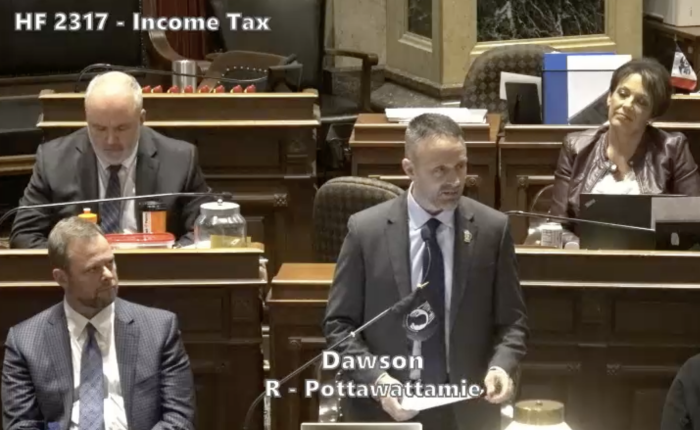 Democratic lawmakers decried the cuts as unfair, noting that the Republican plan would make Iowa's tax system more regressive and would not address key workforce problems, such as the high cost of child care. It would also give some 3,000 Iowans earning more than $1 million per year an average tax cut of $67,000 each year—more than 100 times as much as what the average Iowa household (with annual income around $68,000) would receive in tax cuts.

While those points are important, this post will focus on another problem with the GOP approach. If the experiences of Kansas and Louisiana are any guide, Iowa's state government will soon face a fiscal mess.

WHAT THE BILL DOES

House File 2317 would gradually move Iowa from a progressive income tax structure to a flat tax of 3.9 percent for individuals while exempting all retirement income from state taxes. According to the nonpartisan Legislative Services Agency, the income tax cut alone would cost the state nearly $217 million in revenue in the next fiscal year. The cost would more than double during fiscal year 2024, topping $1.2 billion in lost revenue by fiscal year 2026, and nearly $1.7 billion in fiscal year 2028. Last year, individual income taxes accounted for about $4.25 billion out of $8.8 billion in general fund revenue.

The bill would also reduce corporate taxes by $19.6 million next year and by $229.4 million when fully phased in, the Legislative Services Agency calculated. The analysts' fiscal note covers less expensive provisions in the bill as well.

A Common Good Iowa fact sheet contains more details about the bill, including how it would shift more of the state's tax burden toward Iowans earning lower incomes. Excerpt:

Common Good Iowa also pointed out that the tax plan would worsen Iowa's existing racial inequities and would not influence seniors' decisions on whether to stay in Iowa or leave.

Not meaning to take away from those arguments, it's important to note that Republicans have likely set Iowa on track for fiscal disaster.

THE FAILURE OF THE KANSAS EXPERIMENT

Kansas Governor Sam Brownback became the poster child for ill-advised tax cuts during the last decade, when he and a Republican-controlled legislature approved some of the "deepest tax cuts ever enacted" in the U.S. Michael Mazerov explained in an article for the Center on Budget and Policy Priorities,

Brownback claimed his plan would make Kansas "as competitive as possible in attracting new businesses and generating economic and private sector job growth." But as Mazerov showed, during the four and a half years the tax cuts were in effect, private sector job creation in Kansas 'was lower than all neighboring states except Oklahoma and lower than all 50 states taken together." In addition, "Kansas’ private-sector economy grew more slowly than the United States and all of its five neighbors." The labor force participation rate did not increase significantly, and Kansas underperformed most of its neighbors in business formation.

Meanwhile, the social costs of the tax cuts were enormous. From a Common Good Iowa fact sheet about the Republican tax cut bill:

Experience shows tax cuts of this magnitude don’t pay for themselves — and are not popular. Kansas lawmakers passed big tax cuts back in 2012 and 2013. Then when revenues crashed in subsequent years, they used up reserves, postponed projects, and skipped payments to the pension fund. Districts closed schools early when funds ran out. Political backlash ensued. A half-decade after most tax cuts were repealed, Kansas still has a negligible rainy-day fund and its public employee retirement system is dangerously underfunded.

The results were so devastating that a Republican-controlled legislature not only repealed most of the tax cuts in 2017, but mustered a large enough majority to override Brownback's veto of the repeal bill. Laura Kelly won the 2018 governor's race, becoming the first Democrat to hold that office in Kansas since Kathleen Sebelius won the 2006 election.

The Kansas experience was not isolated.

Not long ago, Louisiana Governor Bobby Jindal was considered a credible Republican candidate for president. But commentators on the left and on the right agree that Jindal "wrecked" Louisiana through unsustainable tax cuts.

“Since I’ve been in Louisiana I’ve never seen a budget cycle as desperate as this one,” said Robert Travis Scott, the president of the Public Affairs Research Council, a nonpartisan group based in Baton Rouge.

Louisiana’s budget shortfall is projected to reach $1.6 billion next year and to remain in that ballpark for a while. The downturn in oil prices has undoubtedly worsened the problem, forcing midyear cuts to the current budget. But economists, policy experts and lawmakers of both parties, pointing out that next year’s projected shortfall was well over a billion dollars even when oil prices were riding high, turn to a different culprit: the fiscal policy pushed by the Jindal administration and backed by the State Legislature. [...]

Mr. Jindal’s first term began in 2008 with a heady surplus of around $1 billion, high oil prices and a stream of federal disaster recovery money after Hurricanes Katrina and Rita in 2005. He threw his support behind the largest tax cut in the state’s history and, for a time, had reason to boast about an economy that outperformed the nation’s. But oil prices are fickle, and the recovery money dried up and the recession arrived, if late and in a milder strain than in other states. [...]

Those policies did not produce a booming economy. “The underlying economy has been weaker or more sluggishly growing than we might want to believe,” said Greg Albrecht, the chief economist for the Louisiana Legislature [in 2015], ticking off a list of metrics that are not picking up steam, including total payroll employment growth and personal income tax receipts.

As in Kansas, Jindal turned to various gimmicks to close the budget gap. Robin Respaut and Brian Thevenot reported for Reuters in 2016,

Having signed a pledge not to raise taxes, Jindal turned to one-time fixes, such as offering tax amnesty to delinquent taxpayers and raiding state trust funds. That included drawing down $520 million from the Medicaid Trust Fund for the Elderly and $540 million from a reserve fund for state employee healthcare, according to Republican state Treasurer John Kennedy.

Jindal failed last year to sell the state’s tobacco settlement, worth $1.2 billion over time, for an upfront lump sum of $750 million - a move Kennedy compared to “a junkie selling his TV or smartphone to buy another fix.”

Lawmakers now face tough choices. Healthcare and education budgets - particularly colleges - already have been slashed and could see more cuts. And legislators are considering raising sales taxes by up to 2 cents.

Higher education was particularly hard hit. Michael Mitchell reported for the Center on Budget and Policy Priorities in 2015,

Tuition has risen dramatically at Louisiana’s public four-year institutions — by 67 percent since the recession started — but those increases fall far short of covering losses in state funding.  To fill the gap, many schools have cut their own budgets, partly by eliminating staff and courses.  For example, the Louisiana State University System furloughed 727 employees, laid off another 210 staff and faculty members, and cut 217 academic programs between 2008 and 2012.

Louisiana has cut higher education funding per student by 42 percent since 2008, after adjusting for inflation.  Only Arizona has cut more.

Reynolds asserted last week, "There’s never been a better time in Iowa for bold, sustainable tax reform. This bill rewards work, takes care of our farmers, and supports our retirees, all while protecting key state priorities." She is sure to brag about a "historic" and "responsible" tax cut when she appears on national television this Tuesday.

Before commentators hail her as the next GOP rising star, they should ask themselves what Sam Brownback and Bobby Jindal have been up to lately.