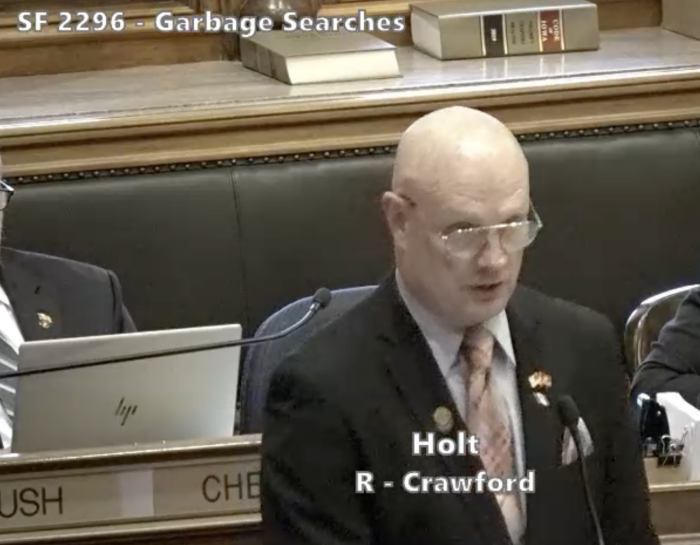 Iowans have "no reasonable expectation of privacy in garbage placed outside of the person's residence for waste collection in a publicly accessible area," according to a bill Governor Kim Reynolds signed into law on April 21.

Whether the new law can withstand scrutiny is unclear. Attorneys who opposed the bill have pointed out that the legislature and governor cannot override the Supreme Court's interpretation of the state constitution. But it could be years before a challenge to the law reaches the high court.

In State of Iowa v Nicholas Dean Wright, a defendant appealed his conviction on drug charges. A Clear Lake police officer had used material obtained from several trash pulls to support a subsequent request for a search warrant. Four justices held that the officer

conducted an unreasonable search and seizure in violation of article I, section 8 of the Iowa Constitution when he acted without a search warrant and removed opaque trash bags from waste bins set out for collection behind a residence, took possession of the trash bags, transported them to a different location, opened the bags, and searched through the contents.

The majority opinion by Justice Christopher McDonald, joined by Justices Dana Oxley and Matthew McDermott, and in part by Justice Brent Appel, also noted that "Garbage contains intimate and private details of life." The defendant "had an expectation based on positive law that his garbage bags would be accessed only by a licensed collector under contract with the city."

Article I, Section 8 of the Iowa Constitution reads, "The right of the people to be secure in their persons, houses, papers and effects, against unreasonable seizures and searches shall not be violated; and no warrant shall issue but on probable cause, supported by oath or affirmation, particularly describing the place to be searched, and the persons and things to be seized." It is nearly identical to the Fourth Amendment to the U.S. Constitution.

The U.S. Supreme Court has ruled in recent decades that the Fourth Amendment does not require law enforcement to obtain a search warrant for trash left outside a residence. But according to the Iowa Supreme Court majority in Wright, the current federal doctrine "departs from the text and original meaning of the constitutional prohibition against unreasonable seizures and searches."

In a special concurrence, Appel argued that the U.S. Supreme Court "has tended to embrace rights-restricting radical pragmatism, where the perceived needs of law enforcement are consistently permitted to overwhelm the libertarian principles behind search and seizure law."

The Iowa Supreme Court's majority opinion came down on the side of libertarian principles.

The State contends [Officer] Heinz’s conduct here was justified for practical reasons. The State contends that holding Heinz’s conduct violated the constitution “would result in the demise of trash grabs of personal trash containers.” We do not question the utility of warrantless trash grabs for the purposes of law enforcement, but the utility of warrantless activity is not the issue under our constitution.

The perceived needs of law enforcement were the driving force behind Senate File 2296.

The Republican floor managers of the bill, State Senator Dan Dawson and State Representative Steven Holt, both have law enforcement backgrounds. Dawson is a special agent with the Iowa Division of Criminal Investigation, and Holt is a former deputy sheriff and police chief.

Senate File 2296 amends Iowa Code Chapter 808.16 to clarify, "It is the public policy of this state that a person has no reasonable expectation of privacy in garbage placed outside of the person’s residence for waste collection in a publicly accessible area."

City or county ordinances on waste management "shall not be construed by a person to create a reasonable expectation of privacy in garbage placed outside of the person’s residence for waste collection in a publicly accessible area."

In addition, the the law stipulates that garbage placed outside a person's residence "shall be deemed abandoned property and shall not be considered to be constitutionally protected papers or effects of the person," and that a peace officer may search and seize "garbage placed outside of a person’s residence for waste collection in a publicly accessible area without making an application for a search warrant."

The bill does not define "publicly accessible area."

The Iowa Senate approved Senate File 2296 unanimously in February after only a few minutes of debate.

Introducing the bill on the House floor last month, Holt said the measure was "necessary" because the Iowa Supreme Court had turned "decades of precedent on its head" and eliminated "one of law enforcement's most vital tools in solving crimes." The bill would return Iowa to the "status quo," according to Holt. Several law enforcement groups lobbied for the legislation.

"THIS BODY DOES NOT HAVE THE LEGAL AUTHORITY"

Democratic State Representative Mary Wolfe spoke against Senate File 2296 during the House debate. This video shows the key part of her remarks:

A defense attorney by trade, Wolfe briefly summarized the Iowa Supreme Court ruling, noting that its author was appointed by the current governor. She acknowledged that reasonable people can disagree over "whether Iowa citizens should have a protected liberty interest in their trash."

But the Iowa Supreme Court is the final arbiter over the state constitution, Wolfe added, "And this body does not have the legal authority to legislate that constitutionally protected liberty interest away."

The Democrat pointed out that Republican lawmakers are aware of this, because after the Iowa Supreme Court ruled in 2018 that the state constitution protects a woman's right to an abortion, the legislature did not simply pass a law declaring that women don't have a right to an abortion. Rather, Republican lawmakers started the process of amending the state constitution, which takes years.

That's how you take away a constitutional right. It's not easy, and it's not fast, and that's good. It shouldn't be easy to take away constitutionally protected liberty rights from Iowa citizens.

Some may find the court ruling silly, or think they wouldn't have any problem with officers searching their own trash. None of that matters, Wolfe said. "Our Supreme Court says, this is a constitutionally protected liberty right. And if you want to strip it away from Iowans, you have to do the work and go through the steps to amend the constitution."

Wolfe concluded by predicting that the bill would be ruled unconstitutional.

During his closing remarks in support of the bill, Holt responded to some points Wolfe raised.

Holt said legislatures "routinely pass legislation" to address court rulings "that change the status quo." (He did not respond to Bleeding Heartland's messages seeking examples of such legislation. I suspect he was thinking about bills that clarified portions of Iowa Code after the Supreme Court had interpreted a statute, not sections of the state constitution.)

The floor manager also explained why searches of abandoned garbage can be a useful law enforcement tool. He pointed out that the bill had passed the Iowa Senate unanimously. (None of the Iowa Senate Democrats are criminal defense attorneys like Wolfe.)

Regarding privacy concerns, Holt asserted the bill was talking about "publicly accessible areas, such as curbs and sidewalks. We're not talking about garbage outside on your back porch [or] in your yard." He described the legislation as not "groundbreaking," but simply returning to the previous understanding that Iowans have "no expectation of privacy in a publicly accessible area."

A publicly accessible area could mean almost "anywhere on the property, including unlocked garages." What if someone locks a trash container or dumpster, or labels it "Private Property—Do Not Enter," Wolfe wondered. Can police cut the lock or search the trash anyway?

She had other concerns as well.

I would just point out that if trash set out for collection is abandoned, and citizens have no ownership interest in their trash once they set it outside their residence, then arguably anyone has a legal right to take the bag of trash, go through it, photograph the contents and display them on social media, no matter how personal or embarrassing. Including medical information gleaned from empty pill bottles, since HIPAA [a federal law relating to medical privacy] doesn't apply to private persons.

WILL THE LAW BE STRUCK DOWN?

Reynolds' staff have not responded to Bleeding Heartland's questions about using a state law to override the Supreme Court's interpretation of the state constitution. The governor did not issue a public statement about Senate File 2296 or any of the other 25 bills she signed last week.

The Iowa Supreme Court held that your individual constitutional protection against warrantless searches of your personal property extend to the garbage can in your yard or at your curb. Law enforcement’s wish to pick through your property without justifying a probable cause to a judge and securing a warrant IS unconstitutional. Passing a statute does not change that fact. On SF 2296, this legislature sided with government overreach, rather than the constitutional freedoms of Iowans.

Eventually, the Iowa Supreme Court will likely confront this question again, when some defendant convicted on evidence seized from a warrantless trash pull appeals the conviction.

Normally, the court follows its own recent precedents. But State v Wright was a 4-3 decision. The dissenters would have taken the U.S. Supreme Court's approach. By the time any new case reaches the court, Appel will have retired. How his successor will view search and seizure jurisprudence is anyone's guess.

It's also possible that some justices who joined the Wright majority opinion will align with law enforcement in similar future cases. In two Iowa Supreme Court decisions published on April 22, six justices determined that officers can conduct warrantless searches of passengers in cars pulled over for routine traffic stops. (One was a Lyft passenger.)

Appel wrote lengthy dissents in both cases, arguing that the court should have ruled such searches a violation of Article I, Section 8 of the state constitution. Dissenting from the majority in State of Iowa v. Kha Len Richard Price-Williams, Appel observed that "historically, search and seizure law was motivated not simply to protect individual rights, but also to ensure that disfavored groups are not singled out through indiscriminate application of government power." He cited extensive research on implicit bias and how Black Americans are disproportionately subjected to traffic stops and "stop and frisk" policing.

UPDATE: Pete McRoberts provided this comment on behalf of the ACLU of Iowa, which lobbied against Senate File 2996.

Most Iowans would agree that what's in their trash cans left out on the curb--revealing everything from what you had for dinner the night before, to your credit card and bank statements, what prescription drugs you are taking, what your receipts say you purchased at the store, what magazines or publications you read, or whether you're on your period--is private.

They certainly don't expect that other people would have a right to rifle through those things and learn that information about them without their consent, and it's reasonable to expect that police would have to go through the relatively simple, easy, and quick process of getting a judge's okay through a warrant to do so, too, when they suspect someone has engaged in a crime. We believe the government should protect privacy rights, and not diminish them.

For these reasons, we agreed with the bipartisan group of state legislators who opposed Senate File 2296, and were hopeful that Governor Reynolds would veto this piece of legislation. Even though this bill is now law, we will continue to work with legislators in the future on this issue, so that our laws reflect our common and long-held commitment to privacy in Iowa.