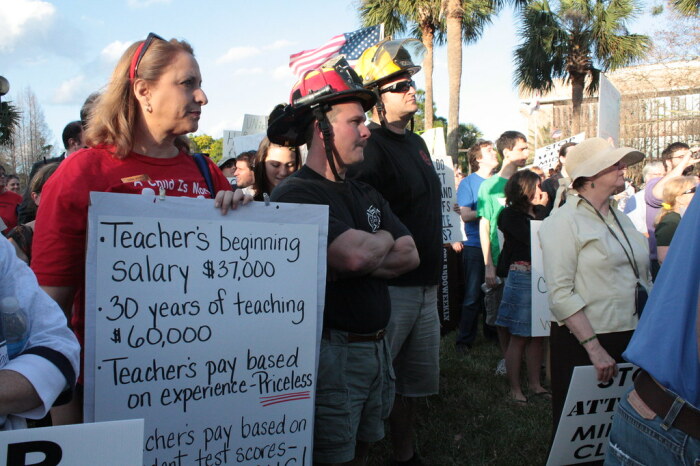 In 2019 I wrote a Bleeding Heartland article about the growing disparity between administrative and teacher salaries. At the time I didn’t anticipate that the situation would get much worse. I hoped that Iowa's ever-increasing rainy day funds might be used when pay became more of a problem.

Regrettably, here I am again three years later, encouraging Iowans to focus on what has become a major issue.

OTHER STATES ACTING ON TEACHER PAY

Several states have recently launched teacher pay initiatives. New Mexico Governor Michelle Luhan Grisham signed into law a bill that raised teacher salaries by as much as 20 percent and which created a minimum salary of $50,000. The new law will also raise the average salary for a New Mexico teacher to $64,500 per year.

Even in Florida, anti-public education Governor Ron DeSantis announced he would funnel $800 million from the state budget into a plan that would raise the minimum salaries in that state to $47,000. Governors in Mississippi, Alabama and Georgia have also signed into law plans to raise teacher salaries in those states. Large state budget surpluses (stemming from a huge influx of federal funds during the pandemic) made such programs possible.

Although Iowa also has a large state budget surplus, Governor Kim Reynolds has introduced no plan to increase teacher pay, other than offering a one-time, $1,000 bonus for which only some educators qualified. Instead, the governor has prioritized policies that would make teaching more difficult and provide additional incentives to private schools.

Since I wrote that 2019 article, the average regular teacher salary in Iowa—which includes neither pay for extra duty nor pay for the Teacher Salary Supplement—has increased by only $1,997, to $57,427 per year.

Not only has the average salary been relatively stagnant, so has the pay for beginning teachers. According to the most recent figures reported by the National Education Association, Iowa now ranks 36th in starting pay for teachers.

The lack of attention to teacher salaries is even more appalling when you consider that Iowa ended the 2021 fiscal year with a surplus of $1.24 billion and is expected to have another huge surplus for the fiscal year that ended on June 30. Reynolds hasn't promised to raise teacher pay, and neither have Republican candidates for the state legislature. Only Democratic candidates have prioritized it.

Changes to Iowa’s collective bargaining law in 2017 are partly responsible for the relatively meager pay increases. Those changes made it illegal to bargain on almost anything except for base salary. Some districts have chosen to unilaterally bargain with teachers on a traditional salary schedule, but even in those cases the playing field has tipped to strongly favor school districts.

Some legislators have advocated limiting the share of a school budget that could be spent on administrative costs. This article should not be construed as a call to limit administrative salaries. The salaries paid to school administrators in Iowa are not out of line with their peers in other states. Instead, we need to look for ways to bring teacher salaries more in line with what administrators are making.

In all the discussion about teacher pay, we tend to overlook a different issue: the growing pay gap between teacher in small districts and those in larger districts. A state law sets a minimum teacher salary for Iowa, which has minimized the starting salary gap somewhat. As an example, I compared the salaries in the 20 smallest districts in the state to those in 20 largest districts. While I understand that is an extreme comparison (since many of the smallest districts have fewer than 200 students and only offer a K-6 program), it will illustrate the gaps.

Based upon salary data from the Iowa Department of Education and the Iowa Public Employment Relations Board, the average starting salary in the smallest 20 districts in 2020-21 was $37,909.25. Only four of those schools had starting salaries higher than $40,000.

That differential is even more pronounced when you look at the maximum salaries in those same groups. The smallest 20 districts had an average maximum pay of $58,407.60. The average maximum pay in the 20 largest districts was $96,301.85. That’s a difference of a whopping $37,894.25 per year and represents a 64.9 percent larger amount. This gives large districts a tremendous advantage when it comes to attracting and retaining the most experienced and educated teachers.

Several factors play into this huge difference in maximum pay. First, virtually all of the larger districts have a long history of collective bargaining and advocacy. During the 43 years Iowa's successful collective bargaining law was in effect, a history was established of paying people based on experience and educational attainment. Many of the larger districts have specific pay lanes for teachers with EdD and PhD degrees, something that is virtually never provided in small, rural districts.

In addition, many of the larger districts also compete with urban and suburban neighbors for teachers, so offering competitive, top-end salaries helps them secure the most qualified teachers from smaller, rural districts. Some of the smaller districts have either never been involved in collective bargaining or have a very limited history with bargaining.

While increasing teacher salaries won’t be sufficient to keep large numbers of educators from leaving the profession, it would be a good start. If Republican-controlled states like Mississippi and Alabama can commit significant funds to increasing teacher pay, then there should be enough public support for a similar initiative in Iowa.

Unfortunately, the current Iowa Republican leadership has no interest in supporting public school teachers. Reynolds and some lawmakers prefer to bash public schools and use the state budget surplus for tax cuts for retirees and the wealthy. Any successful push to increase teacher pay statewide will require a grassroots effort to pressure lawmakers.

Top photo: "teacher's pay based on experience" by quite peculiar is licensed under CC BY-NC-ND 2.0.