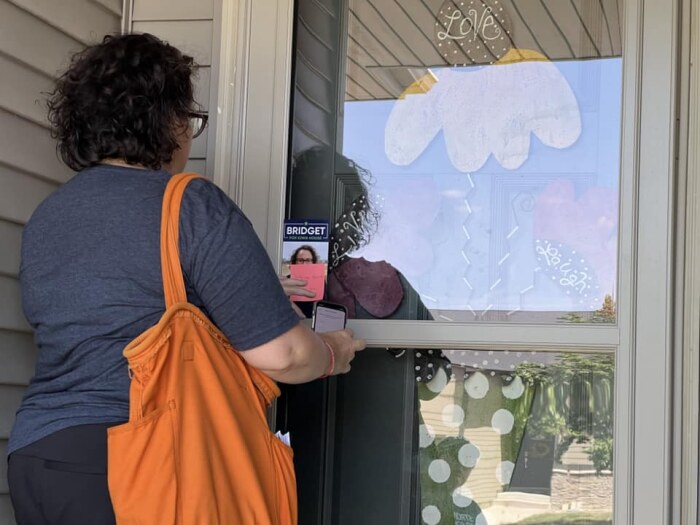 I hate door knocking. I’m not an extrovert; bothering people in their homes isn’t my thing. But our democracy is dear to me and I know I need to do everything I can to preserve it.

So Sunday afternoon, door knock I did. My list consisted of 26 Democratic doors (households) with 39 voters. No one answered at fifteen of those doors, so I left Democratic campaign literature and my flyer describing ways to vote and offering my help. I’ll follow up with texts where I have a number.

I asked those with whom I did speak what their most important issue was for November. The plurality answer was some form of abortion/Roe/women’s rights.

A couple of people said it wasn’t any one thing, “there’s so much.” A few started by volunteering “it’s not the economy,” or we’re all in these economic conditions together. One woman offered, “I want them to figure things out, stop fighting, and don’t let him back in.” Another suggested we needed an “economy that works for everyone.”

One guy announced that he was not going vote. “The system is broken.  Voting won’t help.” I told him I hoped he’d reconsider.

Five people plan to vote in person on election day; four are not sure yet when and how they will vote, and one couple have already sent in their absentee ballot requests. They’re going to personally deliver their ballots this year; last election one of their ballots was “lost.”

At one house, I asked to speak with Kathleen, who was on my list. The person answering the door, who looked to be Kathleen’s husband, indicated that Kathleen was home, but then asked why I was asking. When I told him I was volunteering with the Democrats, he abruptly said “no thanks” and shut the door. How many times does that happen?

At another home, the person on my list turned out to be a son away at college. By the look on her face, I’m not sure the packet of Democratic literature I left with his mother is going to reach him.

I hate door knocking, but I do it because it’s really important. Maybe you can too. Volunteer with your local Democrats.

Editor's note from Laura Belin: "Husband blocking" is a common experience for Democratic canvassers. Allison Engel wrote about the phenomenon in a Bleeding Heartland commentary from 2018. Local Democratic campaigns or organizations often have other volunteer opportunities (such as writing postcards or assembling packets) for those who cannot or prefer not to knock doors.