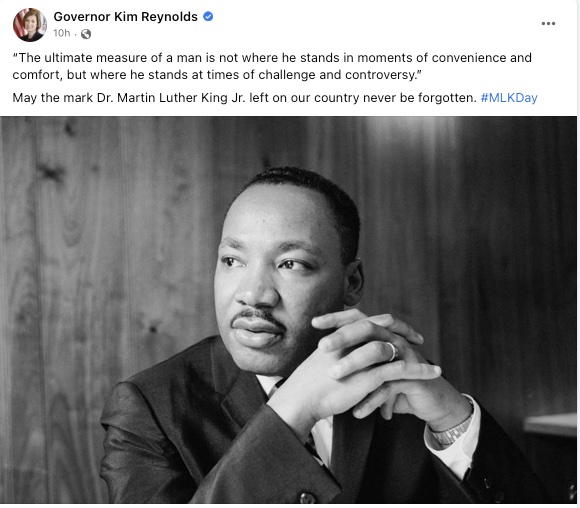 Where Kim Reynolds stood during "times of challenge and controversy"

"May the mark Dr. Martin Luther King Jr. left on our country never be forgotten," Governor Kim Reynolds posted on her Facebook and Twitter accounts on this year's national holiday to celebrate Dr. King's legacy.

It was a remarkable act of chutzpah for an official who has repeatedly amplified racist tropes for political gain, most recently last week.

Reynolds' social media posts cited one of the best-known passages from Dr. King's 1963 collection of sermons called Strength to Love: “The ultimate measure of a man is not where he stands in moments of convenience and comfort, but where he stands at times of challenge and controversy.” 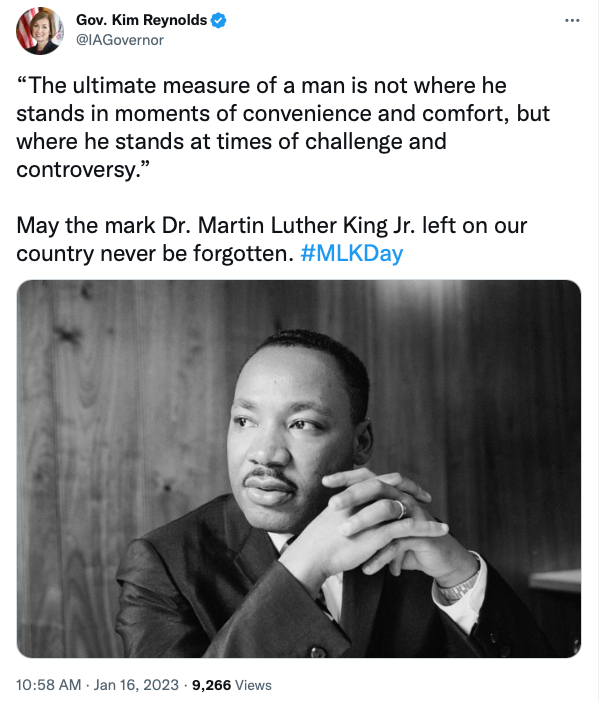 Iowa's governor doesn't measure up well by that standard.

Reynolds created a "FOCUS" Committee on Criminal Justice Reform in 2019. But she failed to enact most of the group's recommendations. In fact, neither the FOCUS Committee's final report nor the official announcement of its findings are available on the governor's website.

Reynolds claimed to support those policies, and included them in a wide-ranging policing bill she introduced in early 2021. But she didn't object when Republican lawmakers buried the bill's racial profiling provisions, while keeping enhanced penalties for protests and certain crimes, more legal protection for police who violate Iowans' constitutional rights, and other measures that would exacerbate racial disparities in Iowa's criminal justice system, according to a nonpartisan analysis.

Since signing that policing bill in June 2021, Reynolds has stopped pretending to have any interest in reducing racial profiling by Iowa law enforcement. Instead, she has repeatedly bragged that she will always "back the blue."

Also in June 2021, Reynolds signed a bill designed to restrict teaching and diversity training about systemic racism and sexism. In a news release about the bill, the governor appropriated Dr. King's famous words about the "content of their character" as she asserted, "Critical Race Theory is about labels and stereotypes, not education. It teaches kids that we should judge others based on race, gender or sexual identity, rather than the content of someone’s character."

Iowa Democratic Party chair Ross Wilburn commented that Reynolds had shown "the true content of her character": "She would rather pander to the prejudice within her own party, than further an important conversation about the very real institutionalized racism Black and Brown Iowans face every day."

In reality, critical race theory is a way of analyzing structural racism in legal, social, economic, and political institutions, not a call to judge individuals by their race or other identities.

And while academics developed that method years after Dr. King was assassinated, he certainly would not have wanted to suppress conversations at school or in the workplace about the systematic oppression of Black people throughout American history. Tyler Perry wrote in 2021 about the "misappropriating of Martin Luther King Jr." by conservatives who caricature Critical Race Theory.

As debates over Critical Race Theory overtook public discourse throughout the Summer of 2021, conservative commentators followed a familiar pattern of invoking a sanitized version of MLK’s legacy that relies upon a selective reading of his many public speeches. The tactic transforms King from a radical civil rights activist who criticized capitalism, US imperialism, income inequality, and white supremacy, into a harmless symbol who simply wanted Americans to transcend race and imagine that racial inequities are a problem of the past. [...]

King used race-conscious messaging to note how white Americans held an “oppressor status” that caused too many of them to carry an “ambivalence” toward Black America’s continuous pursuit of social justice (109). King directly addresses the critiques of white Americans who attempted to redirect attention from the Black struggle, noting that the descendants of enslaved people in the United States held a wholly unique history of oppression that distinguished their contemporary issues from those of Irish or Italian populations,  [...]

In similarity to many CRT scholars, King critiques complacent white people who benefit from structural racism while denying that they are themselves “racist” (126); he notes that America still has a “debt of justice” it must pay to its Black population (116); he advocated for a “guaranteed income” (271), and he asserted that such a wealthy nation holds a moral imperative to ensure all of its citizens have access to “a decent house, an adequate education and enough money to provide basic necessities for one’s family” (138).

During her 2022 re-election campaign, Reynolds spent more than $4 million on television commercials that reinforced negative stereotypes about Black people to mostly-white Iowa voters in every media market.

One spot accused her Democratic challenger Deidre DeJear (a Black woman) of not supporting the police.

Another used several phrases and visuals designed to evoke negative views of Black people (defunding the police, moving people "from work to welfare"), and featured footage of other Black women to generate negative associations with DeJear.

Reynolds' closing argument was a 60-second commercial celebrating images of whiteness as authentically Iowan. The script had the governor voicing this not-subtle dig: "Here in Iowa, we may get up early, but we're not woke." (Although "woke" originated as "Black vernacular," conservatives have transformed the term into "anti-Black pejorative.")

Reynolds could have won the election without pushing those buttons. She had the advantages of incumbency and outspent DeJear by more than ten to one, not to mention the benefit of Iowa's sharp rightward turn in recent elections. Nevertheless, she chose a divisive approach.

Unfortunately, the governor was at it again during last week's Condition of the State Address.

While making her case to increase state funding for crisis pregnancy centers, Reynolds told a story about Sarah Hurm, who decided against abortion (despite the wishes of the baby's father) and now volunteers to discourage women from terminating their own unplanned pregnancies. The governor then asked the audience to acknowledge Hurm and her four children. The camera lingered on Hurm, who is white, and her biracial children. As Rachelle Chase wrote in her Des Moines Register column, it could have been an inclusive moment, acknowledging Iowa's racial diversity.

And then the governor ruined it.

When the camera returned to her, she immediately said, “There’s one aspect of Sarah’s story I don’t want you to miss — the father of her son was not there to support her; in fact, he did the opposite. It’s impossible to overstate the importance of paternal involvement for mothers and children alike.”

Chase observed that Reynolds made sure viewers would understand the father of Hurm's children is Black, before using the moment to "reinforce the stereotype of irresponsible/absent Black fathers while celebrating the mother’s decision and the life of a young child."

This wasn't an off the cuff remark. It was choreographed and scripted in a document published hours before the governor delivered the address to Iowa lawmakers and a prime-time television audience.

The civil rights leader's daughter Bernice King tweeted on January 16, "Please stop using out of context quotes from my father to excuse not working to eradicate racism."

The sad fact is that for Iowa's governor, "not working to eradicate racism" would be a step up from her go-to strategy: using racism to score political points.