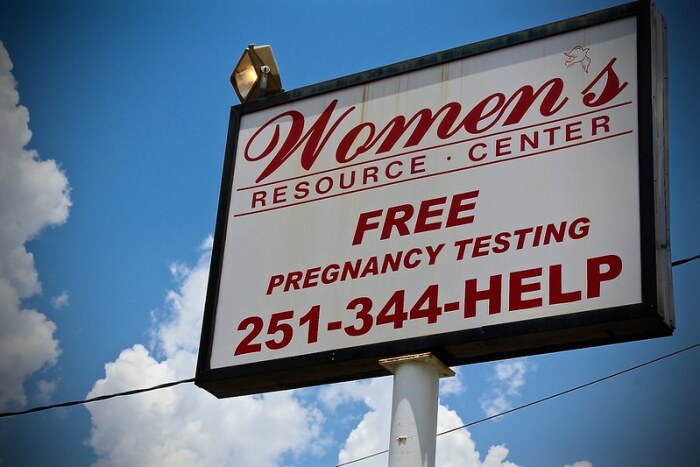 But the bill, negotiated by House and Senate Republicans and approved on party-line votes in both chambers May 23, does not extend postpartum coverage for Iowans on Medicaid, a documented way to reduce maternal mortality.

The budget bill, as amended on May 23, directs the Iowa Department of Human Services to create a "More Options for Maternal Support" (MOMS) program that will fund subcontractors providing "pregnancy support services." The subcontractors will not be allowed to provide any abortion referrals or counseling unless a physician "confirms the termination of pregnancy is medically necessary to prevent the pregnant woman’s death."

The MOMS program's enabling language is nearly identical to what Texas used to establish an "Alternatives to Abortion" program. Iowa DHS Director Kelly Garcia held a senior position in the Texas Health and Human Services Commission before coming to Iowa in 2019. The Texas program began with a $5 million budget in 2005 but received $100 million in state funding in the latest budget cycle.

Shannon Najmabadi and Carla Astudillo reported last year for the Texas Tribune that the program has operated with little oversight, and the state has collected little data to demonstrate its effectiveness. Texas still ranks among the worst states nationally for maternal mortality.

The type of organizations that would be eligible for Iowa's new MOMS program are often known as "crisis pregnancy centers" or "anti-abortion centers." The centers lure pregnant people with the promise of free services, sometimes using "deceptive tactics" to steer clients away from abortion.

Doctors Amy G. Bryant and Jonas J. Swartz wrote in the American Medical Association's Journal of Ethics in 2018 that these organizations

strive to give the impression that they are clinical centers, offering legitimate medical services and advice, yet they are exempt from regulatory, licensure, and credentialing oversight that apply to health care facilities. Because the religious ideology of these centers’ owners and employees takes priority over the health and well-being of the women seeking care at these centers, women do not receive comprehensive, accurate, evidence-based clinical information about all available options.

For instance, volunteers at the centers may wear white coats to create the appearance of being medical professionals. They typically offer free pregnancy tests and may offer "biased counseling in exchange for 'free' diapers, baby clothes and for dads, tools and sporting equipment." They may also claim to provide ultrasound services or prenatal care, but without trained medical staff.

The organizations may choose names similar to established clinics or set up shop nearby to confuse would-be patients.

The Iowa Maternal Mortality Review Committee found in 2020 that 56 percent of Iowa's maternal deaths "occurred postpartum" and recommended "expanding Medicaid coverage to cover women who had a birth covered by Medicaid for 1 year postpartum."

Iowa DHS communications staffer Alex Carfrae told Bleeding Heartland in February that agency Director Garcia was asked to review the bill and "provided feedback" to legislators but did not draft the language. He noted that expanding postpartum Medicaid coverage "supports Iowa’s Maternal Health Strategic Plan which calls for extended pregnancy-related coverage through Medicaid and private insurance."

After moving from the Senate Human Resources Committee to the Appropriations Committee, the bill was scaled back to $1 million for the MOMS program, still paired with twelve months of postpartum Medicaid coverage. The revised bill envisioned an appropriation of $5.6 million for the 2023 fiscal year (which begins July 1) and $8.9 million for fiscal year 2024 to fund the increased Medicaid coverage. However, federal funds would have covered a large share of the new postpartum Medicaid costs under provisions of the American Rescue Plan, which Congress approved and President Joe Biden signed last year.

When the chamber debated Senate File 2381 on April 5, Republican floor manager Mark Costello asserted that the program would not restrict abortion, but would give women the support they need to choose to have a baby.

Costello urged colleagues to oppose the Petersen amendment. He said one of the private insurance companies that manages Medicaid for Iowans will soon introduce a pilot program covering doula care for 60 recipients.

Speaking in favor of the amendment, Democratic State Senator Sarah Trone Garriott said she had benefited from having a doula while pregnant and wanted that service to be available to all Iowans, not just to those who can pay out of pocket.

Trone Garriott also highlighted the waste and fraud associated with the Texas Alternatives to Abortion program.

According to Trone Garriott, "The Texas Pregnancy Care Network provided to our committee no information on the impact or quality of services provided, no public health goals, no metrics or measures to show their progress toward any goal."

Upon digging deeper, Trone Garriott turned up "hundreds of reports" about subcontractors misusing the funds to support unrelated businesses or fund travel and perks rather than care for pregnant people. (This story for the American Independent links to some media coverage of fraud in the Texas program.)

The main problem was inadequate reimbursements to hospitals from the for-profit insurance companies known as "managed care organizations" for Iowa Medicaid. The trend hurts not only low-income people, but all pregnant Iowans who can't have babies in their home communities.

A pilot doula program for 60 Iowans wouldn't even cover 1 percent of the Medicaid population, Petersen said. "Now is not the time to start a new program that is not science-based." Instead, she argued, Iowa lawmakers should fund programs that work: twelve months of postpartum care and doulas for those "who would greatly benefit from having a champion by their side."

Senators rejected Petersen's amendment along party lines, then passed the bill by 32 votes to sixteen. Democrats Tony Bisignano and Kevin Kinney joined Republicans to support final passage. The bill was assigned to an Iowa House subcommittee, but went no further.

After weeks of limbo while top Republican lawmakers negotiated in private, the Iowa House and Senate returned last week to approve final versions of a dozen appropriations bills.

Costello presented the amended health and human services budget on May 23. It includes $500,000 for the MOMS program. But instead of extending postpartum Medicaid coverage, the bill instructs the DHS to report to the legislature by December 15, 2022 on "the number of [Medicaid] recipients of postpartum services, the services utilized, and the costs of such services for the period beginning January 1, 2020, through June 30, 2022, as well as information regarding the number of states that have expanded Medicaid postpartum coverage beyond 60 days."

Costello claimed during the Senate debate that he tried to get additional postpartum coverage into the bill, but House Republicans didn't agree to those terms.

Carfrae of the DHS did not provide Bleeding Heartland with any statement from the agency on this aspect of the human services budget.

Anne Discher, executive director of the think tank Common Good Iowa, blasted the decision in a May 27 email wrapping up the 2022 legislative session. (emphasis in original)

Extending the period for pregnant women to retain Medicaid coverage from 60 days to 12 months postpartum assures continuity of care as new parents recover from childbirth. It is an important way to reduce our deeply troubling rates of maternal mortality, especially among Black women. Because it helps new parents get care as they need it, instead of putting it off until there’s a major, and expensive, health emergency, it can help reduce health care costs.

Postpartum coverage expansion has already passed in other states, including red states like Florida, South Carolina, Tennessee and Louisiana. But instead of approving this humane, common-sense policy, Iowa lawmakers ordered a study of this already well-studied topic, requiring women to wait and hope for critical postpartum health care coverage next year.

Lawmakers who want to ban abortion sold this harmful program funding anti-abortion clinics to Iowans, saying they cared about new mothers. If they really wanted to help Iowa parents, they wouldn’t have stripped the original proposal’s expansion of postpartum Medicaid coverage which allows Iowans to access actual medical care from licensed providers.

Governor Kim Reynolds has not publicly commented on this proposal but enthusiastically supports anti-abortion policies, so will surely sign the corresponding part of the human services budget into law.

Final note: state lawmakers adjourned without passing a bill that would have made it more feasible for midwives to work in Iowa. The House approved that midwifery licensure bill with overwhelming bipartisan support, only to have the Senate State Government Committee eviscerate the legislation.