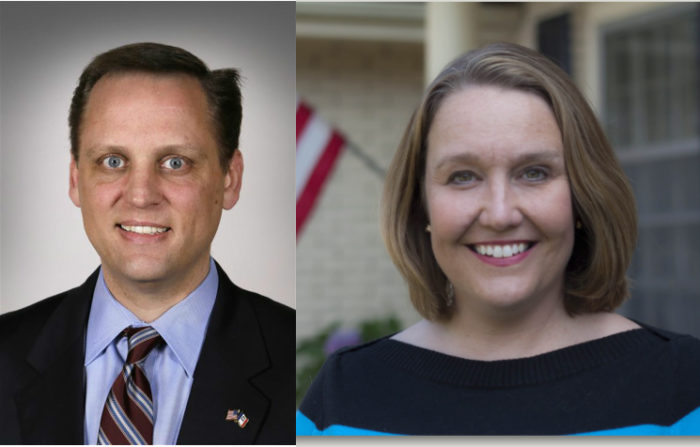 The Republican Party has spent more than $400,000 defending Iowa House Majority Leader Chris Hagenow’s seat in the Des Moines suburbs, which he held by only 23 votes in the last presidential election cycle. Most of the money has bought television commercials, beginning six weeks ago and continuing in heavy rotation to the end.

Hagenow led with a ludicrous spot portraying himself as some kind of champion for education funding and the preschool program he voted to eliminate. He moved to a deceptive hit piece against Democratic challenger Jennifer Konfrst, followed by an ad touting his role in making EpiPens more widely available for kids. A second negative spot was a narrowly-focused attack on a tax lien Konfrst resolved many years ago–the height of hypocrisy, since Republican leaders were simultaneously funding the campaign of a House candidate with a much larger, still unpaid federal tax liability. In the last few days, local television stations have been running Hagenow’s initial positive ad, which misrepresents his record on education funding.

House district 43 is trending away from Republicans.

Windsor Heights and other cities to the west of Des Moines were solid Republican territory for decades. But like older suburbs in many metropolitan areas, these neighborhoods have trended purple over the last 15 years. (I enclose a district map at the end of this post.)

Pat Rynard noted on November 1 that Konfrst’s lead of 1,087 early ballots was the largest for Democrats in any competitive Iowa House race.

I would guess that Konfrst has an advantage among the 1,268 no-party voters who have already cast ballots here, given what I’ve seen while knocking doors for her, as well as data from 2012 showing that Iowa Democrats identified and mobilized more early voters affiliated with neither party.

At least 40 percent of the votes will be in before election day.

Hagenow and his challenger received 17,461 votes altogether in 2012.

As of November 5, just under 7,000 voters in House district 43 had already returned ballots to the Polk County auditor. That number will likely grow by a few hundred as more mailed absentee ballots arrive, and some residents take advantage of the last opportunity to vote early in person on Monday, November 7.

Iowa Republicans typically have an edge with election-day voters, so Hagenow will make up some ground Tuesday. But if we assume 10,000 residents of House district 43 vote on November 8, Hagenow will have to win that group by a decisive margin (more than 55 percent to 45 percent) to make up for his deficit in votes already banked. And with so many Democratic ballots already returned, Konfrst’s phone-bankers and canvassers will have a smaller universe of potential supporters to contact during their final GOTV push.

Trump is less likely to have coattails here.

Iowa Republicans are crowing about polls showing Donald Trump in good shape to win this state’s six electoral votes. But here in the suburbs, Trump is not likely to be an asset to down-ballot GOP candidates.

Even in Iowa, polls show Clinton beats Trump among college-educated voters. Statewide, about 26.4 percent of Iowans at least 25 years old have a bachelor’s degree or higher level of education. That share is approximately 45 percent in Windsor Heights and above 50 percent in West Des Moines and Clive.

The latest Iowa polls show a very small lead for Clinton among women voters statewide, but I am convinced Trump’s numerous degrading comments about women, including “grab them by the pussy,” have hurt him badly in the suburbs.

The themes of Hagenow’s positive television commercials suggest Republican internal polling showed the incumbent has a problem with women voters. First, his wife and kids told viewers that Hagenow “made our schools stronger,” supporting extra funds for “new teachers and new books,” and preschool to help “kids get a head start.” This spot opened Hagenow’s tv campaign in late September and has become his closing statement over the last few days.

Hagenow spoke in his own voice for the ad that was on the air during mid-October, which seemed designed to appeal to moms. My transcript:

Hagenow’s voice: The EpiPen: for many, it’s the difference between life and death.

But the cost of two pens is now 600 dollars–a price increase of over 900 percent. That’s unacceptable.

View shifts to Hagenow, speaking to the camera: I’m Chris Hagenow. This issue isn’t Republican or Democrat. It affects all families. That’s why I helped pass legislation stocking EpiPens in schools, in sports facilities, and recreational camps, and called for an investigation of massive price increases.

No family should have to fear for their children’s safety.

And because of this, countless parents won’t have to.

Several Democratic lawmakers worked hard to secure funding for EpiPens in schools and other facilities. Although the “news” page at Hagenow’s campaign website includes a few press releases about EpiPens, the idea that the House majority leader was a force for change on this issue was news to many who spend time at the statehouse.

Konfrst has more airpower than Hagenow’s challenger did in 2012.

Hagenow’s misleading attack ad on Susan Judkins went unanswered during the late states of the 2012 campaign. The Iowa Democratic Party paid for some direct mail supporting Judkins and attacking Hagenow, but not for television or radio advertising that top-tier candidates enjoyed. Even a small radio buy with a positive message might have gotten her the two dozen votes she needed to overtake Hagenow.

House district 43 is a leading Democratic target now, and in the last days of October a Konfrst ad finally appeared on local tv:

Konfrst’s voice: Aren’t you sick and tired of politics these days? [viewer sees three television sets: Donald Trump is on the left screen, Chris Hagenow is on the right screen, and a “CHRIS HAGENOW ATTACK AD” is in the middle]

View shifts to Konfrst, standing in front of children in a yard: I’m Jennifer Konfrst. I’m a working mom who’s fed up with politicians. Hit it, kids. [Kids start spraying the tv sets with water guns]

Instead of talking about his own record, my opponent Chris Hagenow is attacking me. [viewer sees tv sets getting sprayed with water, one showing Hagenow, then shot of kids holding water guns]

Konfrst speaks to the camera: These kind of false personal attacks are exactly why people are frustrated with politics. [near bottom of screen: Jennifer Konfrst for State Representative]

Konfrst’s voice: I’m running for the Iowa House because politicians have gutted our mental health system and failed to properly fund our schools. [footage of Konfrst talking with voters; words near bottom of screen Jennifer Konfrst Invest in Mental Health Care and Jennifer Konfrst Fully Fund Our Schools]

Konfrst speaking to camera again, kids in the background: I’ll put politics aside to do what’s right for Iowans.

Isn’t it time we start attacking our problems and not each other?

In an ideal world, that commercial would have started running a month ago, but better late than never. It’s a great response that covers a lot of ground in 30 seconds. No wonder Hagenow switched back to a positive message within days of the Konfrst spot going up.

Late last week, Iowa Democrats launched a second video, focusing on Hagenow’s lack of support for legislation that would make medical cannabis accessible to Iowans suffering from more severe illnesses. To my knowledge, “Hagenow’s Broken Promise” is running online only, not on television:

Voice of Robert Lewis: When I tried medical cannabis, it was the first time in 42 years that I had been pain-free. [Footage of Lewis, words on screen ROBERT LEWIS LIVES WITH DEBILITATING PAIN, then Lewis speaks directly to camera, identified as Robert Lewis of Windsor Heights, Iowa]

It literally changed my life. [after Lewis speaks to camera, words on screen BUT MEDICAL CANNABIS ISN’T LEGALLY AVAILABLE IN IOWA]

Representative Chris Hagenow looked me in the eye and told me that he would help. [footage of Lewis walking, box near right of screen shows Hagenow’s photo and words REPRESENTATIVE CHRIS HAGENOW TOLD ME HE WOULD HELP]

Like many Republican lawmakers, Hagenow has told constituents he supports medical cannabis, but actions speak louder than words. The Iowa Senate approved a bill in 2015 that would have expanded the number of severe or life-threatening conditions allowing Iowans to obtain cannabis derivatives. Behind the scenes, Republicans watered down that bill before it cleared one committee. After the legislation died in another committee, House leaders blocked repeated Democratic efforts to bring real medical cannabis reform up for a vote. As the number two Republican in the lower chamber, Hagenow controls what bills reach the House floor.

Social media make it possible for a message like this to reach many voters at a lower cost than tv ads.

Bottom line: despite getting outspent on tv ads by roughly a three to one margin, Konfrst has grounds to be optimistic going into election day.

I don’t know what will happen on Tuesday, but if I were Hagenow, I’d be very worried.