Dr. Christopher Peters announced today that he will visit all 24 counties in Iowa's second Congressional district next week "to speak with Iowans about his plans for the 2018 election." Since I've never heard of someone holding more than two dozen events to publicize a decision not to run for office, it's a safe bet the Coralville surgeon will be launching his second attempt to defeat Democratic Representative Dave Loebsack.

As last year's GOP nominee in IA-02, Peters won 46.2 percent of the vote, a bit below Donald Trump's 49.1 percent in the district's counties. Trump's showing represented a huge swing in southeast Iowa, where 55.8 percent of the presidential votes in the IA-02 counties went for President Barack Obama in 2012.

“I have continued travelling the 2nd District since last November and I’ve seen that Iowans are as frustrated as ever with their federal government. Neither the Democrats nor the Republicans in Washington D.C. have put forth practical ideas to address our most pressing issues. The people I’ve met want an independent-minded representative in Congress,” Dr. Peters said.

During the 2016 election, Dr. Peters earned 46 percent of the vote, including the majority of votes in 15 counties. By comparison, Republican challengers to Congressman Dave Loebsack in 2012 and 2008 earned just 43 percent and 40 percent.

Peters spent only $208,818 on last year's campaign after entering the race relatively late. National Republican groups invested few resources in defeating Loebsack, compared to the three previous election cycles. Republican Party of Iowa Chair Jeff Kaufmann has said he wants to target IA-02 in 2018 and hopes to recruit a "unique...non-establishment" candidate for the race.

Whether the National Republican Congressional Committee will spend serious money here depends on how the political landscape is shaping up a year from now. Democrats currently enjoy a national generic ballot lead that could put dozens of GOP-held U.S. House seats at risk. Congressional committees in both parties typically spend more to protect incumbents than to support challengers in districts long held by the other party. Loebsack has represented IA-02 since 2007.

The latest Federal Election Commission filing for Peters shows $5,647.86 cash on hand at the end of the second quarter, with $110,200.00 in debts, all loans from the candidate to his own campaign.

The IA-02 counties contain 167,087 active registered Democrats, 146,418 Republicans, and 180,659 no-party voters, according to the latest figures from the Iowa Secretary of State’s office.

Several Republican state lawmakers, including Representative Bobby Kaufmann (Jeff Kaufmann's son) and State Senators Roby Smith and Mark Lofgren, have been rumored to be considering a campaign in IA-02. I would be surprised if any of them took the plunge. Same goes for State Senator Mark Chelgren, who announced plans to challenge Loebsack in 2015 but backed out of the race shortly before the filing deadline.

Since I published this post last month, some readers have speculated that Davenport native Michael Bousselot, former chief of staff to Governor Terry Branstad, is still planning to move into the second district and run against Loebsack next year. Doing so would indicate that either Bousselot couldn't handle the managing director position Summit Agricultural Group created specially for him, or that the Summit Ag job was more like a gift from Bruce Rastetter, allowing Bousselot to earn a full-time salary while he planned the next phase in his political career. 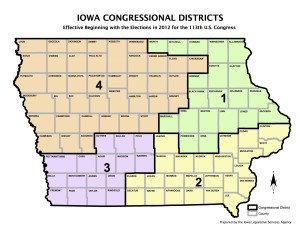