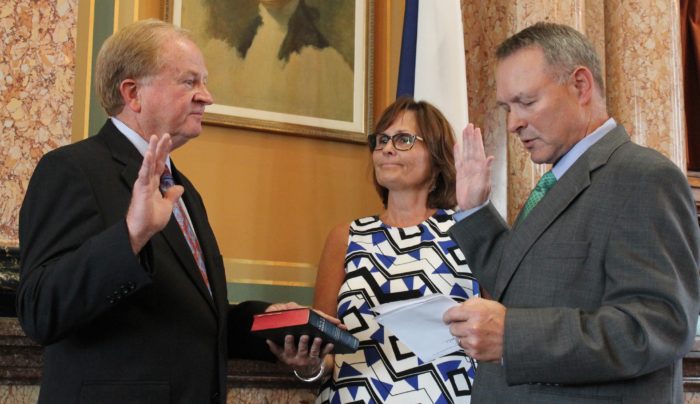 What's going to happen with Miller's veterinary practice, where he has worked for more than four decades? The business employs about 20 people, including three doctors. Starting in January, Miller will be "a full-time legislator," in Des Moines during the week and meeting with constituents in Davis, Jefferson, and Van Buren counties on weekends. When the legislature is not in session, he plans to keep working as a veterinarian, probably on a part-time basis.

As for his previous public service, Miller resigned as president of the Fairfield school board last week. "I'm going to miss it, because there were just a lot of great educators, professionals, and board members that really thought of public education as the bedrock of our society. And we all know that in rural communities, education is the key to sustainability and growth."

How would Miller describe the impact on Fairfield schools, as increases in state aid to K-12 districts have been low by historical standards since 2011? "I've been on the [school] board for four years, and every year we've had to make cuts in the general fund, and every year those cuts have been larger," from about $300,000 to $500,000 to $900,000 in the last academic year.

That's not fun, and that's not good for small communities. And it makes you wonder why, when our state is doing so well--in some years, state revenues have been increasing by 3 to 4 to almost 5 percent--that school systems are only getting maybe 2 percent [allowable growth] or less. So public education needs to be prioritized. And we need to take care of our children before we take care of real large, profitable companies.

Miller was alluding to the incentives package of $20 million from the state and $194 million from Waukee to the Apple corporation, which will build two data centers. Earlier on August 24, government officials had disclosed the terms of that arrangement.

Aside from education, what is Miller excited to work on at the statehouse? As a veterinarian, he has worked with people of all political persuasions and many business owners, so he hopes to help forge consensus on a range of issues. At the top of his list:

We need to figure out how we can get medical care affordable for someone that has a full-time job. They should be able to afford medical insurance.

We need to make sure that workers are able to have benefits. The collective bargaining that was lost last spring to the teachers and public employees, that had been in place since the 1970s. And that just wasn't fair, what happened, and it created a lot of fear. And I think we need to re-look at that. That's just not a good situation.

And then the other thing: about our environment. I think we need to work together and ensure that we all have clean water to drink and clean air to breathe. And I think here in our state, where we have one of the best ag schools in the world [at Iowa State University], and one of the great public health colleges at the University of Iowa, we could put [ISU] extension services to work to come up with some good solutions on how to clean up our water and clean up our air.

Miller's friend Curt Hanson, who represented House district 82 until his passing this summer, was a strong voice for natural resources within the Democratic caucus.

I asked Miller about the latest news on cutbacks to oversight of Iowa nursing homes. "We have a lot of long-term care facilities" in the three counties he now represents, so Miller is worried about eliminating on-site visits by staff for the Office of Long-Term Care Ombudsman. "I just can't understand how we could be so short of money, and then at the same time, I think the headline said, large incentives for Apple" to build in Waukee. "I think that's great, but I think there should be a little bit of money there, that could have gone to the ombudsman to take care of our long-term care facilities."

Referring to generous deals designed to promote business investment, Miller added, "If we can do any of that, we should be able to take care of the things that we're supposed to take care of."

At a press event yesterday, Governor Kim Reynolds defended the costly arrangement with Apple, saying tax credits from the state are not like writing a check to a corporation. But giveaways from the Iowa Economic Development Authority substantially reduce future revenues to the state's general fund and don't produce enough new tax collections to pay back the original subsidy, as economist Dave Swenson has explained many times, most recently here. The much-desired data centers "provide so-so pay to a comparative handful of mid-tech workers," but once up and running, "have very lean connections to the rest of Iowa’s economy," Swenson wrote in a guest post for this blog last year.

Final note: the successful GOTV effort in House district 82 was a recurring topic of conversation among the dozens of Democrats at last night's reception celebrating Miller's win. A large contingent of volunteers helped Miller go into election day with a lead of at least 1,000 early votes, and high turnout in the candidate's home county more than overcame the Republican advantage elsewhere.

Superstar volunteer Mike Weinard of Iowa City, who knocked hundreds of doors for Miller this summer, made an important observation in an August 9 Facebook post (shared with permission):

Some folks are pointing out that the Iowa Democrats' big win in the HD82 special election yesterday was under the "old rules" and that in 2018 the early voting period will be reduced to 29 days.

It's worth noting that for the HD82 special, early voting was in essence only 11 days--all three county auditors began mailing out absentee ballots on Thu. July 27. Fri. July 28 was the first day voters had their ballots arrive in their mailbox, and was also the first day of in-person voting in auditors' offices.

For more on the Republican changes to early voting in Iowa, see this explainer by John Deeth. His speculation seems on target: "Why 29? I think it’s because Day 29 is a Monday which gives Democrats two fewer weekends to call those voters and in staffer-speak 'chase' their ballots."