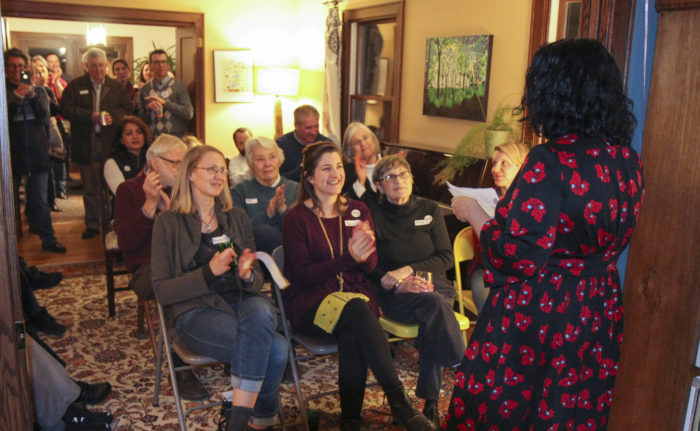 A view from the trenches by Christine Lewers, an organizer of a new group working to help Democratic candidates win Republican-held Iowa House districts. -promoted by desmoinesdem

Most Iowans don’t know who David Reid is. I didn’t either, until last spring, when the national Sister District Project sent an e-mail asking me to contribute to his campaign. I sent $20 and forgot about Reid until November 7, 2017, when Democrats in Virginia won fifteen Republican-held seats in the Virginia House of Delegates. Reid’s win was among them.

That got me wondering. Why not do the same thing in Iowa? The Sister District idea is to move resources from safe blue regions of the country to places where it can have the most impact: state legislative races where a Democratic challenger is taking on an incumbent in a flippable district.

Unfortunately, Iowa is not currently a focus of Sister District’s 2018 political strategy. That shouldn’t stop Iowa’s Democrats from building a similar strategy to help win back the state House themselves. I’m part of a politically active group of friends, neighbors and family that during the past year has marched and protested and called and more. None of that is enough. Democrats must win elections.

That’s why my group and I started Flip It Iowa.

Flip It Iowa is a grassroots effort to flip Republican state House seats in the 2018 elections. Our strategy – patterned after the Sister District Project – is to engage Iowa Democrats in solidly blue districts to support out-of-district candidates in flippable districts across the state. It’s a person-to-person, team-based effort to get more people involved in state politics, with the goal of flipping the Iowa House of Representatives blue.

My neighborhood group was the first Flip It Iowa team, only we didn’t know it at the time. In December, we put on a fundraiser in Iowa City for Eric Gjerde. Eric is taking on Republican Ashley Hinson in House district 67, which makes up the northern part of Cedar Rapids, Hiawatha, Robins and part of Marion. Eric won’t be my state representative when he wins, but he will be an ally to my local Democratic representatives and will stand with them to protect public education and access to healthcare, and bring reason back to the state’s fiscal policy.

Fifty people attended our house party, and the in-person and online contributions totaled about $3,000. Now we are supporting other groups of people forming Flip It teams and partnering them with candidates who can win in November and who need money now. $3,000 might not seem like a lot. We can never outraise the Republican campaign fundraising machine. But it was enough to help Eric reach a fundraising benchmark for January 1. Early money matters.

Those checks Eric took with him from my house were small — $25, $50, $100 — and the effort that went into collecting them was big. Each member of our group called everyone he or she knew, told them about Eric and asked upfront for money. Along the way we engaged more people in state politics, and since then more have gone to form their own Flip It teams.

As for me, I’ve learned about my state and the regular people in it who are brave enough to run for office because they are compelled to change what is going on in Des Moines. To name just a few:

Until recently, I’d never heard of them. They won’t represent me directly. That doesn’t matter. I have a strong interest in knowing who they are and an obligation to help them win.