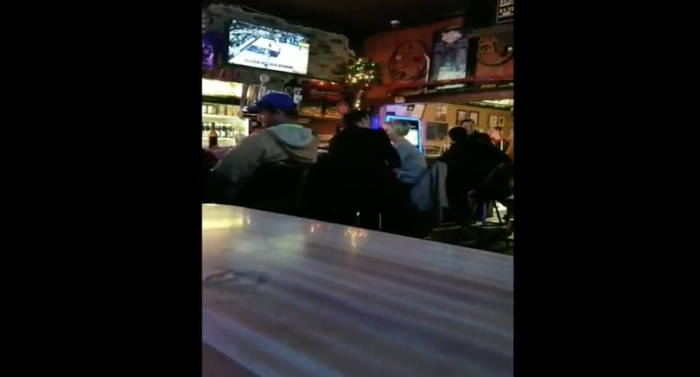 Bill Dix was never as smart as he thought he was

Senate Majority Leader Bill Dix's eighteen-year legislative career ended today after Iowa Starting Line published a video and photographs showing Dix and a lobbyist snuggling in a Des Moines bar on March 1. The majority leader did not comment on the alleged relationship in any statement to the media or in his resignation letter.

State lawmakers having affairs with lobbyists is hardly a new phenomenon, but given the potential for abuse of power, as well as the massive media coverage of the sexual harassment problem in the Iowa Senate GOP caucus, you'd think Dix would avoid having such an intimate conversation in public.

Then again, Dix allowed former caucus communications director Kirsten Anderson to be fired in 2013 on the same day she had submitted documentation of a hostile work environment. Although he repeatedly claimed Anderson lost her job due to poor writing skills, Dix didn't insist on quality output from staff who later held the same position for the caucus.

The majority leader didn't respond appropriately last summer, after a Polk County jury found Anderson faced harassment, discrimination, and retaliation. He seemed clueless and tone-deaf throughout a November news conference, when he said he would not release internal findings about sexual harassment and made several statements later shown to be false. He brought on former Senate President Mary Kramer as a volunteer adviser, instead of someone with more recent human resources experience. Kramer herself had failed to craft system-wide policies and procedures to improve the workplace environment when she was the second-ranking Senate Republican.

For a guy who carries himself with a lot of self-confidence, Dix handled sexual harassment concerns incompetently from his earliest months as the then minority leader to the outing that prompted his resignation. Attorney Katie Ervin Carlson told Iowa Starting Line, "Someone who was afraid of the consequences of their behavior would not be doing something like that in public. That suggests to me that we’ve failed the people of Iowa in terms of fixing the problem so far."

The woman with Dix appears to be the government affairs manager for the Iowa League of Cities. Looking through her list of lobbyist declarations for the 2018 session, I didn't see any red flags. The League of Cities registered as "undecided" on some of the most controversial legislation to clear the upper chamber so far, such as a tax cut plan that would bankrupt the state and an energy bill written for the benefit of investor-owned utility companies. Still, any personal involvement between a lobbyist and a top lawmaker creates the possibility of undue influence or pressure to trade sexual favors for a desired outcome on bills.

Senate Republicans will elect a new leader on March 14. Senate President Jack Whitver said in a statement that Dix, who is married with children, had made "the right decision" for himself, his constituents, and his family. Governor Kim Reynolds likewise said the majority leader "made the right decision in stepping down," because "Iowans hold their elected officials to a high standard, and as elected officials, we have an obligation to lead.”

Dix's resignation leaves Iowa Senate district 25 open. State law requires Reynolds to order a special election "at the earliest practical time, giving at least eighteen days’ notice of the special election," to fill a vacancy that arises while the legislature is in session. Lawmakers are expected to adjourn for the year sometime in April.

Since Dix would have been up for re-election this year anyway, some other GOP candidate will need to file nominating papers for the seat by this Friday, March 16, in order to appear on the June 5 primary ballot. Tracy Freese has already filed as the Democratic candidate for the primary and confirmed today that she will run in the special election. Senate district 25 contains nearly twice as many registered Republicans as Democrats and covers Hardin and Grundy counties, along with parts of Butler and Story counties (map).

P.S.- Although Pat Rynard edited the Iowa Starting Line video to protect his source's anonymity, Waveland Tap regular Tom Criswell outed himself as the filmer in an interview with the Des Moines Register's Lee Rood on March 12.

“With Senator Dix’s resignation, Republican Senators have an opportunity to finally get it right and change a culture at the Iowa Capitol that puts lobbyists, special interests, and political arrogance ahead of the interests of Iowa families.

“It is shameful that the only person fired in this whole scandal was the victim. No Republican Senators or staff was punished for their wrongdoing in this case. And many staffers have reported that they are still afraid to report harassment at the Capitol.

“There is a reckoning in our country on the issue of harassment in the workplace. The new Senate Republican leader should be someone who will hold Republican Senators and staff accountable for their actions in the Kirsten Anderson case and take steps immediately to address this issue.”

SECOND UPDATE: Former State Representative Annette Sweeney is considering a run for Senate district 25, the Des Moines Register's William Petroski tweeted on March 13. Sweeney chaired the Iowa House Agriculture Committee in 2011 and 2012. After redistricting threw her and fellow GOP incumbent Pat Grassley into the same territory, she lost a hard-fought GOP primary for House district 50. In November 2017, Sweeney accepted a Trump administration appointment to serve as state director for the U.S. Department of Agriculture's Rural Development. Rejoining the legislature would involve a huge pay cut; on the other hand, the Iowa Senate is a full-time job for only about four months each year.