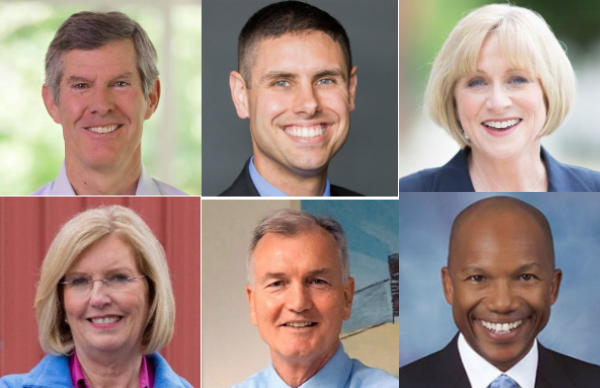 Des Moines Register poll: Bad news for Hubbell, worse news for everyone else

After spending millions of dollars more than his closest competitor, Fred Hubbell leads the Democratic field of gubernatorial contenders, the latest Selzer poll for the Des Moines Register and Mediacom finds. But Hubbell hasn't locked up the race: this snapshot suggests his support is below the 35 percent level needed to win the June 5 primary outright, and three-quarters of respondents said they are open to changing their minds.

While other candidates have an opportunity to gain ground, they likely lack the capacity to reach as many Iowans as Hubbell will during the home stretch. And no one is in a position to make a case against the front-runner that large numbers of voters will see.

Aside from a few weeks during the holiday season, Hubbell has been advertising on television almost continuously since last October. He had already spent more than $1.8 million before the end of 2017, of which more than half a million dollars went toward tv ad production and buys.

The candidates haven't yet filed their latest financial disclosures, which are due on May 21 and will be available here. Pat Rynard calculated in mid-April that Hubbell's campaign had spent $2,280,000 on television alone; it's likely that figure will approach $3 million by primary election day. At this writing, fourteen different Hubbell spots have aired in the Des Moines and Cedar Rapids markets, which reach the majority of Iowa residents. The more recent ads have run in Sioux City and the Quad Cities as well, where no other Democratic candidate for governor has been on the air on broadcast channels. (A reader notes John Norris ads are in rotation on Davenport cable.) According to Bloomberg Politics reporter John McCormick, as of May 18 the Hubbell campaign had run 3,265 ads on broadcast stations in Des Moines, 2,557 ads in the Cedar Rapids market, 1,048 in Sioux City, and 976 in Davenport.

Boulton and Glasson ran television ads in Des Moines and Cedar Rapids for a few weeks in January and February and have sporadically been on the air since then. But after running a spot featuring Senator Pam Jochum in April, Boulton's campaign was off tv during the weeks before the Des Moines Register poll was in the field (May 13-15). The Building Trades union paid for a pro-Boulton commercial during part of that time, and AFSCME has funded an extensive online advertising campaign.

In addition to spending roughly three times as much on tv as the rest of the field combined, Hubbell has also sent more than a dozen direct-mail pieces to thousands of reliable Democratic voters, covering education, health care (especially mental health), Planned Parenthood funding, tax credits, and the state budget. Boulton, Glasson, Norris, and McGuire have each sent at least one mailing, but Hubbell's mail volume exceeds that of all other candidates put together.

Hubbell's lead is largest among respondents age 65 and over, who are more likely than younger voters to watch television news. Senior citizens cast nearly half the ballots in the 2016 Iowa Democratic primary and will almost certainly be the largest bloc of voters on June 5. Young Iowans are more engaged in this election than they were two years ago, thanks in large part to the Boulton and Glasson campaigns. But our state's electorate is still predominantly comprised of people over age 50.

With so many more respondents familiar with him, Hubbell should be running away with this race. So it's a red flag that Selzer found he has only 31 percent support and an 11 percent lead over Boulton. If no one wins at least 35 percent of the vote on June 5, a statewide convention will select the gubernatorial nominee on June 16. Thanks in large part to backing from organized labor, Boulton has the largest number of state convention delegates committed to support him. Glasson and Norris also have more fans in hard-core activist circles than does Hubbell.

Side note: a Remington Research Group poll for KBUR News radio in Burlington found Hubbell in a much stronger position, with 46 percent support among likely Democratic voters, compared to 20 percent for Boulton and 7 percent for Glasson. You can read full results here. Remington doesn't have much of a track record in Iowa, and I am inclined to trust Selzer's methodology more than a firm that sampled 2,315 respondents on May 5 and 6.

On the other hand, modeling the likely primary electorate is a challenge for even the best pollsters. Selzer's final poll before the 2010 Republican gubernatorial primary was way off, showing Terry Branstad nearly 30 points ahead of Bob Vander Plaats. The following week, Branstad won that primary by a little less than 10 points.

Even if Remington or Selzer missed the mark about Hubbell's margin, it's a safe bet he is leading the field for now. What would it take to keep him from winning the primary? Pfannenstiel reported,

Jennifer Duffy, a senior editor with the Cook Political Report who specializes in analyzing governor’s races, said she’s not surprised voters are still making up their minds because of the large field of candidates. And Hubbell’s outsize television presence likely is fueling his lead, she said.

"The interesting thing about this race is there has yet to be a negative ad," she said. "If somebody wants to displace Hubbell or try and keep Hubbell under 35 percent, they’ve got to start taking some shots at him."

No one's going to spend money on a negative spot when they can't afford statewide advertising to raise their own profile with a positive message. Even if money were no object, an attack ad is risky in a six-way field. The person who goes after Hubbell could drive voters to a different candidate.

Boulton, Norris, and Glasson criticized Hubbell during the May 16 debate on Iowa Public Television, citing tax credits he oversaw during the Culver administration and political donations to Republican State Representative Peter Cownie, whose parents are close Hubbell friends. The event was well-moderated and is worth your time. But the number of undecided or persuadable voters who watched is much smaller than the number who will see Hubbell's final ads during the coming two weeks.

The Des Moines Register and KCCI-TV will co-host the final Democratic gubernatorial debate on May 30--probably too late to change the dynamic of the campaign, barring some huge gaffe or revelation.

Any comments about the governor's race are welcome in this thread. Fun fact: Chris Woods, quoted in the Des Moines Register story as a Bernie Sanders supporter now backing Boulton, co-founded Bleeding Heartland along with Drew Miller in 2007.

P.S.--Boulton supporters including John Deeth are citing the Selzer poll as proof their preferred candidate is the only viable alternative to Hubbell. I am sticking with Norris, who in my view is most qualified to do the job and best positioned to compete with Governor Kim Reynolds outside major metro areas.

P.P.S.--When speaking to Third District Democratic convention delegates on April 28, Norris added a line I hadn't heard in his stump speech before: "I've been investigated by the White House Department of Personnel and two FBI background investigations for my two [U.S.] Senate confirmations. There are no surprises out there, folks." He didn't point the finger at any other contender that day, but during his May 17 interview with the Des Moines Register's editorial board, Norris drew contrasts between himself and Hubbell (starting around the 57:00 mark). After asserting that Hubbell is "quintessential Des Moines" and doesn't connect as well with rural Iowans or small business owners, Norris added,

Listen, I have went through two FBI and White House personnel investigations into my background before I got confirmed to the Senate twice. And no one else in this campaign has been vetted like I have. [...] There are some issues in Fred's background, I think, that Kim Reynolds will know about, that may become issues in this campaign, but we haven't had a chance to really have any vetting. But I think I'd tell people, listen, my whole life's been out there on public display, going through two Senate confirmations. There's no surprises.

Key Republicans like Reynolds adviser David Kochel and Iowa GOP chair Jeff Kaufmann have telegraphed a strategy of taking cheap shots at Hubbell for being wealthy. But for obvious reasons, they haven't indicated their planned lines of attack against the various challengers. Reynolds' campaign staff must have done opposition research on all the Democrats.