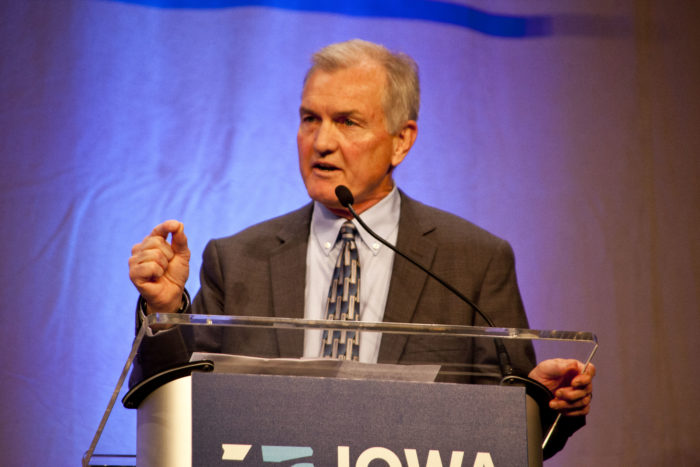 I've been undecided on the governor's race for the better part of a year. The six remaining Democrats--Nate Boulton, Cathy Glasson, Fred Hubbell, Andy McGuire, John Norris, and Ross Wilburn--agree on many core issues. All would invest more in education and other public services, reverse Medicaid privatization, restore collective bargaining rights, and stand up for reproductive rights and LGBTQ equality. All bring important life experiences to the table, as you can see from stump speeches Bleeding Heartland posted here, here, and here. Not only would I happily vote for any of them in November, I would knock doors for any of them this fall.

I didn't expect to commit to a candidate for governor until shortly before the June 5 primary. But as a Polk County convention delegate, part of my job today will be electing district and state delegates. If no gubernatorial candidate receives at least 35 percent of the vote in the primary, a state convention will select our nominee.

Here's why I believe John Norris should be that candidate.

We can't start turning things around in Iowa without winning the governor's race. Democrats have a chance to win back majorities in the state House or Senate, which would stop Republicans from enacting more destructive laws in 2019 and 2020. But we need more than that.

We need state agency leaders who are committed to improving services for vulnerable Iowans, instead of spectators who watch as their departments can't function and private insurance companies hurt Medicaid recipients and care providers.

That will require nominating a Democrat who can beat Governor Kim Reynolds. Norris is best positioned to do so, because:

He has the most relevant experience for this job.

As lieutenant governor, Reynolds shadowed Terry Branstad for more than six years. By this November, she will have been performing the governor's duties for almost a year and a half. I believe any of the Democratic candidates would be a much better governor than Reynolds, but our nominee will need to win over 550,000 to 600,000 Iowans, not just committed Democrats.

Norris ran the governor's office as the first chief of staff in Tom Vilsack's administration. He knows every aspect of the job. He has helped craft a state budget, choose agency leaders, develop energy and economic development policies. That knowledge is valuable in its own right, and having seen all the gubernatorial candidates in multiple settings, I don't think any of the others have the same depth of knowledge about as broad a range of issues.

Policy wonk Jon Neiderbach endorsed Norris after ending his own gubernatorial campaign, citing his "extraordinary government and political experience" and saying, "When you’re running, you get to see all the candidates up close a whole lot. And there’s no doubt in my mind that he has the experience, and disposition, and passion to do the things we need in Iowa." If voters can focus on a head-to-head race between Reynolds and Norris, I believe those qualities will come through.

The governor is in a relatively weak position for an incumbent. Polls indicate Iowans know things aren't going well on many fronts, and it's "time for someone new" in the governor's office. As Norris said at the Iowa Democratic Party's big fall fundraiser, "I know a little bit about cleaning up Branstad messes, and I’m ready to clean up this Branstad mess."

He can unite Democrats.

Norris was living overseas during the run-up to the 2016 caucuses, so he wasn't involved in divisive "Hillary or Bernie" fights. His high-profile endorsers include Democrats who preferred Sanders as well as some who worked or volunteered for Clinton.

Although many labor unions favor either Boulton or Glasson in the primary, Norris has good relationships with organized labor and is the second choice for many activists on that wing of the party. Through his work for Vilsack and for various candidates, including presidential candidates John Kerry and Barack Obama, Norris is highly regarded by many of Iowa's large Democratic donors, who helped Hubbell raise more than $3 million last year and McGuire more than $450,000.

He is best-placed to improve on Democratic performance outside major metro areas.

“If Democrats just keep doubling down on urban areas they should expect the same result,” Norris said. “I’m trying to build capacity in rural areas so we don’t fall into the same trap again. If you start here, you can come back here in the end and have some reservoir of good will.”

Since Todd Prichard left the governor's race, Norris has been the contender with the strongest ability to connect with voters outside the largest counties. He spent part of the 1980s organizing in rural Iowa and ran a small-town restaurant for four years. As a staffer for Vilsack in the governor's office and at the U.S. Department of Agriculture, Norris remained engaged with issues related to the farm sector.

All of the gubernatorial candidates have attended events around Iowa during the past year, but Norris has invested the most time in getting out to meet voters in towns of all sizes. I believe he would be a more credible challenger to Reynolds than candidates who have spent all of their adult lives in Des Moines or Iowa City.

Any comments about the governor's race are welcome in this thread. Bleeding Heartland will continue to publish guest commentaries advocating for any Democrat in a competitive primary for governor, Congress, or some other office. Please read these guidelines before writing, and fight fair in whatever venue you use to volunteer for your preferred candidate.