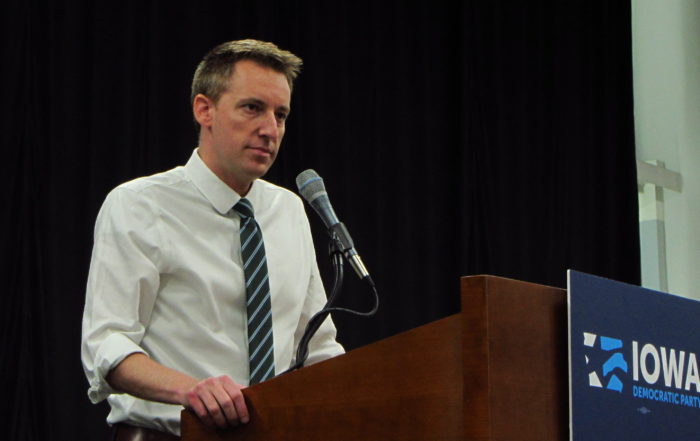 Jason Kander: If you come for our right to vote, we're coming for your job

The founder of Let America Vote was the only non-Iowan on the convention speaker's list. His remarks were a highlight of the morning proceedings, so I've enclosed below the audio clip and full transcript. Among the memorable lines: "let's send a message to every vote-suppressing politician in Iowa and across America that if you want to attack democracy, you've got to go through us. And if you want to come for our right to vote, we're coming for your job."

Kander has visited our state more than a dozen times in the last year and a half, raising awareness about voter suppression and headlining events for Democratic candidates or progressive organizations. Let America Vote's executive director Abe Rakov has been based in Des Moines since last fall.

After briefly praising the earlier candidate speeches and thanking Iowa Democratic Party leaders including state chair Troy Price, Kander got right to it. My transcript:

And also, you need to give Dave Loebsack a little backup. You gotta send [Congressional challengers] Cindy [Axne], and Abby [Finkenauer], and J.D. [Scholten] to Washington. [applause]

You know, every time you turn on the tv right now, what you hear is people speculating about a blue wave. Walk right here, people talking about a blue wave. Let me tell you something about a blue wave. A blue wave is not a weather event. You can't just sit around and wait on it. You can't turn on the tv and see the weatherman, you know, talking about, we've got a front of Democratic enthusiasm coming in, it's going to mix with, you know, progressive activism. No! That is not how a blue wave works. It is not a weather event. It is made by people. It is made because you get out and you knock on doors, and you make phone calls, and you do the work. Are you ready to build a blue wave? [applause]

The chairman [Price] mentioned that I used to be the secretary of state of Missouri. When I became secretary of state of Missouri, I learned the story of this fellow named Walthall Moore. I want to tell you about him. Walthall Moore was the first African American state representative in the history of my state. He was elected 97 years ago out of St. Louis. And he got to our state capital in Jefferson City, and he had an agenda. And number one on his agenda was, he was going to expand access to higher education for African Americans in our state.

And in his very first term, he got Lincoln University established. It's still there: it's HBCU [Historically Black Colleges and Universities]. And his colleagues were so impressed at this accomplishment that they promptly gerrymandered him right out of the state legislature, after one term.

But I'm telling you this story because that's not the end of the story. He went home, and he took a couple of years off, and then he picked out one of the districts of one of them good old boys who bounced him out of the legislature. And he moved into that district, and he ran, and he beat him. I like that story because Representative Moore, he created a political consequence for voter suppression. And that's what you need to do here in Iowa, that's what we need to do here and all across the country. [applause]

So, so about a year and a half ago, I started Let America Vote. And our mission is to create political consequences for voter suppression. In short, we believe that in 2018 in America, if you are an elected official and you are making it harder to vote, we should make it harder for you to get re-elected. [applause]

Because some people might say that things have changed since the days of Walthall Moore. But they haven't changed enough. Black elected officials are routinely redistricted out of their seats. Hispanic Americans are routinely pushed off the voter rolls simply because of their last name. Working people are confronted with bureaucracy that they can't confront all day while they're trying to work a job and keep a job, just in order to vote. People are trying to keep them away from the ballot box because of who they are going to vote for.

This fight should be over in America. We've already had this argument. American heroes walked across a bridge in Selma, facing down dogs and batons and hoses for the simple idea that we all count, and we all get to vote. And standing against them was un-American then and it is un-American now. [applause]

That's why Let America Vote chose Iowa as one of the states where we are going to work, and we will work alongside you to make sure that we create that political consequence for voter suppression, right here in your state.

And look, I volunteered to serve my country in the Army and in Afghanistan, because I wanted to stand up for the rights and the freedoms that this nation has to offer. And I'll be damned if I'm going to come home and watch [Iowa Secretary of State] Paul Pate and [Governor] Kim Reynolds and Donald Trump try and take those rights away. [applause]

Time and time again, the courts have said that these laws disproportionately impact minority voters. Let's be clear: that is a legalese, churched-up way to say that these laws are racist. That's what they are. [applause]

And this should all just be a history lesson. I wish that it was. I wish that this was just a history lesson. But it is not. Because white supremacists are literally on the march in this country, emboldened by a president who says that they are "very fine people." Call me crazy, but I believe we deserve a commander in chief, by the way, who has the courage to at least stand up to the KKK and Nazis. [applause] Just a minimum bar to jump over. Just gotta hop right over.

Iowa Democrats, the civil rights movement never ended. That means we're still a part of it. We get to be a part of it right here. Because if we allow people of color, young people, disabled people, low-income folks, working people and others to have their voice at the ballot box taken away, then this country's going to go backwards. It's going to go back in time. And that's what the Republicans want. But you know what? I'm not going back. And you're not going back. [applause]

I want to close by telling you a quick story. Of all the missions that I took part in when I was in Afghanistan, there's one that always stands out to me when I think about the meaning of public service and about the value of democracy. I worked with the Afghan National Army and others to escort a newly-elected member of the Afghan parliament from the capitol back to her home. The reason she needed protection--it wasn't that she had made some radical statement, or taken on some group that was hostile to her. No. The reason she needed protection from folks like us is because she was a woman serving in the Afghan parliament. She faced down a constant threat of death.

I think about her all the time. I think about her every time that somebody on cable news uses the term "political courage." I'd think about it whenever somebody told me in the state legislature or when I was secretary of state that something was a tough decision or a tough vote. Because I doubt that she, when a tough vote came along, was thinking about some lobbyist or some donor or somebody back in her district that was pushing her to do something. I think she thought about what was right.

I have seen with my own eyes a politician who didn't have to have political courage--who had to have real courage, true courage, just to get up every day and go to work. And it inspires me every single day, and it reminds me that our democracy is worth fighting for in this country. [applause] It is worth fighting for.

So starting right now, let's send a message to every vote-suppressing politician in Iowa and across America that if you want to attack democracy, you've got to go through us. And if you want to come for our right to vote, we're coming for your job. [applause]