Lessons of 2018: Both parties elected more women lawmakers than ever

Fourth in a series interpreting the results of Iowa’s 2018 state and federal elections.

The largest group of women ever to run for the Iowa legislature has produced the largest contingent of women lawmakers in state history.

For the first time, women will make up more than a third of Iowa House members and a majority of the lower chamber's Democratic caucus.

The number of women serving in the Iowa Senate will exceed the previous record set in 2013 and 2014. In a major shift from the recent past, the women senators will include almost as many Republicans as Democrats.

Two Democratic incumbents did not seek re-election. Helen Miller (House district 9) retired, and Abby Finkenauer (House district 99) ran successfully for the first Congressional district. The other seventeen all won another term on November 6:

At minimum, 24 members of the House Democratic caucus will be women. That number could rise to 25: in House district 55, Democratic challenger Kayla Koether trailed GOP Representative Michael Bergan by less than ten votes according to unofficial results.

The final number of House Democrats will probably be 46 or 47, assuming the Republican candidate's narrow lead holds in House district 82. Either way, women will outnumber men in the caucus.

The House GOP caucus will also include more women than ever before. Only six Republican women served in the chamber during the 2013-2014 and 2015-2016 sessions. After the last general election, that number rose to nine. In January, ten Republican women will be sworn in as state representatives.

Of the nine who have served in the state House during the past two years, two retired in 2018: Dawn Pettengill (House district 75) and Kristi Hager (House district 56). The other seven all were re-elected:

Three Republican women won their first elections to the legislature on November 6:

To sum up, 34 or 35 women will be sworn in when the Iowa House reconvenes in January. A net gain of six or seven seats in one year is remarkable, given that female representation increased by only four seats over the four previous election cycles.

Only the odd-numbered Iowa Senate seats were on the ballot this year. Three of the five women Democrats in the upper chamber will be up for re-election in 2020:

Of the other two Democratic incumbents, Amanda Ragan ran for re-election and narrowly won a fifth term in Senate district 27. Rita Hart left Senate district 49 open in order to run for lieutenant governor.

Although the Democratic caucus will shrink from 20 members to 18, the number of women moves up from five to six--a third of all Democratic senators.

Turning to the Republican side, Amy Sinclair (Senate district 14) was not up for re-election this year. Sweeney won a full term in Senate district 25.

Five women out of 32 Republicans may not sound like a lot, but remember: after the last election, Sinclair was the only woman in a 29-member caucus.

Eleven out of 50 senators is a long way from gender parity, but the numbers are moving in the right direction.

Final note: In other respects, the newly-elected Iowa legislature becomes slightly less diverse. The Senate remains all-white and lost its only LGBTQ member when Democrat Matt McCoy opted to run for Polk County supervisor instead of for re-election in 2018.

Only four African Americans will serve in the lower chamber (Democrats Ako Abdul-Samad, Ruth Ann Gaines, Ras Smith, and Phyllis Thede), down from five during the past eight years. In 2009 and 2010, six of the 100 representatives were African Americans.

Liz Bennett remains the only out LGBTQ member of the House. To my knowledge, Abdul-Samad (who is Muslim) is the only lawmaker in either chamber identifying with a religion other than Christianity.

Iowans have never elected a Latino to the state legislature, and the last Asian American to serve was Swati Dandekar, who left the Senate in 2011.

UPDATE: Adding maps that show where the various state House and Senate districts are located. 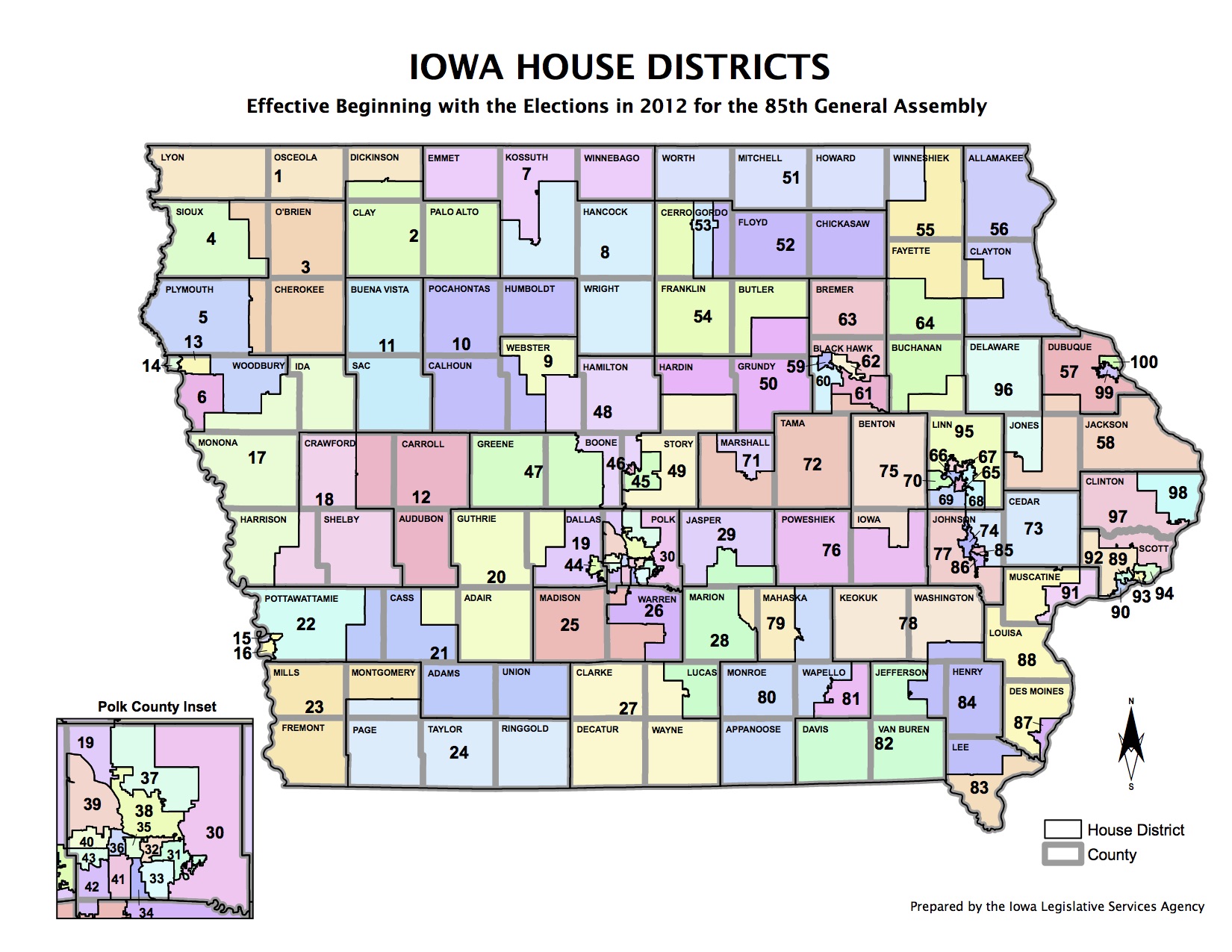 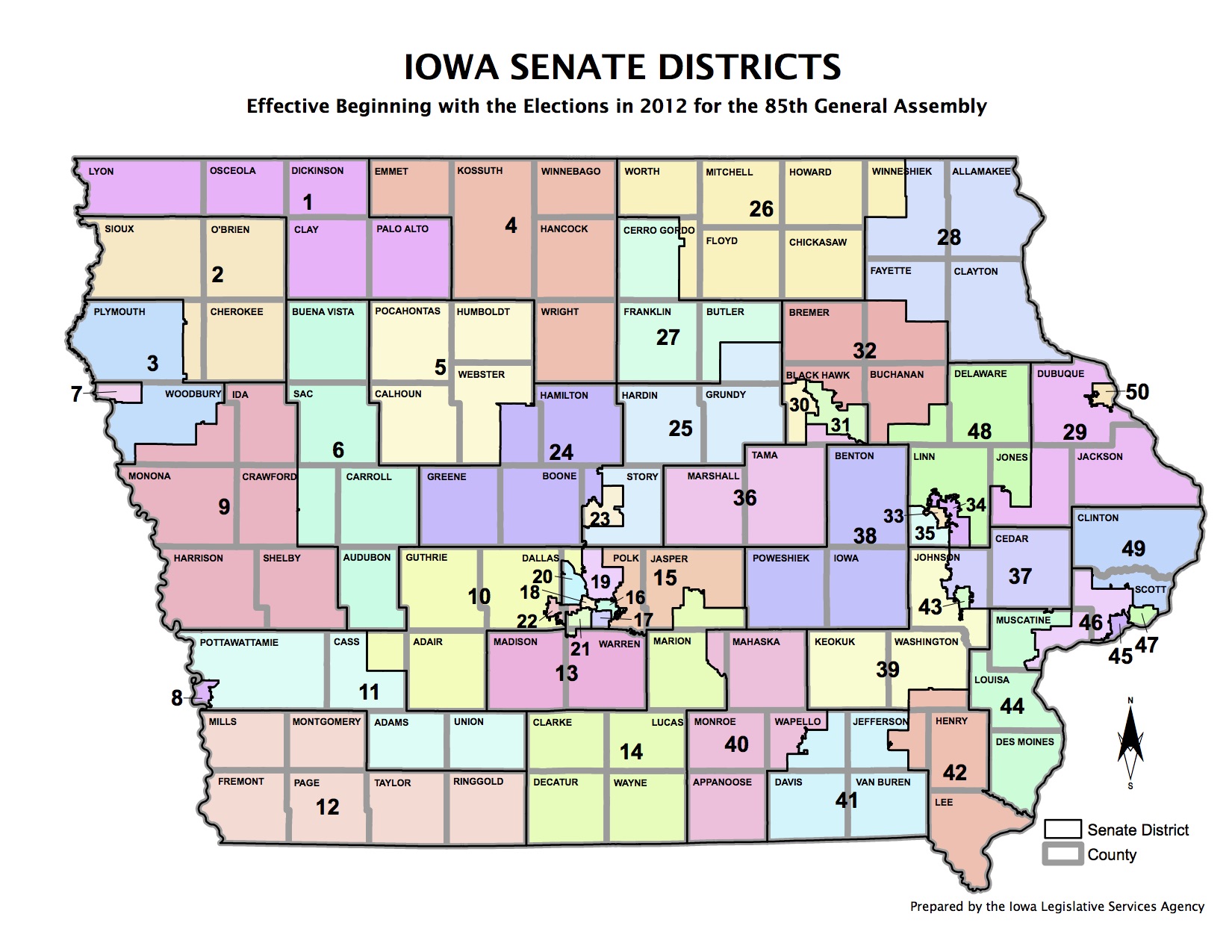