Over the past seven and a half years, I've mostly showcased native plants in Bleeding Heartland's wildflowers series, with an occasional nod to naturalized species and even some invasive plants.

The Illinois Wildflowers site says of this species,

Yarrow is a common plant that has naturalized in all counties of Illinois (see Distribution Map). The variety of Yarrow that occurs in Illinois is probably native to Eurasia, although there is a variety of this plant that is native to western North America. This latter variety tends to be smaller in size and its foliage is more heavily covered with woolly hairs. Habitats include mesic to dry prairies, pastures, fallow fields, grassy waste areas, and edges of paths, yards, or hedges. Disturbed areas are preferred; Yarrow persists in native habitats (e.g., prairies) to a limited extent. Yarrow is often cultivated in flower and herbal gardens, from where it occasionally escapes.

But the Minnesota Wildflowers site notes,

According to Flora of North America (FNA) this species is native, though morphologically variable. FNA goes on to explain that some early botanists considered the variations separate species, others considered them variations of a single species. It seems now this is a Northern Hemisphere species that has hybridized sufficiently between North American and introduced plants to become a single, variable species. While most references treat it as native to North America, the DNR is undecided about its status in MN.

Adding to the confusion, the U.S. Department of Agriculture lists this species (also known as common yarrow) as both native and introduced in most of the U.S. and Canada.

Whatever this plant is, a lot of it is thriving in the Dallas County prairie Mike Delaney has been restoring for the last couple of decades. I took all of the pictures below on his land.

The "feathery and fern-like" leaves make yarrow easy to distinguish from other prairie plants, even before the flowers appear in June. 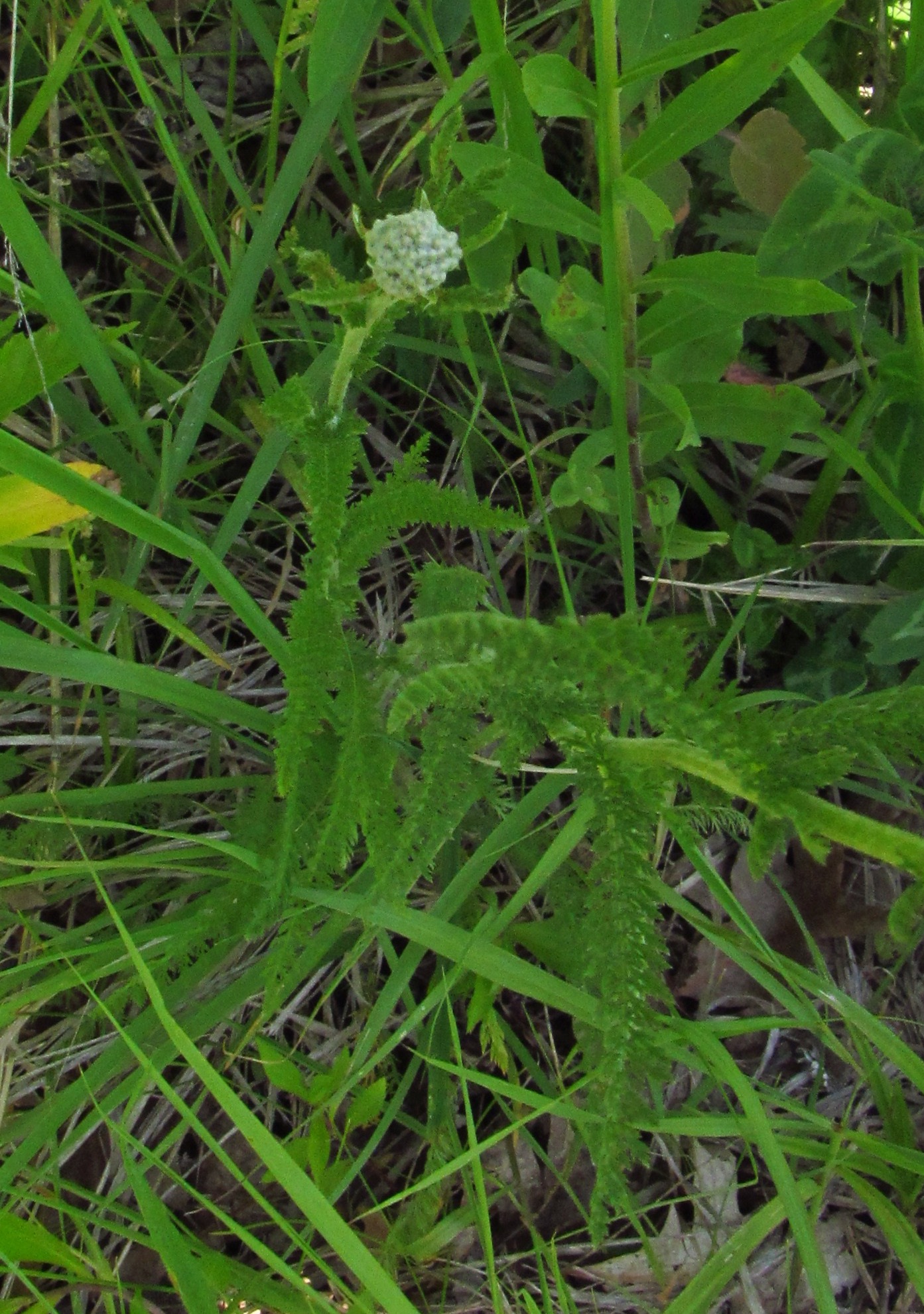 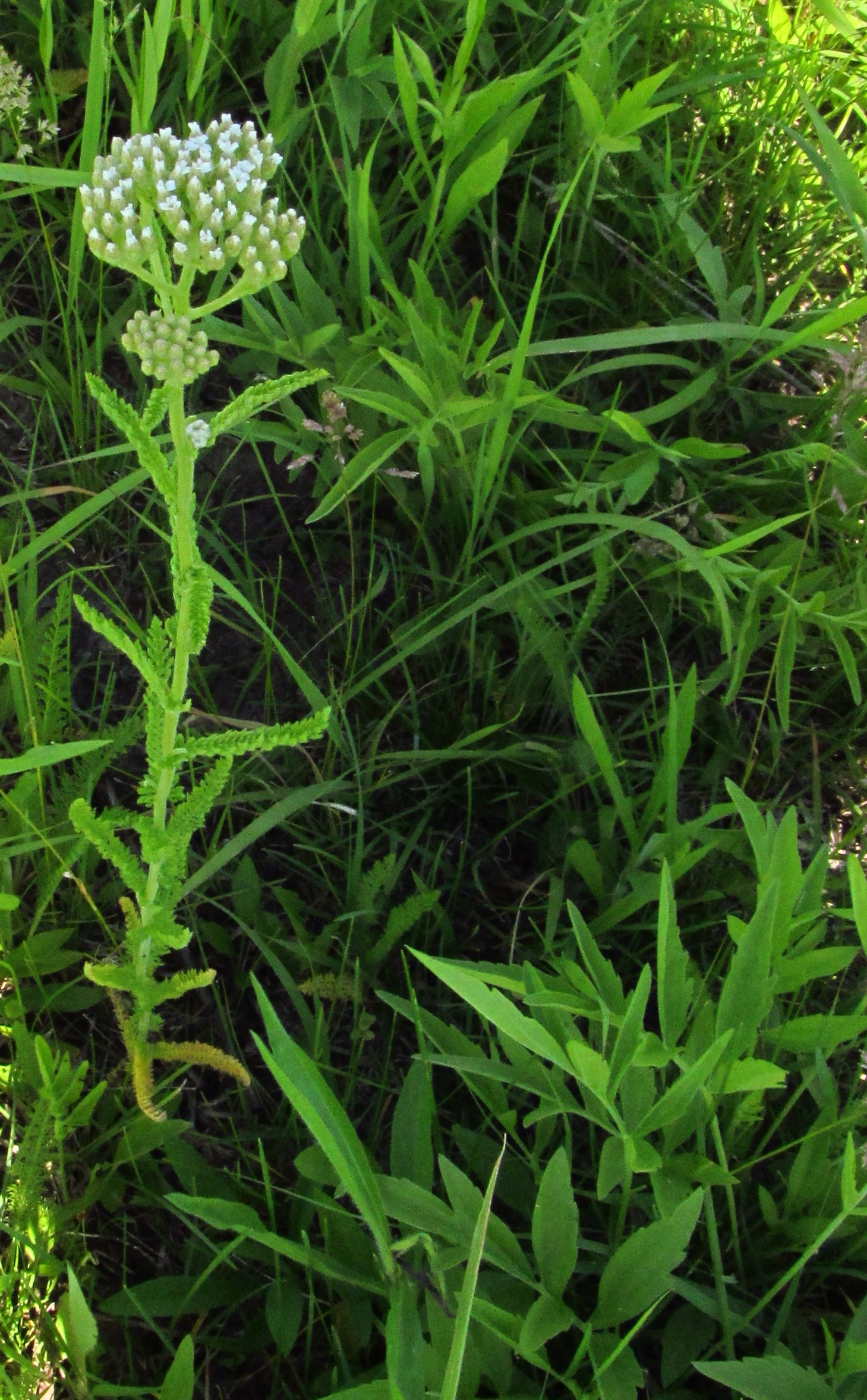 As with other members of the aster family, what looks like one flower is actually a flowerhead with four to six ray florets (which resemble petals) and a group of disk florets in the center. 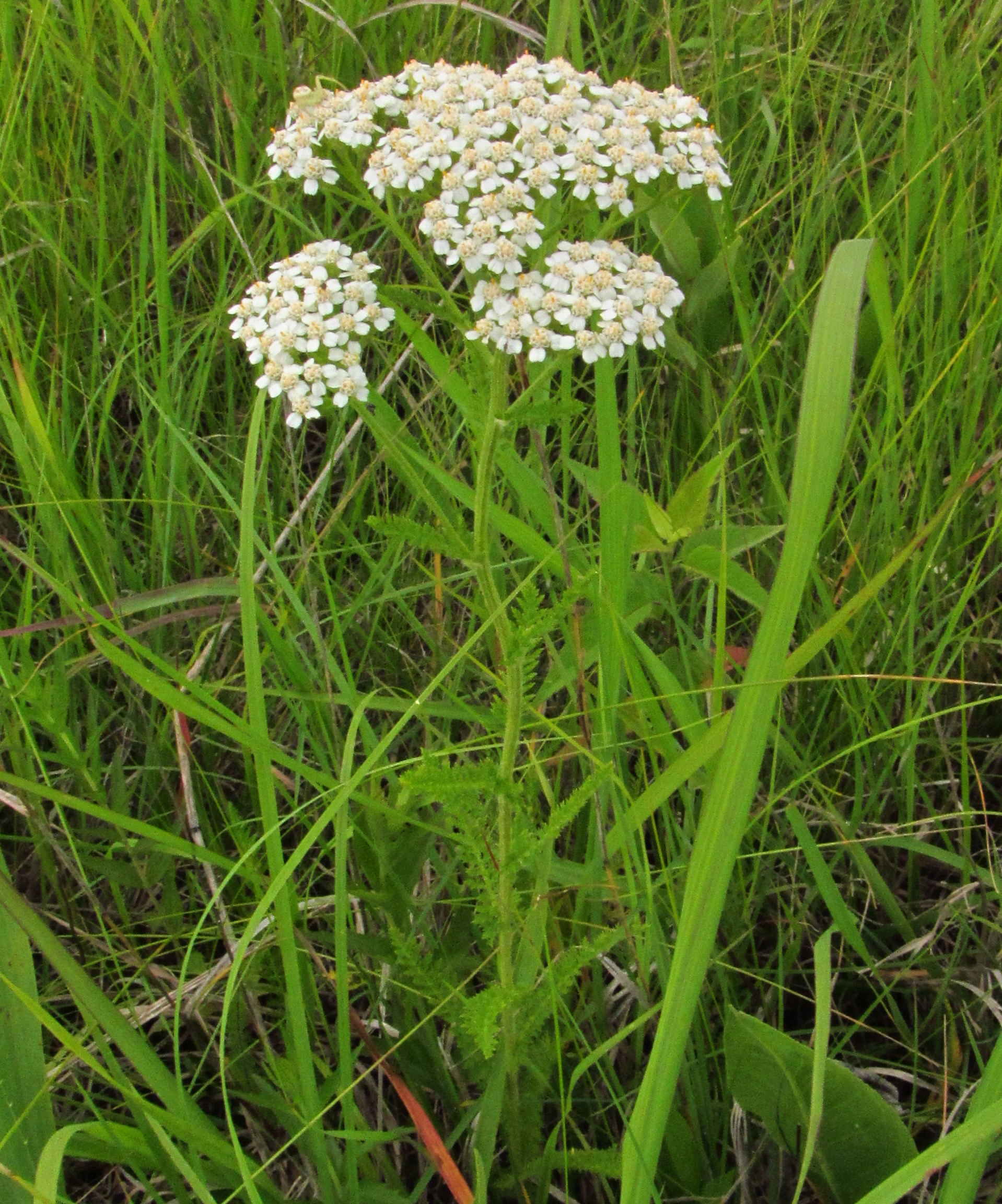 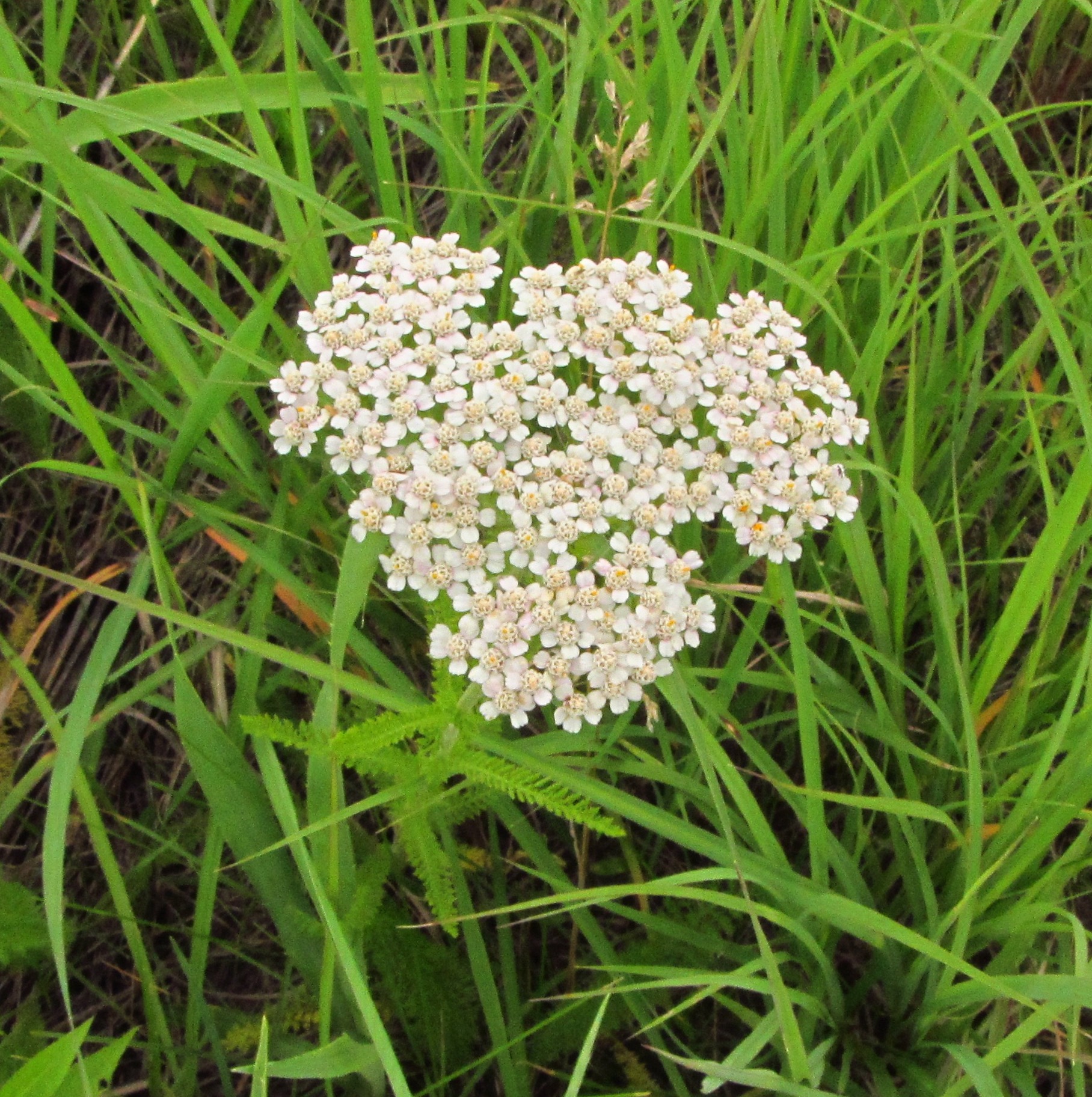 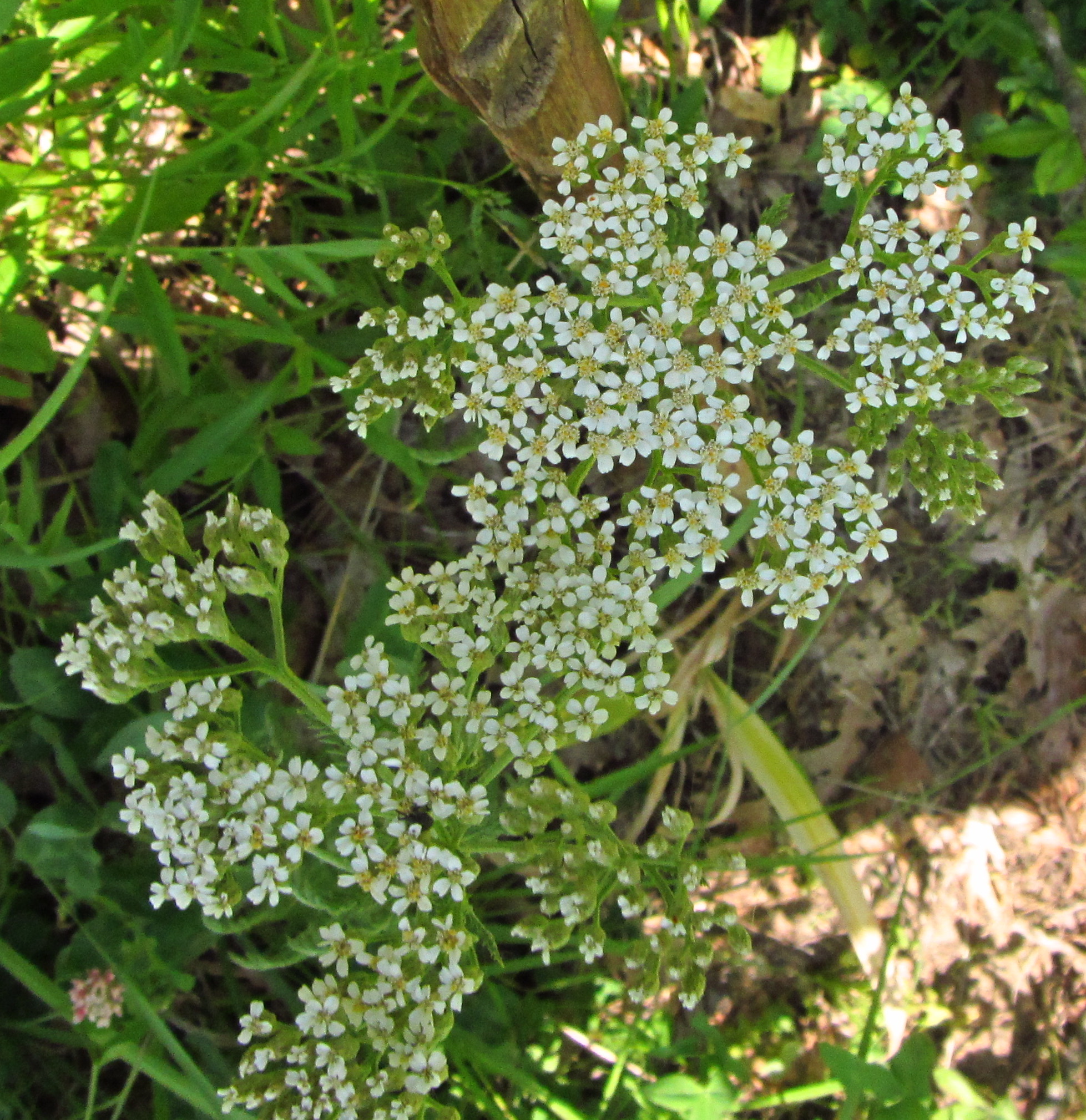 Since yarrow flowerheads aren't particularly "showy," I'm devoting the rest of this post to pictures of this plant with other prairie inhabitants. Prairie phlox was near the end of its blooming period when I visited Delaney's land in late June. 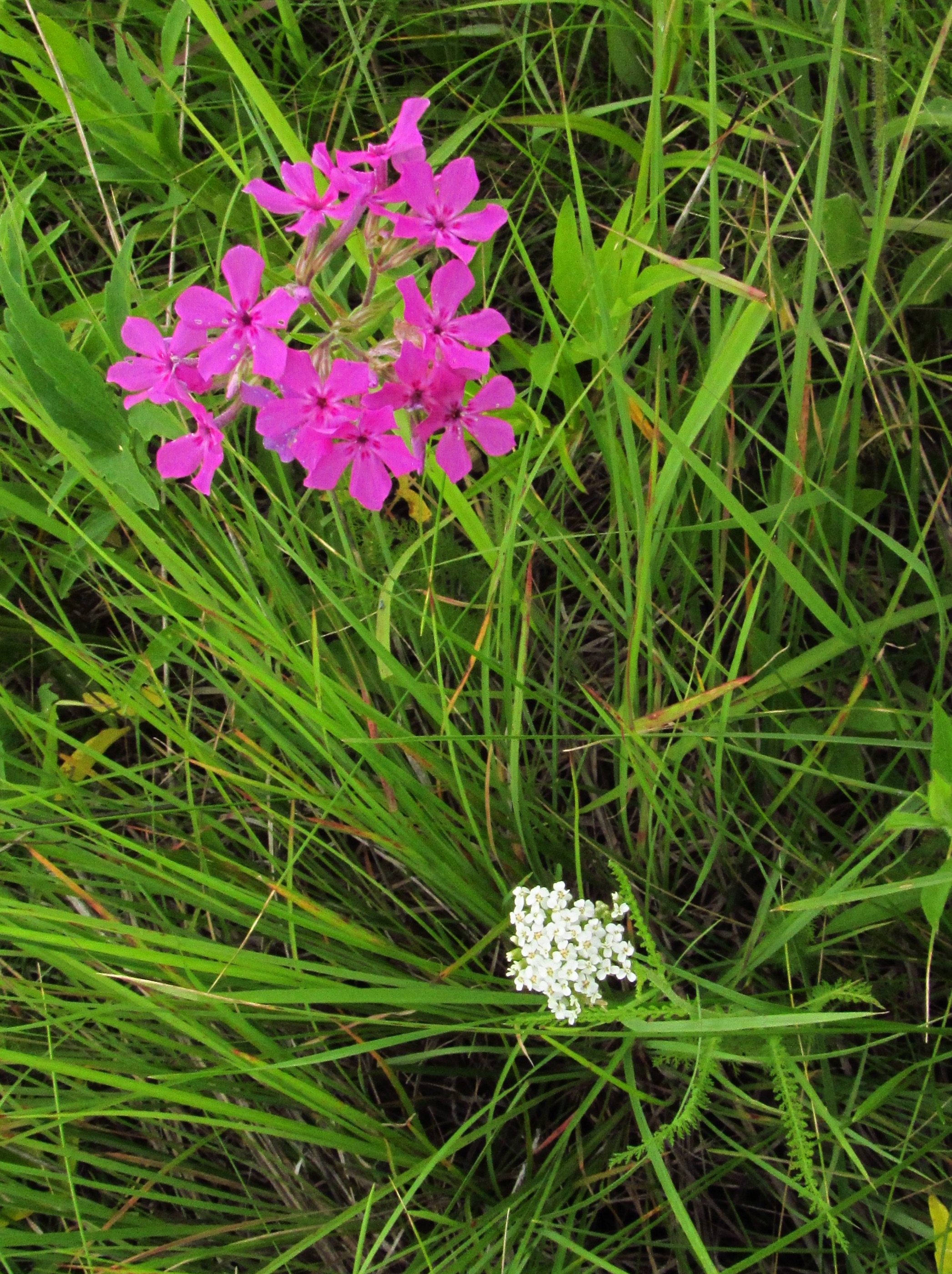 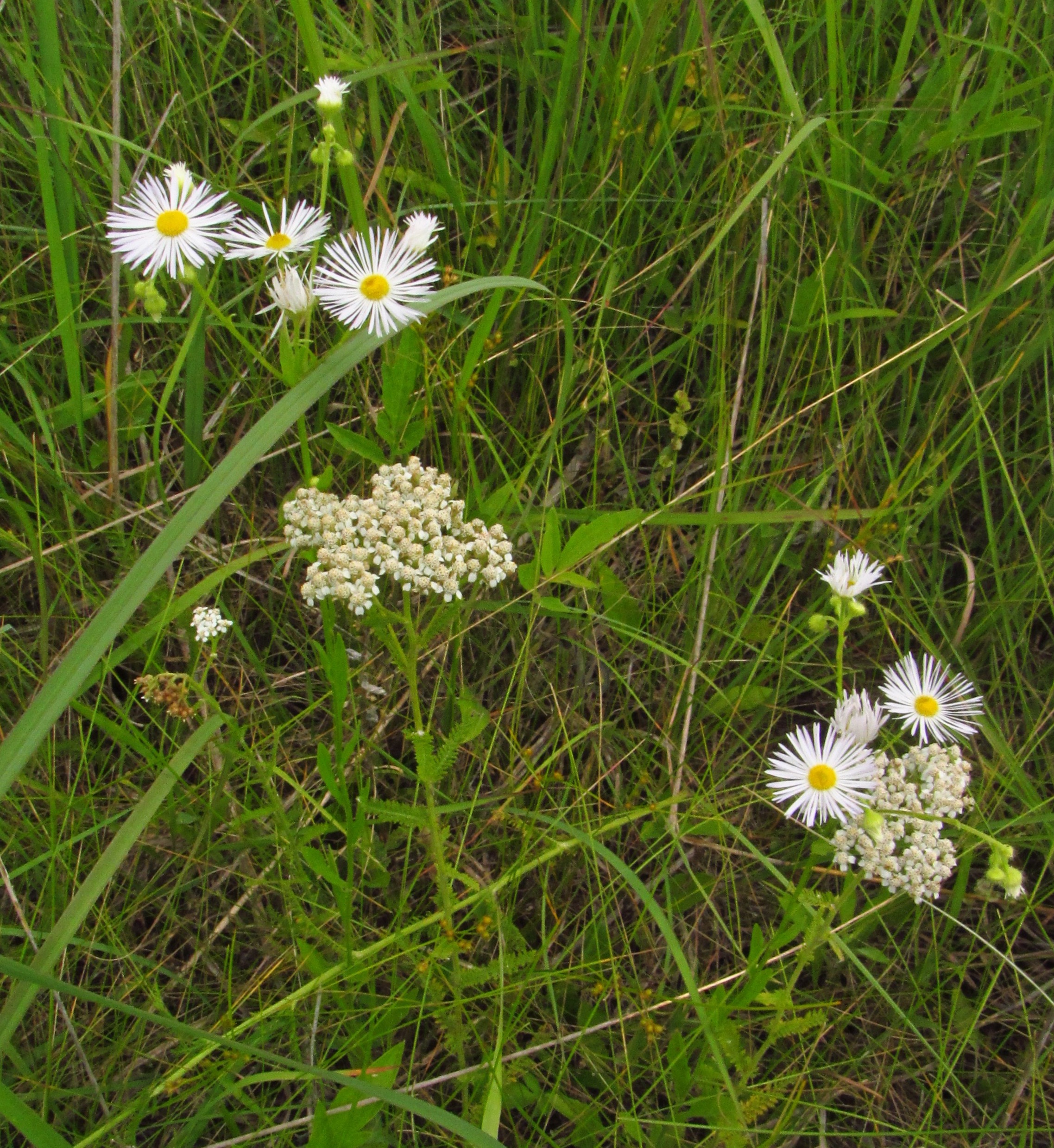 Black-eyed Susans were starting to open. 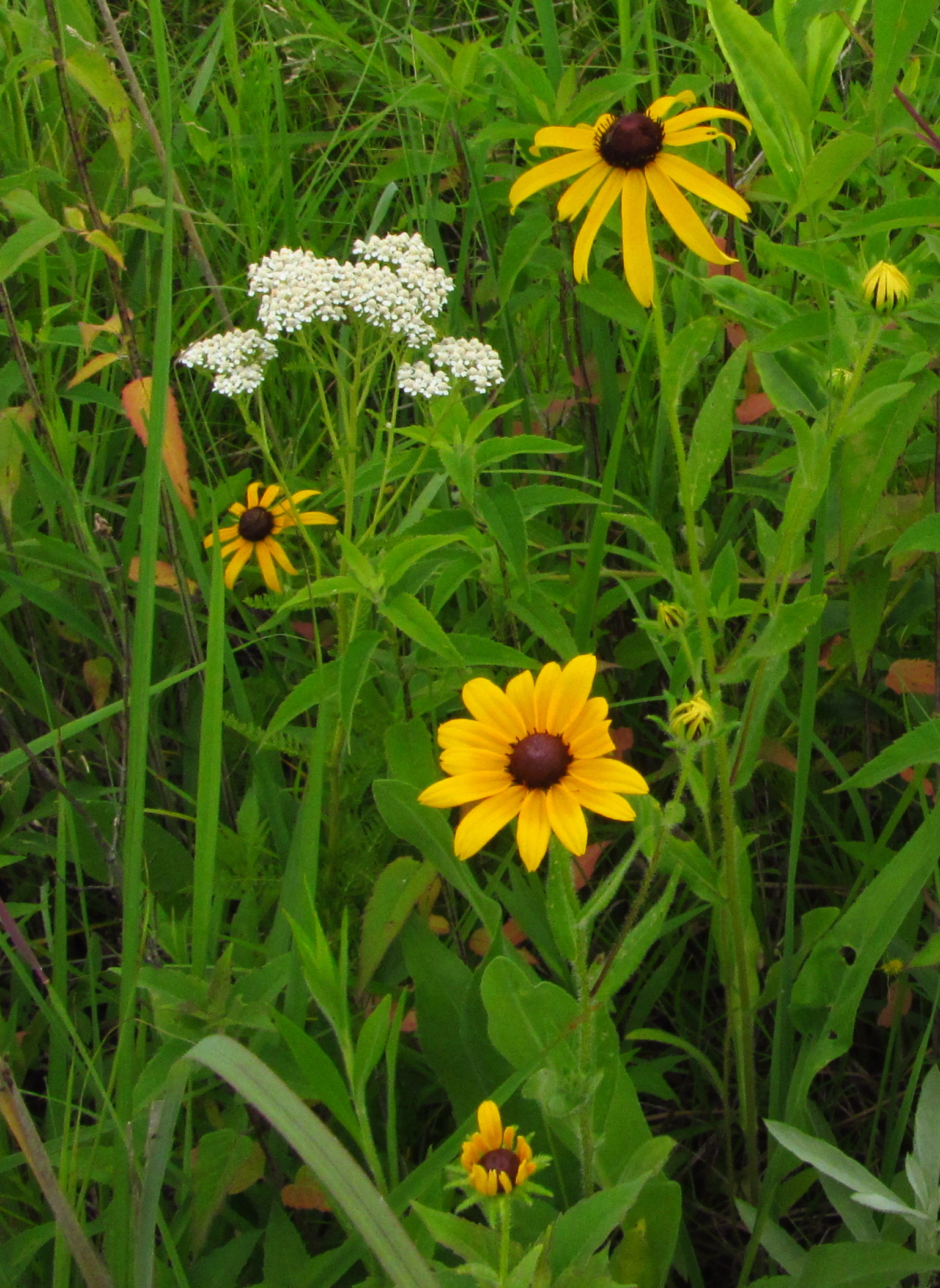 Along with purple prairie clover. 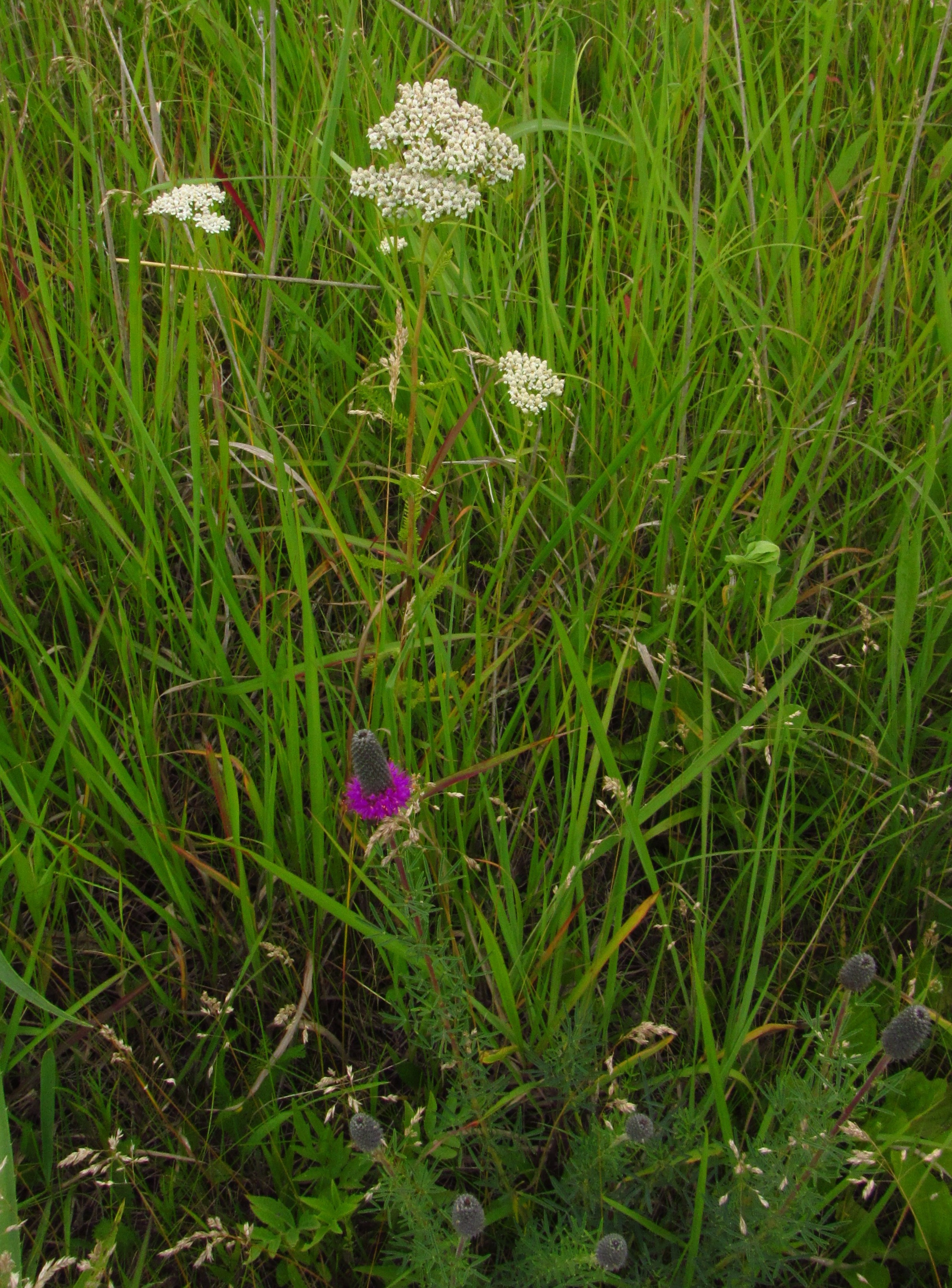 That's prairie phlox on the lower left, and pale purple coneflower starting to bloom in the upper right corner of the frame. 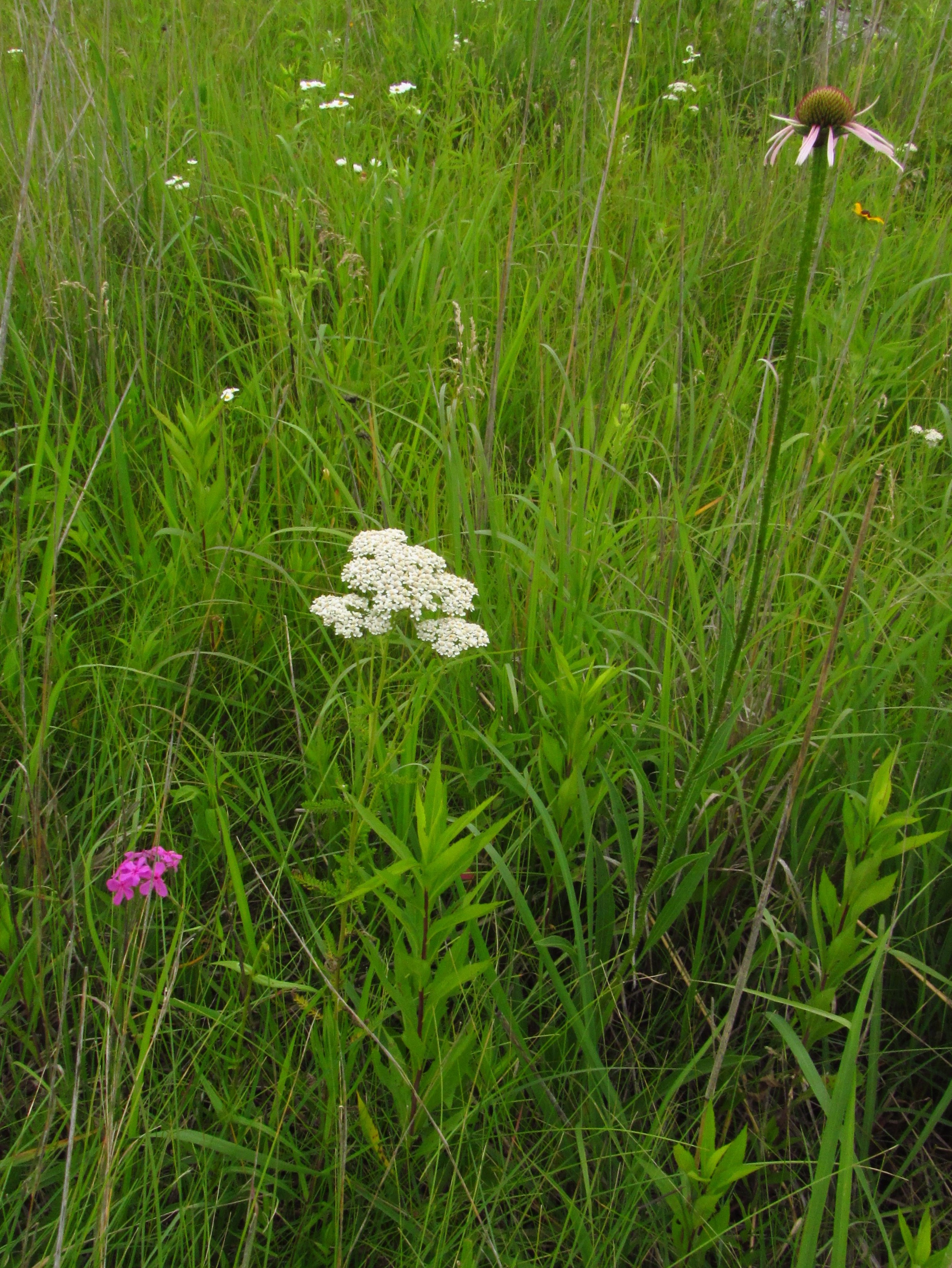 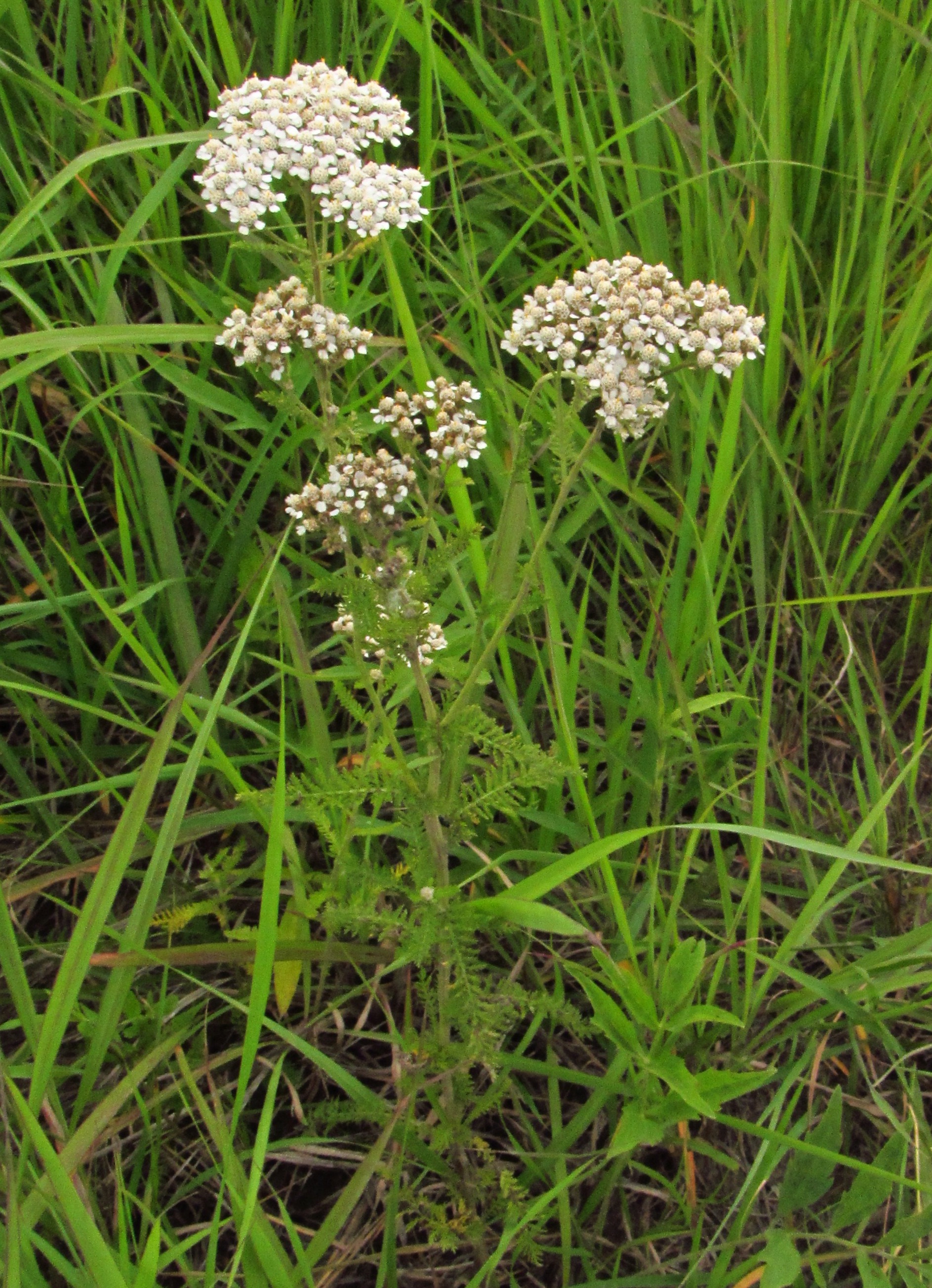 Finally, some "previews of coming attractions." This yarrow is blooming next to foliage of lead plant, which I hope to feature later this summer, if I can catch it at the right time. 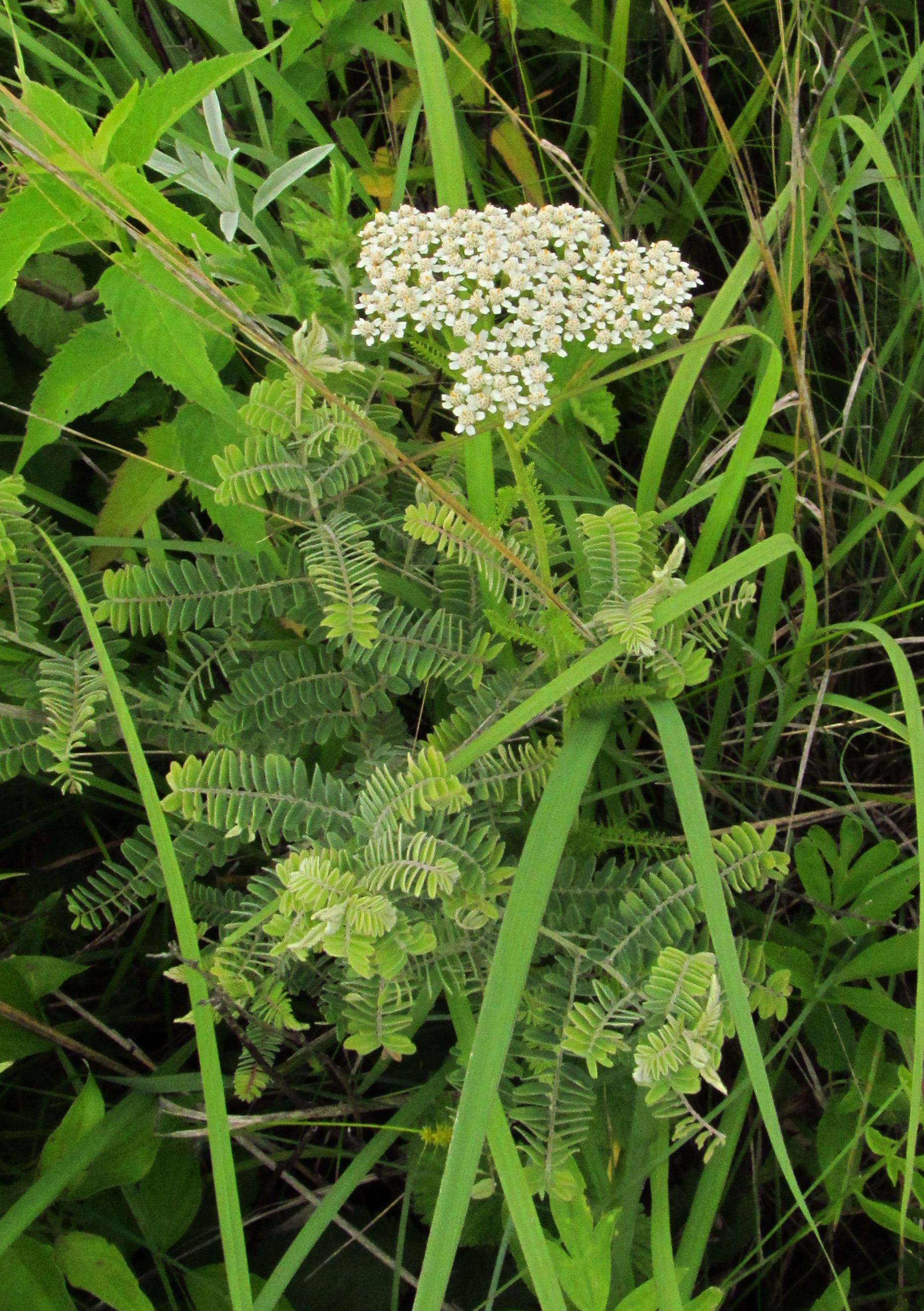 Huge base leaves of compass plant are growing behind this yarrow. In a few weeks, the compass plant will likely be more than six feet tall. 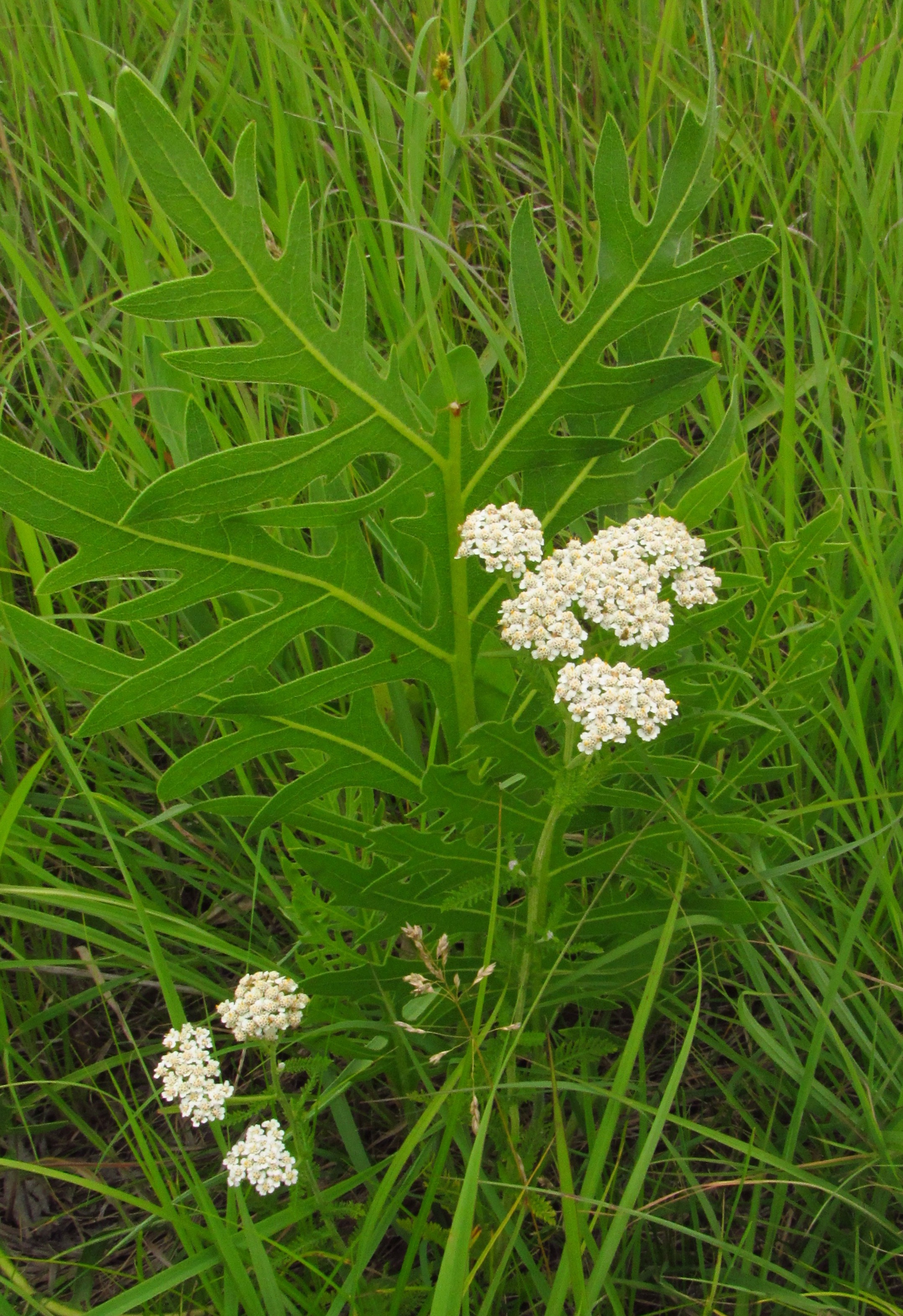 The narrow-leaved plant in the center of this picture is whorled milkweed, which will bloom later this summer. That's another black-eyed Susan on the right. 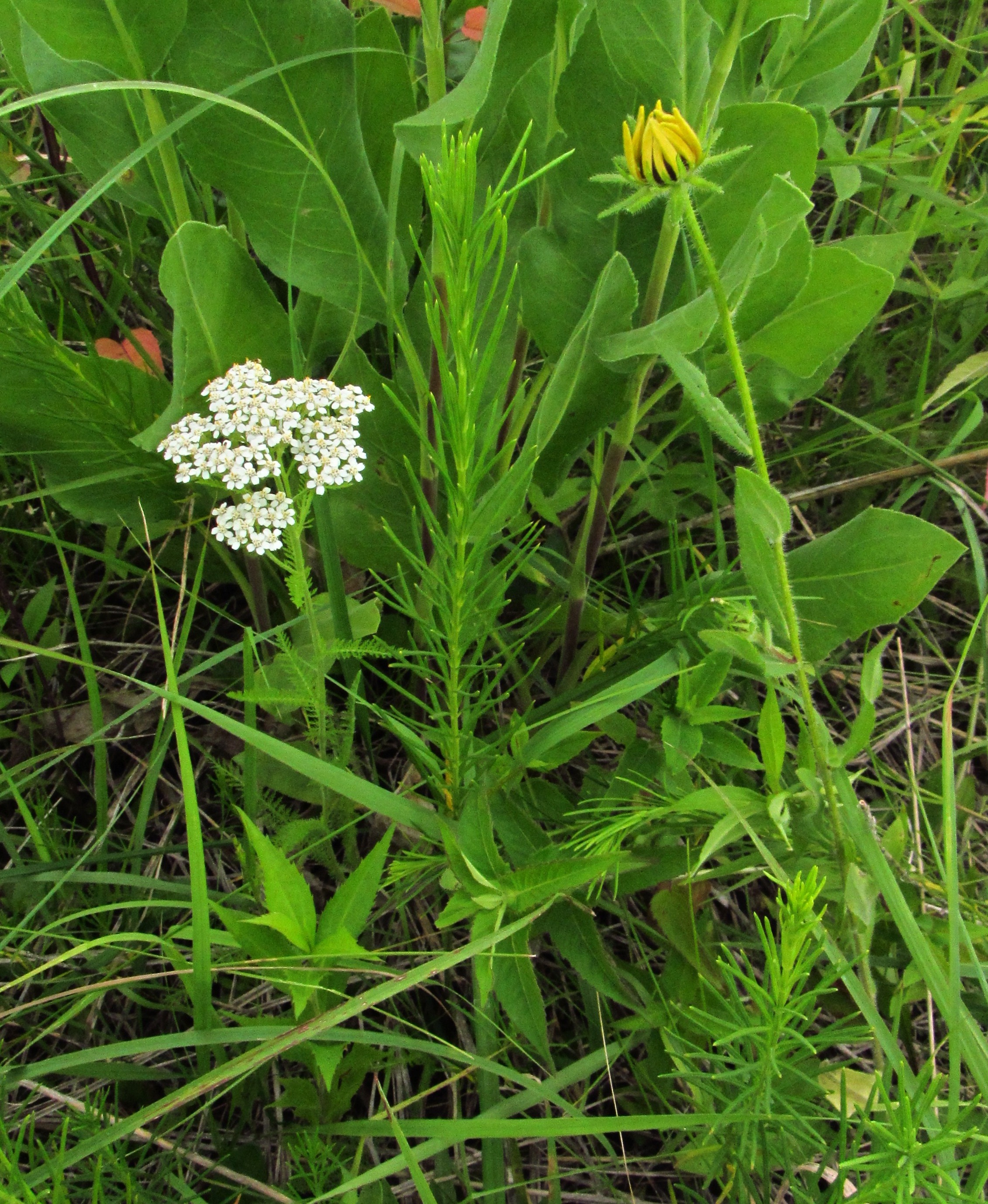 The plant with whitish leaves is prairie sage, which will bloom in August or September. 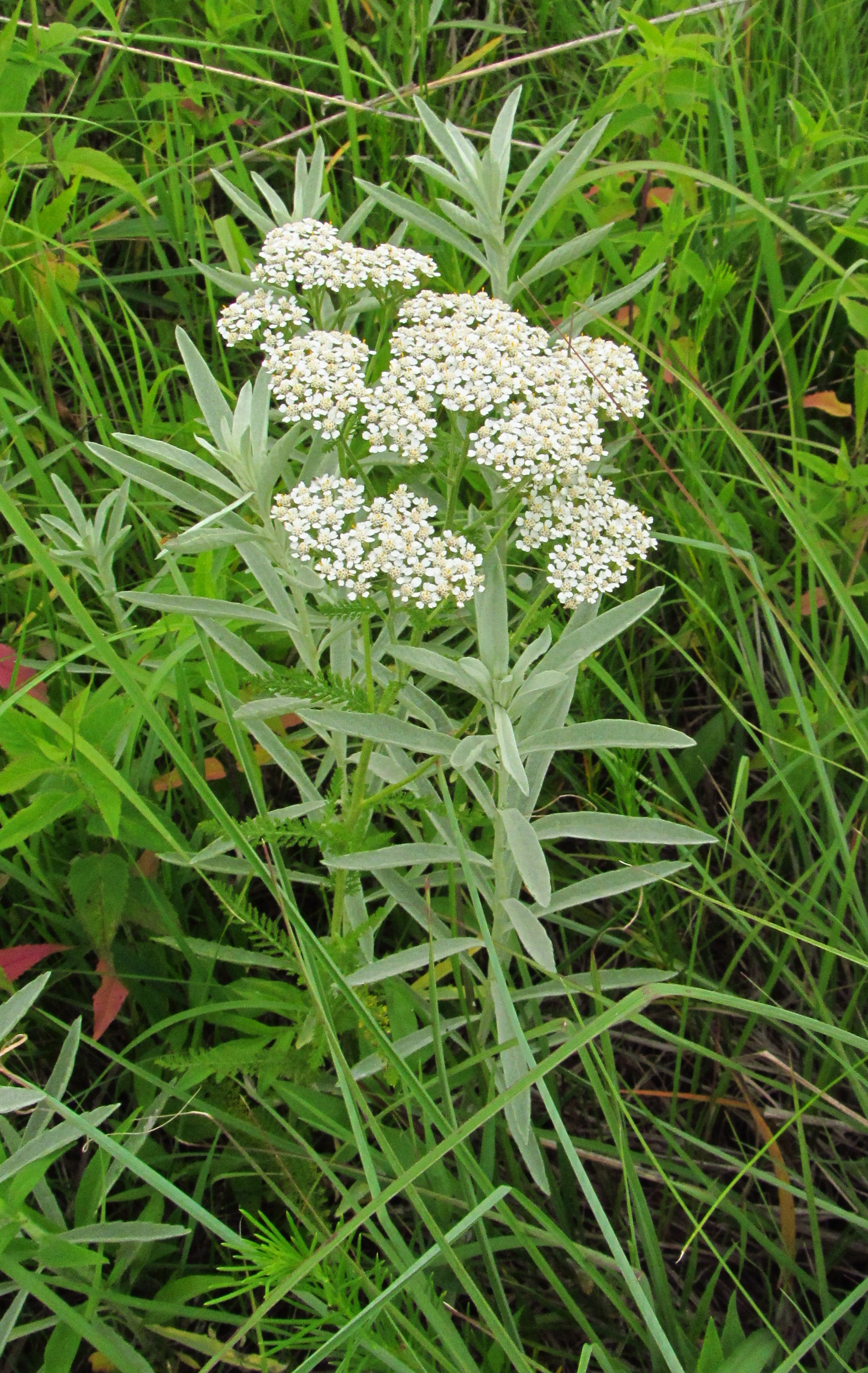