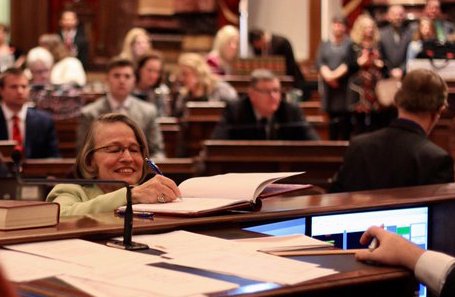 Imagine you're a newly-elected legislator. Your party leaders think highly enough of you to make you a committee chair right away. It's a good committee, handling important bills on subjects you care about.

Would you walk away from that post, less than a year into a four-year term, to spend more time running for another office? State Senator Mariannette Miller-Meeks just did.

An ophthalmologist, Dr. Miller-Meeks became the first physician to serve in the Iowa legislature since 2008 after winning an open Senate seat last year. Republicans put her in charge of the Human Resources Committee, a fantastic assignment for a first-termer.

But Senator Annette Sweeney will be running that panel during the 2020 legislative session, the GOP caucus announced on November 5. From the news release:

“During the 2019 Iowa Legislative Session I was proud of the work the Human Resources Committee accomplished on a number of important priorities, including improved transparency of prescription drug costs, creating a children’s mental health program, and passing behind the counter birth control through the Senate. I enjoyed working with the House, Senate, and Governor Reynolds to see positive results for Iowans,” said Miller-Meeks.

“Senator Miller-Meeks provided important leadership on the Human Resources Committee,” said Senate Majority Leader Jack Whitver, R-Ankeny. “I look forward to continuing to work with her on policies to reduce the cost of health care and encourage economic growth in Iowa.”

Senator Miller-Meeks is stepping down in order to allocate more time to her run for Iowa Congressional District 2.

I find the decision odd for three reasons.

A leadership role in passing bills is better than voting for them as a back-bencher.

Expertise on health care has figured prominently in all of Miller-Meeks' campaigns, including Congressional bids in 2008, 2010, and 2014, as well as last year's race in Senate district 41.

Being tied down in Des Moines during the legislative session can be a drawback for a candidate seeking another office. Democrats Pat Murphy and Abby Finkenauer reduced their Iowa House committee obligations when running for Congress in 2014 and 2018, respectively. But they were in the minority caucus, with no ability to advance legislation.

In contrast, Miller-Meeks could run important bills through Human Resources next year, which would bolster her case as a candidate for Congress. Yes, committee chairs spend a lot of time in meetings doing unglamorous work, but health care was a highly salient campaign issue in 2018 and will probably be a top concern for voters again next year.

If she were facing a tough fight for the Republican nomination in IA-02, dropping the committee post would make more sense. But the only other GOP candidate in the field, Bobby Schilling, is much less well-known in southeast Iowa. He has raised little money since declaring in July.

Meanwhile, Governor Kim Reynolds endorsed Miller-Meeks this week (statement enclosed in full below), and former Governor Terry Branstad did so last month. The door appears closed for any Republican of stature to join the field now.

The Iowa legislature typically completes its work in late April or early May, leaving Miller-Meeks about a month to campaign full-time before the 2020 primary and roughly six months before the general election, where she is likely to face Rita Hart.

Miller-Meeks just undermined one of her own talking points.

Her campaign released this statement on October 31, after House Democrats voted for a package of rules governing the impeachment inquiry.

“Rita Hart and Dave Loebsack want to reverse the 2016 election results, and this is their sad way of doing that,” said Miller-Meeks. “Due to the lack of openness and transparency, this entire process has been a stain on the institution of the House of Representatives. It hasn’t been a fair process and it’s certainly not been a process of which the American people deserve. Instead of impeaching and removing President Trump from office, Rita Hart and Dave Loebsack should focus on passing USMCA, reducing health care costs, and creating policies that will continue to improve our economy.”

By the same logic, shouldn't Miller-Meeks focus on passing legislation to reduce Iowans' health care costs, improve the economy, and so on?

I understand that it's time-consuming to raise money for a Congressional campaign and connect with voters across a large area (IA-02 covers 24 counties).

But few new legislators have the opportunity to chair an important committee. Walking away from that after one legislative session sends a bad message about Miller-Meeks' priorities. Predictably, the Iowa Democratic Party had a statement out on the committee switch within hours, blasting Miller-Meeks for putting "her own political ambition first."

In every corner of southeast Iowa, health care is the number one issue keeping voters awake at night. Families are struggling with real challenges like the rising cost of prescription drugs, limited access to rural doctors, and fallout from the state’s privatization of Medicaid.

Yet instead of using her leadership post on the Senate Human Resources committee to improve the lives of Iowans, GOP candidate Mariannette Miller-Meeks announced today that she is stepping down from the critical role to focus on her fourth run for Congress.

During next year's campaign, Hart can highlight six years of legislative work on behalf of Iowans. Though she did eventually run for higher office as the Democratic nominee for lieutenant governor in 2018, that opportunity arose after state lawmakers had adjourned for the year.

Any comments about the IA-02 race are welcome in this thread. The Cook Political Report and Sabato's Crystal Ball both still rate this open seat as a toss-up, but I am increasingly convinced the race leans to Hart.

“Mariannette Miller-Meeks is the conservative fighter southeast Iowa needs in Congress. I am proud to call her a friend and announce my support for her campaign,” said Gov. Reynolds. “We share a never-quit attitude, and I know that she’ll always go to the mat for the needs of Iowans. I am eager to join her on the campaign trail and help make the case to voters across the 2nd District.”

Miller-Meeks helped pass legislation in the 2019 session that championed Reynolds’ priorities. She helped introduce and supported a constitutional amendment that would have protected and upheld the historic Heartbeat Bill. As chair of the Senate Human Resources Committee, Miller-Meeks worked to establish a children’s mental health system, the first of its kind in Iowa. She voted to add language to Iowa’s Constitution that would protect Iowa gun owners’ rights. And, she voted to reign in liberal activist Justices and Judges by reforming our judicial nominating process.

“I’m honored to receive the endorsement of Gov. Reynolds, who I consider one of the state’s strongest leaders and a friend,” said Miller-Meeks. “Gov. Reynolds is an Iowan through and through, and works tirelessly every day to make Iowans’ lives better. She has never quit on this state, despite facing many obstacles. I will channel her strong leadership qualities promoting rural economic development, fair trade deals, skills training in apprenticeships and I will continue to advocate for healthcare and veterans issues.”

Miller-Meeks and Reynolds’ friendship dates back to before Miller-Meeks was elected to the Iowa Senate. Reynolds was part of the Branstad administration that chose Miller-Meeks to lead the Iowa Department of Public Health from 2011-2014.

Top image: Photo of Mariannette Miller-Meeks after being sworn in as a state senator, posted on the Iowa Medical Society's Twitter feed on January 15, 2019.