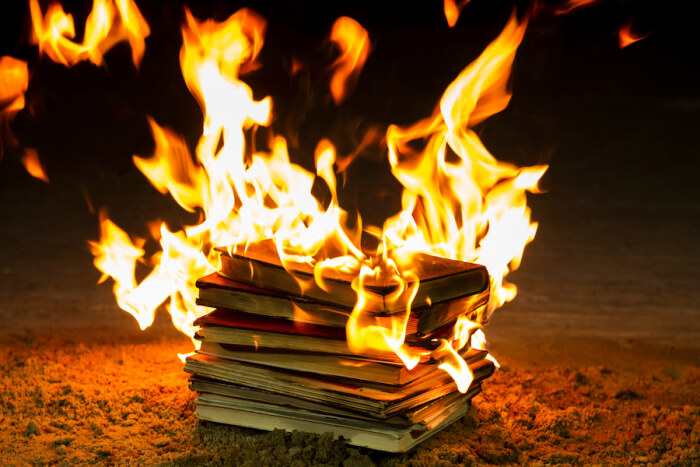 There’s some real obscenity in Iowa public schools, but it’s not the kind Iowa Senate President Jake Chapman has been ranting about.

Speaking in November at a packed school district meeting in Johnston, Chapman complained about two books and said he is drafting a bill to create a felony offense for distributing what he considers to be obscene material. Never mind that Iowa already has a number of laws about the distribution of real pornography. Chapman sees a need to single out teachers and librarians for making books he doesn’t like available to high school students.

Like most wannabe book banners, Chapman probably hasn’t read the supposedly offensive books. He is also using public schools (which should unite communities) to further divide us.

No, the obscenity is not in these books that Chapman doesn’t like. The real obscenity is what Republican legislators have done to Iowa schools. Here are some examples of the attacks on public schools, which are emptying classrooms of dedicated, teachers. U.S. Supreme Court Justice Stewart Potter famously said when deciding a pornography case, “I know it when I see it.” Let's review the GOP’s record toward public schools and teachers.

The gutting of collective bargaining in 2017 left educators with little to no voice in their daily professional lives. That law ripped apart more than 40 years of bargaining history, and caused wages and benefits to stagnate or plummet.

Bargaining was once a place to discuss real issues, but under the new law it quickly morphed into a one-sided speech by management lawyers, and allowed the district’s first offer to become its final one with little discussion. Real problem solving is gone, especially in Iowa's smaller school districts.

On top of silencing professional voices, Republican legislators thought they’d break public sector unions by requiring them to recertify every year. Even though the voting rules are unfair (counting bargaining unit members who don't participate as votes against the union), 99 percent of education associations survive.

In this year's legislative session, the GOP again attacked public schools. First, they tried to pass a voucher scheme that would siphon public money to private schools. Some rural legislators balked because they understood the plan could leave rural Iowa as an education desert, with no private school and a weakened public one.

When vouchers lacked enough support to pass, Republicans settled for a bill allowing for-profit "charter schools,” with little relationship to the community, and no oversight from the elected public school board.

Not only did they underfund public schools, they meddled in curriculum. One example was passing a law that allowed a small percentage of those voting in the last school board election the right to demand a hearing about any aspect of curriculum. While that school board hearing is pending, the curriculum in question can be suspended.

So, instead of putting the burden on a parent to meet with the teacher and discuss concerns about what’s being taught, it’s easier now to scream at a board meeting and put everything on hold for a whole class. It’s absurd and obscene.

But it didn’t stop there. The majority party couldn’t quite define critical race theory, but they heard the shouts of right-wing media so they drafted a bill on “divisive" topics, later renamed "specific defined concepts." Here’s what cannot be discussed in any government-mandated diversity training:

It really means anything that could make white people uncomfortable.

It’s no secret these laws have contributed to Iowa's shortage of regular and substitute teachers.

We can do better. Educators and parents need to put a stop to the obscenities before our public schools cease to be the center of our communities.

Bruce Lear lives in Sioux City and retired after 38 years of being connected to public schools. He was a teacher for eleven years and a regional director for the Iowa State Education Association for 27 years.