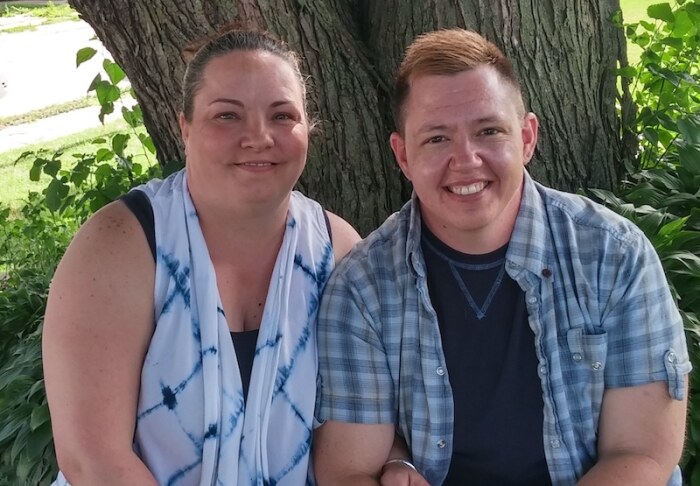 On April 1 the seven justices unanimously upheld a Polk County jury verdict, which found that the Iowa Department of Corrections unlawfully discriminated against plaintiff Jesse Vroegh. Superiors refused to allow Vroegh to use male restrooms and locker rooms when he worked as a nurse at the Iowa Correctional Institute for Women.

The court also upheld the jury's finding that the state discriminated against Vroegh by refusing to cover gender-affirming "top" surgery, even though the state's insurance plan would have covered a double mastectomy for a medical need not related to gender identity.

The state sought to overturn the jury verdict on several grounds. According to one argument, the trial court judge should have instructed the jury to focus on "whether the State’s motivation was discriminatory and not on whether the State exercised a legitimate business judgment."

However, the Supreme Court found the District Court acted appropriately, because "the State failed to articulate any nondiscriminatory reason" for not letting Vroegh use the men's facilities. Excerpt from the majority opinion:

The State claims it had two nondiscriminatory reasons to deny Vroegh restroom access: (1) that [prison warden] Wachtendorf was concerned about other staff members’ response to a transgender man using the men’s restroom, and (2) that Wachtendorf had reached an agreement with Vroegh to use the unisex restrooms in the adjacent building.

As to the first reason, discriminatory action doesn’t somehow shed its unlawfulness simply because it’s done to placate the real or perceived biases of others. […] If that were reason enough, surely much discrimination that our laws now outlaw could continue unabated under the guise of appeasing the discriminatory sensibilities of others. [...]

As to the second reason, a factual dispute arose at trial about the time period that Vroegh agreed to use the unisex restrooms in the separate building. [...] But this factual dispute is immaterial to our resolution of the larger legal issue here. Regardless of the duration, Vroegh didn't waive his rights under the Iowa Civil Rights Act by agreeing to use the unisex restrooms.

The state's other legal argument against the jury instruction failed for the same reason: defendants never provided "a legitimate, nondiscriminatory reason" for the Department of Corrections actions that were unrelated to Vroegh being transgender.

Rita Bettis Austen, legal director of the ACLU of Iowa, hailed the "historic victory for civil rights in Iowa," adding that the ruling "makes real the promise of nondiscrimination protections in employment that our legislature put in place for transgender Iowans in 2007."

Vroegh said he was "so happy" the high court "has recognized that transgender people like me should be treated just the same as everyone else when it comes to medical care—that if a doctor says I should receive medical treatment, I get the treatment."

It's not the first time several of these justices ruled on an important transgender discrimination case. In 2019, Christensen authored the court's unanimous opinion in Good v. Iowa Department of Human Services, which found that denying Medicaid coverage for gender-affirming surgeries violated the Iowa Civil Rights Act. Mansfield, Waterman, and Appel joined that opinion.

McDonald didn't take part in the Good decision, having joined the court after the justices had heard oral arguments. Reynolds named Oxley and McDermott to the court the following year. It's noteworthy that those three justices, all considered conservatives, were no more receptive to the state's arguments in the latest case involving gender identity discrimination.

Reynolds herself seems to delight in treating transgender Iowans like second-class citizens and never appeared to comprehend the court's findings in Good. The opinion in Vroegh makes one wonder how the Iowa Supreme Court would view a possible challenge to the new state law excluding trans girls and women from sports teams that conform to their gender identity.

Six U.S. Supreme Court justices held In Bostock v. Clayton County, Georgia (June 2020) that Title VII of the Civil Rights Act of 1964, which prohibits employment discrimination “because of sex," also forbids discrimination against gay, lesbian, and transgender employees. The majority opinion by Justice Neil Gorsuch determined that even though Congress didn't have sexual orientation or gender identity in mind decades ago, the "plain meaning" of the federal law's text led "ineluctably" to that interpretation.

Using similar logic, the Polk County jury found in 2019 that Vroegh was a victim of sex discrimination as well as gender identity discrimination.

McDermott's opinion rejected that analysis: "We look to the federal courts’ interpretations of similar constitutional and statutory language as persuasive authority, but we aren’t bound by them. Iowa’s courts have interpretive authority over Iowa’s statutes."

The majority opinion in Vroegh drew instead on an Iowa Supreme Court ruling from 1983 (Sommers v. Iowa Civil Rights Commission). In that case, the court "stated that the legislative purpose in adding protection on the basis of sex was 'to place women on an equal footing with men in the workplace,' not to forbid discrimination against transgender people." Indeed, the legislature and governor amended the Iowa Civil Rights Act in 2007 to make sexual orientation and gender identity protected classes.

Justice Appel disagreed, and in his partial dissent pointed to the legislature's directive that the Iowa Civil Rights Act "shall be construed broadly to effectuate its purposes."

Nevertheless, this difference of opinion could become important for future cases. By siding with the U.S. Supreme Court's dissenters rather than with the Bostock majority, the Iowa Supreme Court signaled that it might not stand in the way of discrimination on the basis of sexual orientation and gender identity, if language explicitly protecting LGBTQ Iowans were removed from the state's Civil Rights Act.

Bills seeking to remove gender identity from that Iowa Code chapter did not advance in 2020 or 2021. But state House or Senate Republicans may try again next year. The legislature moved quickly in 2019 to stop Iowa's Medicaid program from covering gender-affirming surgery after the Iowa Supreme Court found in favor of the two plaintiffs in Good. Reynolds signed that law after refusing to meet with any Iowans who would be adversely affected.

3. The latest ruling provides few clues on how the Iowa Supreme Court will approach the next big transgender discrimination case.

While employed by the Department of Corrections, Vroegh received health insurance coverage through the state's plan, which was administered by the private company Wellmark Blue Cross/Blue Shield. The ACLU of Iowa noted in an April 1 news release that the state plan now covers gender-affirming care when medically necessary.

However, Iowa's Medicaid program still does not cover gender-affirming surgery for transgender recipients. A law Republicans enacted on the final day of the 2019 legislative session amended the Iowa Civil Rights Act for that express purpose. Aiden Vasquez and Mika Covington filed suit, claiming that law is unconstitutional. A Polk County District Court ruled in their favor in November 2021, saying the 2019 law "violates the Equal Protection Clause of the Iowa Constitution on its face and as applied."

The state appealed the decision, so the Iowa Supreme Court will likely hear oral arguments in that case later in 2022 and should rule sometime during the first half of 2023. The high court didn't consider constitutional claims when justices decided the Good case, because the justices found the state policy banning Medicaid coverage for gender-affirming surgery violated the Iowa Civil Rights Act. Vroegh's lawsuit didn't raise constitutional issues either.

Appel will reach the mandatory retirement age this summer, so Reynolds will have a chance to appoint a fifth Supreme Court justice before the Vasquez and Covington case is resolved.

Jesse Vroegh (rhymes with "flew") worked as a nurse at the DOC and was denied healthcare coverage for medically necessary gender-affirming surgery because he is transgender, even though the state’s employer-provided healthcare insurance covered the same type of surgery for employees who are cisgender. He was also banned from the men’s restrooms and locker room at work.

The jury found that Vroegh was indeed discriminated against in health care coverage. The jury also found that it was illegal employment discrimination to ban Jesse from using the men’s restrooms and locker room at work, just like all his other male coworkers.

Vroegh's was the first such jury case brought under the Iowa Civil Rights Act since it was amended in 2007 to expressly prohibit discrimination against transgender people at work.

The state has since started providing this coverage for all employees, as required by both state and federal nondiscrimination laws.

"This day has been a long time coming. I am so happy that my state supreme court has recognized that transgender people like me should be treated just the same as everyone else when it comes to medical care—that if a doctor says I should receive medical treatment, I get the treatment.

"I want to say thank you to those who have made this victory possible. I thank the Iowa Supreme Court for recognizing that transgender people should be treated equally under the law. I want to thank the ACLU and Melissa Hasso for representing me and helping me file this lawsuit. And I want to thank my wife, Jackie, who has stood by me and supported me in all of this. She is an amazing person."

"This is a historic victory for civil rights in Iowa, because it makes real the promise of nondiscrimination protections in employment that our legislature put in place for transgender Iowans in 2007.

"Despite those longstanding protections, Mr. Vroegh’s employer, the State of Iowa, repeatedly denied his requests to use the men’s restrooms and locker rooms consistent with his gender identity at work, and the state’s employee health insurance program excluded coverage for the medically necessary gender-affirming surgery for transgender employees, even though it covered the same procedures so long as they were not to treat gender dysphoria.

"The state should have been a model for other employers in its treatment of a transgender worker, but instead blatantly discriminated against Jesse, who only ever asked to be treated the same as his coworkers.

"We are so grateful to Jesse Vroegh, our inspiring and brave client, for taking on this first-of-its kind legal battle in our state and doing so much to build support and change hearts and minds for those who will come after him. We are also grateful to the Iowa jurors who saw through the state's discriminatory arguments and rendered justice for Jesse, and to the Iowa Supreme Court for upholding their verdict. The victory today simply would not have been possible without the stellar work of Iowa civil rights attorney Melissa Hasso, and John Knight, our co-counsel with the national ACLU LGBTQ Rights Project.”

"The court's ruling today is a very important step forward for our transgender friends, relatives, and co-workers in their efforts to live productive and rewarding lives. It has truly been an honor to represent Jesse and to work with my bright and dedicated colleagues at ACLU Iowa throughout this long battle. Most of all, we are all very proud of our fellow Iowans who sat on the jury, heard the evidence, and reached a decision that promotes equality and justice over discrimination and hatred."

Jesse is represented by the American Civil Liberties Union of Iowa, the ACLU LGBT Project, and Melissa Hasso with the Sherinian & Hasso Law Firm in Des Moines.

Top image: Jesse Vroegh (right) and his wife in photograph provided by the ACLU of Iowa.