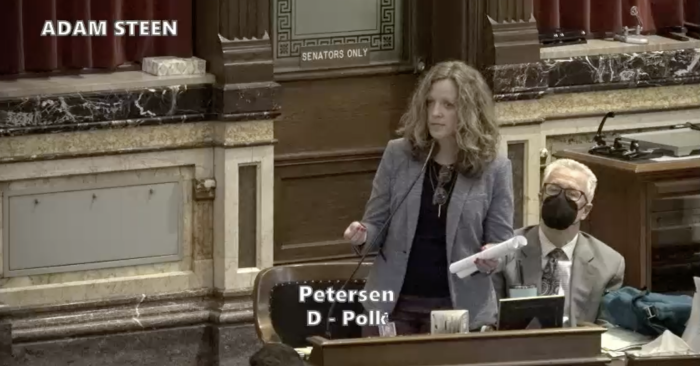 Speaking to fellow senators on April 25, Petersen expressed concern about how many complaints continue to be filed, despite Governor Kim Reynolds' stated "zero tolerance" policy on harassment.

She said the Department of Administrative Services told her there are 199 pending cases but refused to break down the numbers by type of complaint or class of employee affected. Senators have not even been told whether any of Reynolds' nominees or appointed agency directors have been the subject of a workplace environment investigation.

Petersen also faulted the DAS for not informing those who initiate cases about the agency's findings.

Petersen delivered what she called a "message" to the human resources agency and the governor's office during Iowa Senate debate on the confirmation of DAS Director Adam Steen. Appointed by Reynolds in early 2021, he lacked enough Democratic support to be confirmed during last year's legislative session. The governor withdrew his nomination but also refused to accept his resignation. Steen needed at least 34 votes in the 50-member Senate to stay in the position. He received unanimous (44 to 0) support.

A member of the Iowa Senate Government Oversight Committee, Petersen has long been outspoken about sexual harassment problems in state government. In this speech, she made clear immediately that she planned to support Steen's appointment. But she wanted to alert senators to some concerns about DAS.

Since 2012, Petersen said, Iowa taxpayers have covered $28 million in judgments and settlements for claims regarding discrimination, retaliation, or sexual harassment. She recently asked DAS where Iowa stands on this issue and was told the agency has 199 cases pending.

After asking for more specifics, such as what areas of state government are "more problematic than others" when it comes to workplace harassment, she was "unable to receive that information."

DAS also declined to tell Petersen how many of the pending cases were related to an alleged hostile work environment vs. sexual harassment, or how many complaints were deemed founded or unfounded.

IOWANS WHO FILE COMPLAINTS NOT INFORMED ABOUT RESULTS

Petersen said she asked what happens after someone requests an investigation related to the workplace atmosphere in a state agency. Does the complainant eventually learn about the resolution?

According to Adam Steen, they are notified when the investigation's over.

But you know, if you're in a hostile work environment, and you have the courage to step forward and say that there's problems, to not find out if the results were founded or unfounded, I think it's really problematic.

Since Iowa taxpayers foot the bill for any payouts related to workplace harassment, Petersen called for state government to "do a better job" of making sure Iowa's public servants are "being decent people in the workplace."

Petersen continued, "We as senators should know if any of the gubernatorial appointees have been involved in any cases revolving around workplace harassment [or] hostile work environment."

When she asked DAS whether any nominees awaiting a confirmation vote have been under investigation for those issues, "I was told that I couldn't receive the list."

A related concern: agency heads are typically informed about the results from an investigation related to the workplace environment. But if a state agency or department director is accused, the eventual report goes to the DAS director. "So I don't even know if Governor Reynolds finds out if any of her appointees were involved in a situation of a hostile work environment or a sexual harassment situation," Petersen said.

In her view, the DAS director "needs to notify our governor, who says she has zero tolerance for sexual harassment."

In closing, Petersen repeated that she would support Steen's confirmation, but said she wanted to send a message to DAS and the governor's office.

I don't think we're doing a good enough job on this area yet. And I don't want taxpayers to have to continue to foot the bill because we don't have the right policies in place.

And I hope that if the governor does have people leading any of these agencies or departments that have been involved in a situation like this, I would hope that the DAS director would have the authority to notify her and her administration that this is going on.

And I certainly hope that there are no appointees before the Iowa Senate body that are up for appointment this year that have been involved in a founded case.

It's hard to imagine someone in Steen's position wouldn't inform the governor's office about a complaint involving an agency director. I will update this post as needed if DAS staff clarify their policy.

The most recent known case of an Iowa agency director being accused of sexual harassment was Dave Jamison of the Iowa Finance Authority. An independent review of that scandal found that two of the director's subordinates took their complaints straight to the governor's office, because they didn't feel safe going through DAS channels.

Reynolds fired Jamison in 2018, hours after she learned about the allegations. The state later settled with his accusers for $4.15 million.

As a member of the board that reviews proposed settlements against state government entities, State Auditor Rob Sand voted against accepting the terms with Jamison's accusers, primarily because it did not require the state to seek restitution from the perpetrator.

Sand was the guest on the April 29 edition of the Iowa PBS program "Iowa Press," where the show's moderator O.Kay Henderson asked why he tends to vote against settlements in sexual harassment cases.

So, let me be clear, I vote no on sexual harassment when it is so bad that we could actually file a lawsuit to go after the perpetrator of the harassment. That isn't every case. But we have a law that is sitting there in the state of Iowa that we have never used to hold these people personally accountable. [...]

Here's the issue as I see it, every time this happens that settlement is paid with taxpayer dollars. Why? Taxpayers didn't do that sexual harassment. We have a law sitting there that will allow us, in these certain cases that are bad enough. to go after the people who did it and hold them personally accountable.

So not only did we cover him for sexual harassment, but now we're going to pay his IPERS?

Erin Murphy of the Cedar Rapids Gazette then asked about pushback Sand has gotten when he has floated this idea.

Well, okay, do we want everything to continue being the same with how we handle sexual harassment? Or maybe we should do things that we haven't done before to try to change it.