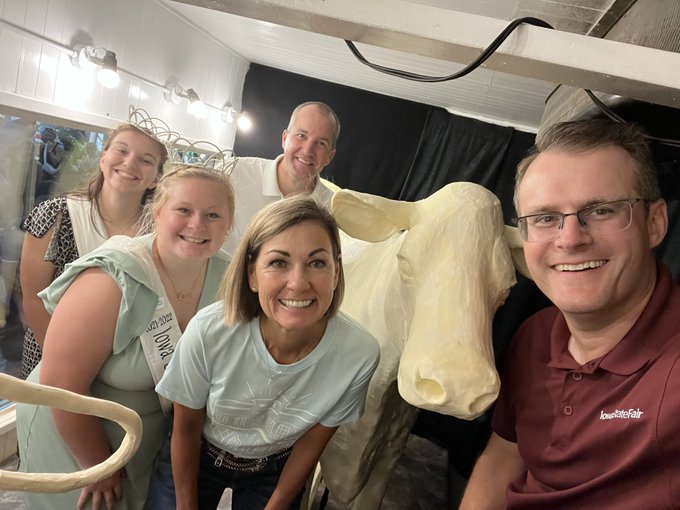 Politicians love spending time at the Iowa State Fair, and many candidates for state and federal offices made multiple visits this year. But in a break with a long-running practice, Republicans seeking statewide and federal offices mostly shunned the Des Moines Register's Political Soapbox.

Just three of the eleven GOP candidates invited to the Soapbox were willing to devote 20 minutes of their state fair visit to a public speech outlining their agenda. Every elected Republican official steered clear.

Avoiding the Register's platform is another sign of growing Republican hostility toward traditional Iowa media. Other recent examples: some GOP candidates refused to meet with high-profile editorial boards in 2018 and 2020, and Iowa Senate leaders abandoned more than a century of tradition to kick reporters off the chamber's press bench this year.

The Des Moines Register Political Soapbox was available to all 24 candidates for federal or statewide offices who qualified for the general election ballot. The newspaper was flexible, offering 20-minute speaking slots to candidates "every day of the 2022 fair, except Sundays."

Nixing the Soapbox were U.S. Senator Chuck Grassley, U.S. Representatives Ashley Hinson, Mariannette Miller-Meeks, and Randy Feenstra, Governor Kim Reynolds, Secretary of State Paul Pate, Secretary of Agriculture Mike Naig, and state treasurer candidate Roby Smith. In response to Bleeding Heartland's inquiry, staff at the Register declined to specify which of those candidates "did not respond to repeated invitations" and which expressly "declined to participate."

Every one of those candidates spent a significant amount of time at the fair. Reynolds, Naig, and Pate were there nearly every day, their social media feeds show. Hinson visited the fair at least twice, while Grassley, Miller-Meeks, and Feenstra each posted from the fair on three different days.

The only 2022 GOP candidates who spoke on the Des Moines Register Political Soapbox were Brenna Bird (attorney general nominee), Zach Nunn (third Congressional district), and Todd Halbur (state auditor). Notably, all are running against Democratic office-holders. As a general rule, challengers have more to gain from free media exposure, compared to incumbents who can more easily make the news in other ways.

As the Register explains, the Soapbox "provides a space for real political discussion. Face-to-face with Iowans, candidates must explain and defend their policy positions in front of a live audience." Members of the public don't often interact with politicians during Soapbox speeches, but candidates may face tough questions afterwards from reporters—or from political operatives. For instance, GOP consultant Luke Martz tried to make State Auditor Rob Sand look bad after the Democrat's Soapbox appearance.

Republicans weren't always shy about delivering a stump speech at the Iowa State Fair. In 2010, past and future Governor Terry Branstad spoke at the Soapbox, as did Secretary of Agriculture Bill Northey and four of the five GOP nominees for U.S. House, including then-challenger Miller-Meeks. (I couldn't find any record of Grassley accepting a Soapbox invitation the last two times he was up for re-election.)

Four years ago, Reynolds spoke on the Soapbox, as did incumbents Pate, Mosiman, and Naig, and GOP state treasurer contender Jeremy Davis. (Republicans did not field an attorney general candidate in 2018.) Republican candidates in two of Iowa's four Congressional districts were represented too.

No one begrudges politicians the endless opportunities the state fair provides for friendly encounters with Iowans: viewing the butter cow, celebrating century and heritage farms, flipping pork chops and serving hard-boiled eggs, touring animal barns and exhibits, hanging out at the Iowa GOP's booth, even polka dancing. And Reynolds, Grassley, Feenstra, Miller-Meeks, Hinson, and Naig all made time during their state fair outings to take softball questions from hosts on conservative WHO Radio.

It's not too much to ask candidates to spend a few minutes on a publicly accessible stage to explain why they're running, why Iowans should vote for them, and what they plan to accomplish in office.