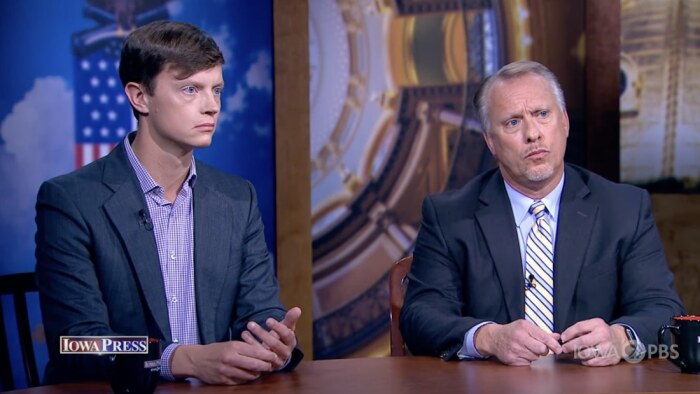 When Governor Kim Reynolds made news in May by pleading with supporters to help her get her "own" attorney general and a state auditor who wouldn't scrutinize her actions, Republican Party of Iowa state chair Jeff Kaufmann defended the appeal. In a written statement, Kaufmann said the governor "should be promoting Republican candidates up and down the ticket," because "Iowans know how worthless our current state auditor, state treasurer and attorney general have been."

But since Mary Ann Hanusa (the insiders' pick for state auditor) unexpectedly lost the GOP primary in June, top Iowa Republicans have done virtually nothing to support the party's nominee Todd Halbur. He goes into the home stretch of the campaign with little money or media exposure. Meanwhile, the incumbent Rob Sand is on track to spend more than a million dollars on various forms of advertising.

Halbur did not respond to phone or email messages seeking comment on the lack of support from his party, and whether it's related to the whistleblower lawsuit he filed, naming one of Reynolds' appointees.

Campaign finance disclosures show the Iowa GOP has distributed funds to most of its statewide candidates this year. The party contributed $10,000 in July and $140,000 in October to attorney general candidate Brenna Bird.

The party gave Iowa Secretary of Agriculture Mike Naig $10,000 in September and another $140,000 in October. (Naig's latest filing with the Iowa Ethics and Campaign Disclosure Board mentioned the $10,000 contribution but omitted the $140,000 one.) Naig also received $50,000 from the Republican State Leadership Committee, which mostly supports state legislative candidates.

Secretary of State Paul Pate received $10,000 from the state party and $15,000 from the Republican State Leadership Committee in September.

Bird, Naig, and Smith have also received four-figure or five-figure donations from many individuals who are major donors to Iowa GOP candidates year after year, as well as support from Republican or corporate political action committees.

In contrast, state party leaders and reliable donors have given nothing to Halbur's campaign. In the month after his surprise primary victory, he took in $2,050 in contributions, and gave $1,100 of that total himself. Similarly, from mid-July to mid-October, Halbur's campaign reported just $19,697 in contributions, of which $10,000 came from the candidate. Ten county GOP organizations gave Halbur nearly $7,000 combined.

Bleeding Heartland's review of Federal Communications Commission political files show Halbur hasn't reserved any television air time. According to Facebook's ad library, his campaign page has not run any Facebook ads this year. He has 72 Twitter followers and has tweeted only four times since the primary.

Meanwhile, Sand's campaign reported $274,135.60 in contributions from mid-July to mid-October, of which $25,000 came from the candidate. The state auditor's campaign spent $774,515.57 during the same period, including around $490,000 for media buys. Two television commercials (enclosed below) have been on the air in Iowa's four largest tv markets (Des Moines, Cedar Rapids, Quad Cities, and Sioux City). A news release in early October said Sand was planning a "statewide, seven-figure media campaign"—which is feasible, since he reported $617,799.06 cash on hand as of October 14.

At a campaign event in May, Reynolds indicated that defeating Attorney General Tom Miller and Sand would be priorities. "I want my own AG, please!" she shouted into the microphone. "And I need a state auditor that’s not trying to sue me every time they turn around. Focus on your office!” WHO-TV reporter Taj Simmons posted this video:

I realized my tweet about Gov. Reynolds' enthusiasm for a GOP AG and State Auditor at her campaign event this weekend blew up this evening...I figured I would share the video of the remarks I transcribed above in this thread. pic.twitter.com/WMJs8qiqKn

Sand has never sued the governor, by the way. He has released reports challenging her use of federal COVID-19 relief funds for a computer system, governor's office staff salaries, and advertising featuring Reynolds. The auditor's office has also highlighted problems associated with Iowa's privatized Medicaid program.

But identifying possible misuse of taxpayer dollars is a core function of the state auditor's job. The office is also supposed to promote efficient and effective uses of government funds.

Reynolds isn't used to anyone holding her accountable, which may be why she resents Sand.

In any event, at her recent "Harvest Festival" fundraiser, Reynolds said she'd like to have "my own attorney general" to help her push back on the Biden administration. But she didn't mention electing a new auditor, and Halbur was not among the many GOP candidates who attended.

WHY DID THE GOP ESTABLISHMENT GIVE UP ON THIS RACE?

Four of the last six elections in Iowa have been GOP waves, and history suggests the party out of power in Washington tends to do well in a midterm. Why wouldn't Republicans try to seize an opportunity to knock out Sand, widely seen as a possible future candidate for governor?

Internal GOP polling may have shown Sand in a strong position earlier in the year. That, combined with the Democrat's resources (Sand's campaign reported more than $1.1 million cash on hand in July), may have convinced GOP strategists that it wasn't worth marshaling the resources it would take to win the race. There is no national organization supporting state auditor candidates, whereas the Republican Attorneys General Association has poured $2 million into Bird's campaign.

Second, Halbur may be facing retribution now because he dared to oppose the favored candidate. Former State Representative Mary Ann Hanusa launched her campaign in January with immediate endorsements from Reynolds, Senator Chuck Grassley, and Senator Joni Ernst. She was invited to fly with other statewide candidates to all four Republican district conventions in April. Former Governor Terry Branstad was among the GOP luminaries to donate to Hanusa's campaign, and a half-dozen current and former members of Congress endorsed her.

Halbur got in the way. Although few Iowans had heard of him when he qualified for the ballot, he edged out Hanusa by a 51 percent to 49 percent margin.

A third factor may be relevant: Halbur had sued the Iowa Alcoholic Beverages Division and its director, Stephen Larson, for wrongful termination. The disputed events occurred while Reynolds was governor, and she reappointed Larson. Earlier this month, a Polk County jury found in favor of Halbur and awarded him $1 million. The Des Moines Register's William Morris explained the gist of the case.

In early 2018, according to court filings and trial testimony, he told Larson and other officials that the division, which by law can charge only a 50% markup on wholesale prices, was violating the statute when it purchased large quantities of liquor at a discount, then sold that liquor to retailers at its regular price, which was more than 150% what the state had paid for it. From 2013 to 2017, the state collected more than $8.1 million in excess revenue, according to Halbur's court filings.

The other issue involved a contract between the division and Beverage Merchandising Inc., or BMI, to design a digital system to administer suppliers' promotional discounts and rebates. In June 2017, the division contracted with BMI to develop the system without going through the state's competitive bidding process. Halbur believed that was illegal, and after several conversations over the following months, told Larson in June 2018 that he would no longer sign off on invoices from BMI.

Within weeks, superiors removed some of Halbur's duties. Then he was out of a job. He explained during an October 21 appearance with Sand on the Iowa PBS program "Iowa Press,"

I was the Chief Financial Officer of a state agency for three and a half years. Me and my executive team, I went to the executive team, to the administrator and to advise them that with this information that was discovered through a third party consultant, it wasn't just my own analysis, it was me confirming the analysis of the consultant, that we should go to the Auditor's Office, the AG's Office and the Governor's Office through the Department of Management [...].

Halbur was fired before he could take his findings to those other state entities.

From my perspective, Reynolds should thank Halbur for taking a stand against malfeasance in a state agency. But the governor may view this episode (and the subsequent lawsuit) as evidence she can't trust Halbur not to closely scrutinize other happenings in her administration.

When Sand highlights wrongdoing or misspent funds, Reynolds tries to spin it as a partisan attack. She wouldn't be able to do that with a Republican who took his watchdog role seriously—like State Auditor Richard Johnson did during Branstad's first stint as governor.

When "Iowa Press" host O.Kay Henderson asked Halbur what his relationship would be like with Reynolds, if both are elected in November, he answered diplomatically.

That's a nice idea. But for whatever reason, Reynolds has no use for Halbur. She is spending none of her political capital or campaign war chest to help elect him.

Incidentally, "Iowa Press" panelist Erin Murphy asked the Republican about the fundraising disparity in this race. Halbur replied, "I think I have the appropriate amount of money to beat my opponent. Unfortunately, Rob is continuing to raise money and I'm not sure he's going to have enough money to beat me."

Stranger things have happened than an under-funded candidate riding a wave to a statewide victory. So if a Republican landslide materializes on November 8, Halbur's optimism could be validated. But for now, Sand is favored to win a second term.

UPDATE: Halbur told the Des Moines Register's Brianne Pfannenstiel, “The numbers in a ‘red wave’ situation — I'm banking a little bit on that, obviously, [...] I'm not taking that for granted, but I think those numbers support me.”

SECOND UPDATE: The other GOP candidates for statewide offices (Pate, Naig, Bird, and Smith) have been included on a bus tour organized by the Reynolds campaign. I've seen no sign of Halbur in any photos from those events.

"Annoying" (which imitates the style of the sitcom "The Office") launched in early October: