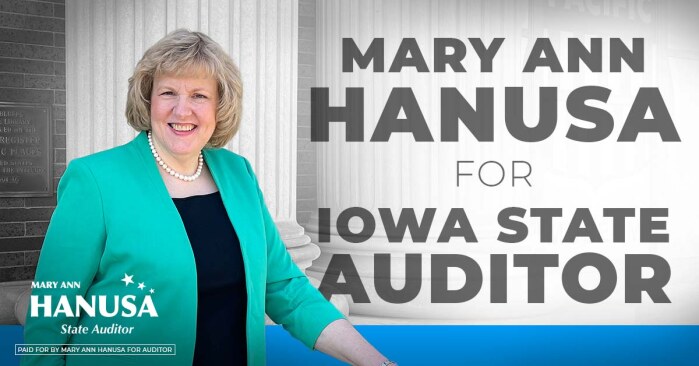 Former State Representative Mary Ann Hanusa finally gave up her Congressional ambitions and announced on January 5 she's running for state auditor. She won't face any competition in the Republican primary, coming out of the gate with endorsements from Governor Kim Reynolds, Senator Chuck Grassley, and Senator Joni Ernst.

Whether Hanusa emerges as a strong challenger will become more clear as her campaign unfolds, but here are some initial thoughts.

As a state legislator, Hanusa showed some independence from party leaders. She voted against the 2017 law that undermined collective bargaining rights (probably influenced by her work for the Council Bluffs school district). She also opposed a so-called “water quality” bill that was a top priority for the governor in early 2018. Most of her House Republican colleagues never cast even one significant vote leadership didn't approve.

Hanusa's campaign website boasts, "During my tenure as the Chair of the House Government Oversight Committee, we asked hard questions of state officials to ensure that government offices were run efficiently and in the best interest of Iowans and that tax dollars and government resources were used appropriately."

She chaired that committee only for her last two years in the legislature (2019 and 2020). She did convene a few meetings to hear from top officials in the Iowa Department of Human Services and leaders of private insurance companies that held contracts to manage Medicaid care for Iowans. During the same period, the Iowa Senate Government Oversight Committee did nothing comparable.

But Hanusa was hardly an aggressive watchdog. A planned March 2020 meeting to explore problems at the Glenwood Resource Center for Iowans with disabilities was canceled due to COVID-19 and never rescheduled. Under Hanusa's leadership, the committee did not look into the use of federal pandemic relief funds or any number of issues affecting thousands of Iowans.

Judging from her website, the GOP candidate's main line of attack against Sand will be that he uses his office "to score political points" or "for political witch hunts." But Sand has exposed problems with Iowa's privatized Medicaid program. He sounded the alarm about Reynolds approving $21 million in CARES Act funds for the Workday computer system. Iowa was forced to return that money to the Coronavirus Relief Fund, after federal auditors agreed the computer system was not a necessary expenditure incurred due to the pandemic.

The prospect of a state audit appears to have scared Reynolds off from spending $13 million in CARES Act funds for an IT project that (like Workday) was approved months before COVID-19 arrived in Iowa. Reynolds ordered that money returned to the Coronavirus Relief Fund and is using $13 million from the American Rescue Plan instead.

Sand also ordered a review of how National Guard "strike teams" were assigned to conduct COVID-19 testing at business workplaces, after Bleeding Heartland reported that Reynolds fast-tracked testing for a company linked to a major Republican donor. His office is investigating no-bid contracts related to the pandemic, like buying non-medical face masks and other PPE from GOP vendors.

Iowa's last Republican state auditor took a narrow view of her job duties and went along to get along, even when huge scandals at state entities were begging to be investigated.

In contrast, Sand fought all the way to the Iowa Supreme Court to scrutinize a billion-dollar, 50-year deal to lease the University of Iowa’s utility system to a public-private partnership. The justices (all but one of them conservatives) unanimously ruled in Sand's favor. I see nothing in Hanusa's record to indicate she would take on that kind of battle.

Throughout the 2018 campaign, Mosiman and her allies falsely claimed Sand could not hold the office because he isn't a certified public accountant. The incumbent kept asserting that even after multiple Republican county attorneys agreed state law does not require the auditor to be a CPA. The same falsehood was also the main GOP talking point against Democrats' 2014 state auditor nominee Jon Neiderbach.

Guess who isn't a CPA, and has no work experience related to that field?

Fundraising could be a challenge for the Republican.

Hanusa's campaign website doesn't mention that she was the GOP nominee for Iowa secretary of state in 2006. She lost to Michael Mauro by 53.6 percent to 46.3 percent. In fairness to her, it was a bad year to be on the ballot as a Republican. And she got an unusually late start, having been nominated in August of the election year after the winner of the GOP primary dropped out.

Even so, Hanusa raised less than $55,000 before the general election (see here and here). That's a remarkably small number, considering the connections she must have had after working in the George W. Bush White House, and before that for Senator Grassley and President George H.W. Bush.

Hanusa wasn't a big fundraiser as a state lawmaker either. For her last re-election campaign in 2018, she only raised about $48,000 (see here, here, here, here, and here). The Republican Party of Iowa ended up spending around $80,000 to bail her out in that race—and she barely won against a Democrat who had little support from his party.

During her first two quarters as a Congressional candidate last year, Hanusa raised $37,793.85 and $65,288.49, which is respectable but would not go far in a statewide campaign. Since she only just declared, she won't need to report her current campaign's fundraising totals until mid-May.

Sand raised more for his 2018 race than any previous candidate for Iowa state auditor and will likely spend millions on his re-election bid. (State candidates who were active last year must report their campaign's 2021 fundraising by January 19.) With a large email list and a much larger social media following than his opponent's, he will find it easier to raise small-dollar donations.

A conservative group could come in and spend heavily against Sand. But unfortunately for Hanusa, there's no equivalent to the Republican Governors Association or the Republican Attorneys General Association that focuses on electing GOP candidates for state auditor nationally.

No third-party candidate likely to file for this race.

Libertarians deeply dislike Hanusa for her role in pushing election law changes to disadvantage third parties in 2019. (The previous year, Hanusa was re-elected to the state House by only 114 votes; the Libertarian running in her district received 208 votes.)

Third-party candidates have occasionally been a factor in close Iowa elections. Republicans believe a Libertarian option hurts their nominees more than Democrats. So despite the Libertarian endorsements of Sand, the lack of a third option for state auditor could work in Hanusa's favor.

P.S.—I learned from Hanusa's website that she was president of "the Friends of the Union Pacific Railroad Museum, a community group in Council Bluffs tasked with raising funds to restore the city’s Carnegie library for use as a unique museum." My family visited that museum once; it's fantastic and I highly recommend a stop if you're in the area.