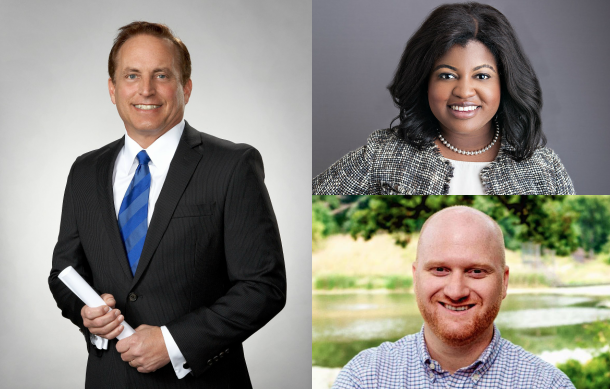 First look at fundraising for the Iowa secretary of state race

This year may be different, as Secretary of State Paul Pate's signature accomplishment--a law creating new barriers for eligible voters--generated tremendous controversy during and after the 2017 legislative session. Let America Vote, an organization former Missouri Secretary of State Jason Kander created to fight voter suppression laws across the country, has had a staffer on the ground in Des Moines for months. Kander wrote in a guest column for the Quad-City Times in October, "Secretary Pate and Republicans in the Iowa legislature injected intense partisanship into the administration of elections. [...] Their actions were wrong, which is why Let America Vote is opening an office in Iowa to make them answer for their bad choices."

Two Democrats are competing for the chance to face Pate in November: Jim Mowrer and Deidre DeJear. Pate won by just 20,073 votes out of more than a million cast in the 2014 Republican landslide. Signs now point to strong Democratic mobilization in Iowa and nationally. So while Iowans tend to re-elect their incumbents, the electorate for this midterm could be less favorably structured for Pate than the 2014 voter universe, where Republicans had substantially higher turnout than Democrats.

Assuming both major-party nominees have the resources to get their messages out, the secretary of state race should be a close one. New disclosures on candidates' 2017 fundraising and expenditures provide the first snapshot of each contender's ability to run a statewide campaign.

In other words, the incumbent's campaign would be flat broke if Pate were unable to float large loans. The money others contributed in 2017 would not come close to covering the costs associated with running for re-election. That Pate borrowed another $200,000 from himself indicates that he can put in more money if need be.

One reason the incumbent can afford to self-fund: unlike his predecessors, he doesn't rely primarily on his salary as a government official ($103,212.00 during fiscal year 2017). He continues to run his family's asphalt business in eastern Iowa while supposedly working full-time as secretary of state. I say "supposedly" because Pate seems to be out of the office a lot. Ryan Foley reported for the Associated Press in September that Pate "has been absent for 20 of 76 meetings of the Executive Council during his nearly three-year tenure and that he called in to meetings 21 times." Other members of that committee missed far fewer meetings during the same period and "rarely participate by telephone."

I was surprised when Iowa's chief elections officer missed an October public hearing on administrative rules drafted to implement the new voter ID law, one of his top policy priorities. On that day, in an apparent effort to create the impression that he was out of town, Pate posted on his official social media accounts a photo of himself attending a meeting on cybersecurity in Atlanta, Georgia. However, that event had taken place two days earlier.

I could not determine when Pate returned from that trip. His staff did not answer the question, and my request for expense reports for the secretary's travel around that time turned up no responsive records. Communications director Kevin Hall did not explain whether Pate was in Des Moines or Cedar Rapids (where his asphalt business is headquartered) on October 16, as his subordinates listened to public questions and concerns about the voter ID administrative rules.

MOWRER RAISED THE MOST MONEY

Challengers rarely out-raise incumbents the year before an election. But Mowrer is a more experienced fundraiser than most Iowans seeking statewide office for the first time. He raised more than $2.1 million during the 2014 election cycle, when he challenged Representative Steve King in Iowa's fourth Congressional district. He then raised more than $1.9 million during the 2016 cycle while running for Congress in the third district against Representative David Young.

But it's a lot harder to convince people to give to a secretary of state campaign than to a Congressional candidate. Though Pate is widely disliked in Iowa Democratic circles, he's not a nationally known villain like King. Nor is this race targeted by national groups the way IA-03 was as a battleground U.S. House race two years ago.

In roughly five months as a secretary of state candidate, Mowrer raised $86,593.00 in cash contributions and $19,104.00 by selling his campaign's e-mail list to presidential candidate John Delaney and Victor Swanson, a Congressional candidate in Illinois. Most of the donations came from individuals, but four contributions totaling $10,000 came from "Mowrer for Iowa," which may be leftover funds from his last Congressional campaign. The largest individual donors were Lewis Weinberg, Richard Deming, and Donald Sussman, who gave $2,500 each. John Delaney gave $2,000, and nine others gave Mowrer $1,000.

DEJEAR NOT FAR BACK IN CASH ON HAND

DeJear has worked on a number of campaigns but has never run for office before now. Since August, she raised $48,092.32--a solid amount for a first-time candidate and nearly double Pate's haul. Keep in mind that the incumbent has been in political life for decades.

Almost all of DeJear's contributions came from individuals, including many gifts in the $1 to $2 range. The largest individual donor was Bob Riley, who gave $2,000. The candidate's husband Marvin DeJear gave $1,500, and six others gave $1,000 each. The only donation from an organization was $1,000 from Iowa Women for Progressive Change.

Nothing jumped out on DeJear's reported expenditures of $12,197.80. The candidate covered numerous small campaign expenses herself, which she reported as in-kind donations totaling $4,603.62.

Although DeJear raised substantially less than Mowrer did, her low burn rate allowed her to stay close in cash on hand: $35,894.52 as of December 31.

Both Democrats will need to run low-budget campaigns before the June 5 primary, unless they step up their fundraising quite a bit in the next few months. At they current rate, they could pay for digital advertising and some mail or targeted radio, but probably no television.

Those conditions favor Mowrer, who has higher name recognition thanks to his previous campaigns. A November poll by 20/20 Insight, commissioned by Iowa Starting Line, found that "27% of likely Democratic primary-goers picked Mowrer in the race, compared to 9% for Des Moines small businesswoman Deidre DeJear. When voters were asked if they were leaning toward a candidate, the result was 30% for Mowrer and 12% for DeJear." Mowrer was far better known in the Des Moines media market, where he ran lots of tv ads in 2014 and 2016, than in Cedar Rapids or the Quad Cities, where he didn't purchase advertising as a Congressional candidate.

After the primary, more donors are likely to support the Democratic nominee, and as mentioned above, Let America Vote intends to help defeat the secretary of state. Nevertheless, the Democratic challenger may be at a financial disadvantage compared to Pate, who can write large checks if necessary.

Any relevant comments are welcome in this thread. To learn more about the candidates:

Top images: Secretary of State Paul Pate on the left, Deidre DeJear on the upper right, Jim Mowrer on the lower right.