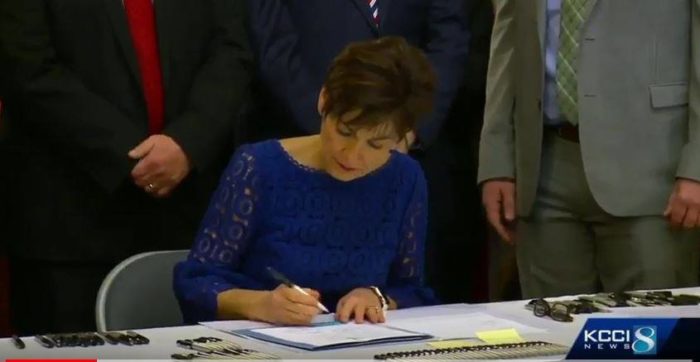 Matt Chapman had a "visceral reaction" to the governor's campaign ad about mental health. -promoted by desmoinesdem

If you watch Jeopardy! or the local news, you have been seeing a lot of campaign commercials for Governor Kim Reynolds. The first three were biographical in content, and the latest attacks Fred Hubbell over his leadership of the Younkers department store chain. (Iowa Starting Line pointed out that ad featured local GOP activists posing as people affected by store closures.)

"Rita" (identified as "mental health advocate for over two decades in Iowa"): I believe this bill will improve people's lives. When Iowans are in a crisis, we can reach out and find the help that we need. This is critical, this is one of the things that was missing before. Kim Reynolds has made mental health a priority. She listened to the experts and worked with both parties. That's what leaders are supposed to do.

I had a visceral reaction to the claim that "in a crisis, we can reach out and find the help that we need," which is "critical" and "one of the things that was missing before."

The ad has no data about accessibility to services, or about the number of Iowans who need treatment but are not receiving it, or about why we rank 49th in the country on in-patient mental health facilities.

That's because such data would show the Branstad/Reynolds administration's policies helped put us here.

“Gov. Terry Branstad vetoed a bill last July aiming to restore services at hospitals in Clarinda and Mount Pleasant. According to a new study by the Treatment Advocacy Center, Iowa now ranks 49th in the country with just 64 state mental hospital beds.”

In 2015, the legislature approved Senate File 505, an appropriations bill containing language to re-open the Clarinda and Mount Pleasant facilities that the Branstad/Reynolds administration closed previously. Branstad item vetoed that provision, leaving many vulnerable Iowans to fend for themselves.

Around the same time as the item veto, the administration shut down fifteen psychiatric beds for children at the state’s mental health institute in Independence. While officials claimed there was no need for the beds, the truth was the facility had been told to refuse admitting any patients months earlier.

In 2014, the Branstad/Reynolds administration shut down the Clarinda and Mount Pleasant facilities.

In 2013, the Branstad/Reynolds administration closed the Iowa Juvenile Home for girls in Toledo.

That is a clear path to how we ended up as next to last in the nation for mental health. As the lieutenant governor, Reynolds never said a word against Branstad’s unilateral closing of six facilities. The closures were devastating for many suffering Iowans and their families.

The bill signing pictured in the Reynolds ad glosses over the administration's item veto two years earlier, leaving some of Iowa’s most vulnerable citizens without any recourse.

Many groups lobbied this year for something to be done on mental health. But what really made a difference were the family members who went to the capitol and shared the heartbreak of their losses, some of which could have been prevented if Branstad had taken a different approach to the issue.

That is where my visceral reaction came from: Reynolds had the hubris to claim to be a champion of the vulnerable. The reality is that mental health accessibility in Iowa has diminished over the years, due to policies she embraced.

Scarcity of mental health services has contributed to countless tragedies in our state. To Iowans who live with mental illness or their loved ones, whose suffering was compounded due to the administration's actions, this gaslighting is despicable.