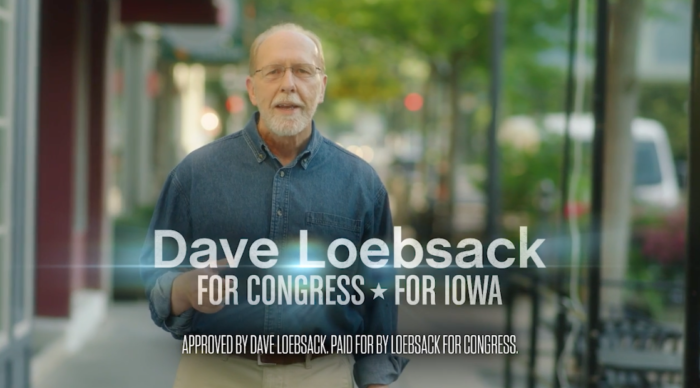 Six-term U.S. Representative Dave Loebsack will spend more than a million dollars over the next seven weeks running television commercials for a race not seen as competitive by any election forecaster or political advocacy group.

Meanwhile, his campaign has contributed just $125,000 to the Iowa Democratic Party's coordinated effort to boost candidates running for all state and federal offices.

What's wrong with this picture?

Our state's only remaining Democrat in Congress survived a couple of close calls in the 2010 and 2014 Republican landslides, but his career is not realistically threatened by the GOP, Libertarian, or independent challengers on the ballot this year. The 24 counties Loebsack represents in southeast Iowa contain about 23,000 more registered Democrats than Republicans, according to the latest official figures.

Republican candidate Christopher Peters released an internal poll on September 18 suggesting he is within striking distance; key findings are at the end of this post. However, he doesn't appear to have the resources to raise his name ID. Loebsack's campaign had nearly $2 million cash on hand as of June 30. Peters reported less than $30,000 cash on hand.

The Cook Political Report, Sabato's Crystal Ball, Inside Elections with Nathan Gonzales/Roll Call, and FiveThirtyEight.com all rate IA-02 as safe or solid Democratic. FiveThirtyEight's latest forecast gives Loebsack a 79 in 80 chance of winning.

Neither Democratic nor Republican political insiders consider IA-02 among the dozens of House seats in play. The National Republican Congressional Committee has left Loebsack alone since spending nearly $850,000 trying to take him out in 2012 and more than $1 million against him in 2014. The only reported outside spending in IA-02 during the last election cycle was $20 (yes, twenty dollars) by the Sierra Club's PAC in support of Loebsack. That PAC has spent $10 on his behalf so far this year.

Iowa City – Dave Loebsack has led efforts to reform a Washington that is out of control. "Little Guys," highlights two of those initiatives in an ad reaching voters district-wide starting Tuesday: working to cut the pay of a Congress that fails to address the needs of Iowa families; and seeking a permanent, lifetime ban on members of Congress from cashing out with special interests and becoming lobbyists.

With so many Iowans struggling day-to-day, Loebsack -- himself raised in poverty by a working mother -- is working hard to level the playing field. "It's about what best for the people" he says in the ad, which can be viewed HERE.

The ad is the beginning of a million-plus dollar reservation that will run through Election Day.

Federal Election Commission filings confirm that Loebsack's campaign spent more than $100,000 per week on media after launching television commercials in 2014 and 2016. So a seven-week district-wide buy would cost about a million dollars.

There's nothing wrong with the incumbent's opening commercial in terms of message or production values (scroll down to view the video). But it's wasteful for a politician in a safe seat to spend that kind of money on advertising when so much is on the line for Democrats this November.

Loebsack has fully paid his $125,000 contribution to the Iowa Democratic Party's GOTV effort, campaign manager Zachary Meunier told me by phone on September 17. State party officials did not respond to a request for comment on whether anyone had asked Loebsack to give more than that amount to what is now called the "campaign for Iowa."

Three of the last four elections have been Republican waves. About 56.7 percent of registered Iowa Democrats cast ballots in the 2014 general election, compared to 68.2 percent of Republicans. GOP turnout far outpaced Democratic turnout here in 2010 as well, 69.0 percent to 56.5 percent. Democrats cannot win a statewide election under those conditions, making outreach to non-reliable voters critically important this year.

A wide-ranging law Republicans enacted in 2017 also underscores the need for better voter education. For the first time, all general election-day voters in Iowa will be asked to show ID. In addition, the straight-ticket option previously used by about a third of Iowans will no longer appear near the top of the ballot. No one knows how those changes will play out. Democrats cannot afford large numbers of voters to be turned away from the polls, or to leave ballot lines for down-ticket offices blank for lack of knowledge about the candidates.

To call the current election "the most important of our lifetimes" has become a cliche, but it feels true for Iowa Democrats for one other reason. If Governor Kim Reynolds is elected and the GOP retains control of both chambers of the state legislature, I anticipate a push to bring back gerrymandering. I have been unable to get Reynolds, House Speaker Linda Upmeyer, or Senate Majority Leader Jack Whitver on record promising not to tamper with our widely-praised redistricting system.

GOP politicians have gerrymandered in every state where they had the trifecta during the last two decades. I don't expect Iowa to be an exception, because a non-partisan map following the 2020 census would likely force a number of GOP incumbents to run against each other. About 90 of Iowa's 99 counties are losing population, including most of the areas represented by Republican lawmakers. A new redistricting system could relegate Democrats to minority status for decades.

After I published this post last week, several readers suggested that even if neutral observers see Loebsack's seat as safe, he doesn't feel secure about his re-election prospects. Maybe that explains the overkill ad buy. I would counter, how does Loebsack fancy running for Congress in 2022 under a new map drawn by Republicans? It could happen if Fred Hubbell loses the governor's race and Democrats fall short in the state House and Senate.

Loebsack has ample funds available to put $500,000 or more toward boosting Democrats up and down the ballot, even if he insists on using the bulk of his campaign cash to pad the bottom lines of local television stations.

UPDATE: According to Christopher Taylor, last weekend the Iowa Democratic Party's district committee in IA-02 voted to give Loebsack's campaign a second $5,000 contribution, "bringing the total to $10K this year. Then we moved on to the item concerning what we could do *non-financially* for state legislative races because the 2nd CD didn't have any more money for campaign contributions. Total 2nd CD donations to persons not named Dave Loebsack: $0." At least two highly competitive Iowa Senate races are happening in southeast Iowa (Senate districts 41 ad 49). Battleground House races within Loebsack's district include House districts 28, 91 and possibly 92 and 94.

“In the horse race, Loebsack leads Peters by 6 points (43%-37%) with two minor third party candidates included and by 8 points (46%-38%) in a 2-way race between just Loebsack and Peters,” says the executive summary released by Gravis. “The poll goes on to test messaging on both candidates. After these messaging tests, Loebsack and Peters are tied at 39% in a 4-way race and Peters moves to a 43%-41% lead in a head to head match up.”

“These results validate what we’ve believed for a long time,” said Dr. Peters. “Iowans are ready for new representation in Congress. We can’t get complacent with a 2% lead, but it definitely gives us a sense of optimism moving forward.”

Note: The "2 percent lead" frame is misleading. Those results came on the ballot test after respondents heard a series of positive statements about Peters and negative ones about Loebsack. Peters will be hard-pressed to get those messages out to large numbers of IA-02 voters. Besides, Loebsack survived an onslaught of Republican-funded attack ads in 2012 and 2014.