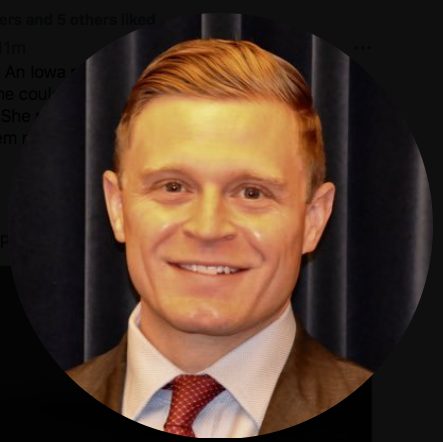 Governor Kim Reynolds announced on February 1 that she had selected Michael Bousselot to serve as director of the Iowa Department of Management, effective February 8. That agency handles state budget planning as well as disbursements from Iowa's general fund and various other funds, such as the Coronavirus Relief Fund and other federal money flows related to the COVID-19 pandemic.

Bousselot became Branstad's legal counsel in early 2015 but held that position for only six months before being promoted to chief of staff. He continued in that role until June 2017, shortly after Reynolds became governor. He landed a job as managing director with Bruce Rastetter's company Summit Agricultural Group, but left that position after less than a year to work for a captive insurance company in the Des Moines suburbs. His LinkedIn profile indicates that he joined the Faegre Drinker law firm in December 2020.

Outside government, Bousselot's work has largely been devoted to lobbying and networking. Rastetter's company hired him to work on "relationship development with both current and potential stakeholders and the growth of Summit Ag investment initiatives in the United States and Brazil.” Part of that job involved planning the Iowa Ag Summit, which brought together political and agri-business leaders.

At Innovative Captive Strategies, a bio notes, Bousselot "developed a corporate advocacy strategy for favorable tax regulation with the Trump administration, Congress and state officials interfacing with the U.S. Department of Treasury" while working with Reynolds and the governor of Texas "on economic development and state policy matters impacting his stakeholders."

According to the Faegre Drinker website, Bousselot "partners with clients to advance their interests through government relations strategies and advocacy at the state and federal level."

Although Bousselot has worked in state government for part of his career--which is more than can be said for Reynolds' recent nominee to lead the Iowa Department of Administrative Services--I'm not seeing the kind of background that would make someone a good fit to run the Department of Management. That agency oversees billions of dollars in state and federal expenditures in Iowa. It's imperative for the director not to be focused on advancing any private company's interests.

In a news release enclosed below, Bousselot promised to "protect Iowa taxpayers" while staying committed to Reynolds' "mission of fiscal responsibility."

That stated mission doesn't extend to living within the governor's budget appropriation. As Bleeding Heartland reported in December, the governor's office overspent its fiscal year 2020 budget by nearly $900,000. To make up about half of that shortfall, Reynolds designated federal COVID-19 relief funds to cover $448,449 in salaries and benefits for 21 of her permanent staffers. The money ran through the Iowa Department of Homeland Security and Emergency Management, whose staff worked with Department of Management personnel to craft documents showing the allocation covered "necessary expenditures" incurred due to the coronavirus pandemic.

Last month, Reynolds appointed her former chief operating officer Paul Trombino as director of Homeland Security. What are the chances that either Trombino or Bousselot would advise the governor against using more CARES Act money for permanent staff salaries or some other questionable project, such as the Workday computer system?

Bousselot will be subject to Iowa Senate confirmation. CORRECTION: Trombino doesn't need to be confirmed. To obtain the necessary two-thirds majority vote, the Department of Management director will need support from at least two Democratic senators as well as all 32 Republicans in the chamber.

Gov. Reynolds appoints Michael Bousselot to be the new director of the Department of Management

DES MOINES - Today Governor Kim Reynolds announced the appointment of Michael Bousselot to be the new director at the Iowa Department of Management. Bousselot’s appointment is effective Monday, February 8th, 2021. His appointment is subject to Senate confirmation.

“Iowa has a strong legacy of fiscal responsibility, living within our means, and looking for ways to return money to hardworking taxpayers,” said Gov. Reynolds. “Michael understands the role the Department of Management plays in ensuring state government acts as good stewards of taxpayer dollars. I am excited to have him back working in my administration in such an important role.”

"Governor Reynolds wants to think bigger and be bolder for Iowans and I am honored to help in any way I can," said Michael Bousselot. "I am committed to her mission of fiscal responsibility and working to protect Iowa taxpayers. I believe my experience in state government and within the governor’s office will provide valuable insight and expertise to the team.”

Michael Bousselot previously served as chief of staff, legal counsel, and as a policy advisor in the Branstad – Reynolds administration. A Davenport native, Bousselot graduated from the University of Iowa with an undergraduate and graduate degrees in accounting and with a law degree from Drake University Law School. Bousselot joins Gov. Reynolds administration from the law firm Faegre Drinker Biddle & Reath.

Michael Bousselot partners with clients to advance their interests through government relations strategies and advocacy at the state and federal level. Michael served as chief of staff for Iowa Governor Terry Branstad from 2015 to 2017, during which he was tasked with managing the forces that drive government operations and decision-making — and leading the processes required to bring policy agendas to fruition. Michael subsequently drove government affairs and public policy advocacy efforts in leadership roles at an Iowa-based agribusiness investment group and a captive insurance company. Michael draws on this extensive experience at the intersection of business and government to give clients a voice in legislative, regulatory, and policy-making institutions and processes.

From 2011 to 2017, Michael served as public policy adviser, legal counsel and, ultimately, chief of staff in the office of Governor Branstad. As chief of staff, Michael managed a $2.7 million office budget and a $7.4 billion state budget while leading a staff of 44 department directors and a 17,500-person executive branch. He developed and implemented policy and political strategies, including budgets, legislative initiatives, and administrative rules.

In these roles, Michael led the execution of the Branstad administration agenda on a number of issues and initiatives, including:

Prior to joining Faegre Drinker, Michael served as assistant vice president at Innovative Captive Strategies, leading advocacy efforts at the state and federal level derived from an enterprise-wide view of property and casualty insurance and health care insurance. In this role, he developed a corporate advocacy strategy for favorable tax regulation with the Trump administration, Congress and state officials interfacing with the U.S. Department of Treasury. He also worked directly with Iowa Governor Kimberly Reynolds and Texas Governor Greg Abbott on economic development and state policy matters impacting his stakeholders.

Michael also served as managing director and head of external relations for Summit Agricultural Group, an agribusiness investment group, where he led business development, public policy and investor relations initiatives. In this role, he planned and delivered the Iowa Ag Summit in Des Moines, which convened the U.S. Secretary of Agriculture, U.S. senators and other policy leaders to discuss agricultural topics related to investor opportunities.