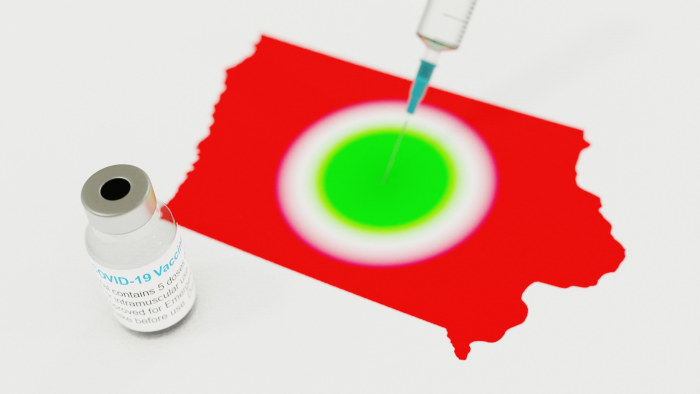 Racial disparities in Iowa's COVID-19 vaccinations have narrowed during the eight weeks since all adults became eligible to get a shot. However, even with many vaccination sites now accepting walk-ins, reducing barriers associated with online scheduling, people of color and especially Black and Latino Iowans have received fewer doses per capita than white people.

In addition, county-level data show a wide gap between the Iowa counties with the highest and lowest vaccination rates. As in most other states, vaccination rates appear to be correlated with political and demographic features. Residents of more urban and more Democratic counties are more likely to be vaccinated than those living in rural and heavily Republican areas.

Governor Kim Reynolds declared at a news conference on May 12,

"There's no reason for us to continue to fear COVID-19 any longer. [...] We know how to manage it, and that individuals can be trusted to make decisions that will keep us on a path forward. I believe that Iowans are ready to live our lives normally again, and I think we've earned it."

Iowa's new cases have trended downward this spring, and coronavirus hospitalizations are now at their lowest point since March 2020. But experts have warned against complacency before reaching herd immunity thresholds. About 44 percent of Iowans are fully vaccinated for COVID-19, according to CDC data as of May 30; state data shows a slightly lower level. Some unknown number may have acquired immunity from previous infection, but researchers don't know how long that protection lasts. There have been documented cases of reinfection.

Unvaccinated people are still at risk of serious illness and death. Dan Keating and Leslie Shapiro recently reported in the Washington Post. "The country’s declining covid-19 case rates present an unrealistically optimistic perspective for half of the nation — the half that is still not vaccinated." Their analysis highlighted data from Washington state, showing the "case rate among unvaccinated people is as high as it was in late January, near the peak of Covid infections." (emphasis in original)

Unvaccinated people are not distributed evenly throughout the population. Some areas have higher concentrations, due to barriers to access, greater distrust of the vaccines, or a combination of factors. Keating and Shapiro noted,

lower vaccination rates in the Black community have concentrated cases there to an extraordinary degree. Before vaccines, Black people were about one third of new covid-19 patients in Maryland and half in D.C.. In the latest data, Black people are just under half of the new cases in Maryland and more than 80 percent in DC.

Dr. Celine Gounder, an infectious disease specialist and epidemiologist at New York University, commented on the worsening inequities, "We're seeing COVID concentrate in vulnerable populations, just as we have with other infectious diseases like HIV. And once that happens, the mainstream media stops paying attention, and we all forget."

Iowa's official COVID-19 website provides vaccination data by county and for various age bands and racial or ethnic groups. As of May 30, that site shows white people have received about 80.2 percent of total doses administered, and Iowans with no Latino ethnicity have received about 78.4 percent of vaccine doses, nearly unchanged from the percentages in early March and early April. The latest graphic available on the state site: 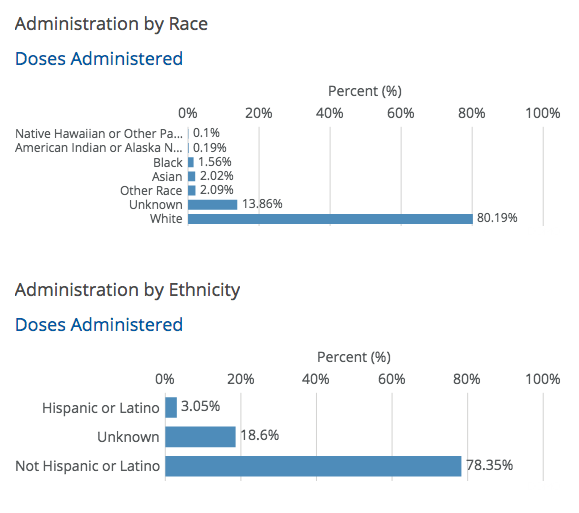 The state does not provide data on doses per capita, which are a better measure of potential disparities than absolute numbers of vaccine doses administered. Fortunately, Sara Anne Willette continues to chart these statistics daily at her Iowa COVID-19 Tracker website.

According to Willette's calculations using data from May 30,

Willette has recently begun calculating COVID-19 vaccine series completion data as well. Fully vaccinated individuals have received either two doses of a Pfizer or Moderna vaccine or a single dose of Johnson & Johnson. As of May 30, about 385 out of every 1,000 white Iowans was fully vaccinated. The corresponding number is 160 for Black Iowans, 331 for those of Asian descent, 192 for Native Americans or Alaska natives, and 245 for Iowans of unknown race. About 179 out of every 1,000 Latino Iowans is fully vaccinated, compared to 364 out of every 1,000 people with no Latino ethnicity.

Outreach to vulnerable populations, including communities of color, has somewhat reduced the disparities observed in early March. Nick Coltrain and Tim Webber reported recently for the Des Moines Register on efforts in Polk County to schedule vaccinations for residents whose native language is not English, and to hold vaccination clinics in neighborhoods where people faced more barriers to access. Natalie Krebs of Iowa Public Radio covered the Meskwaki Nation's successful vaccination drive. As of May 4, officials estimated that "more than 70 percent of those eligible who live and work on the settlement [in Tama County] are fully vaccinated."

A state plan to target "frontline essential workers in food, agriculture, distribution, and manufacturing sectors" may be partly responsible for reducing disparities affecting Latinos, which have declined from about a three to one vaccination gap in early April to two to one now.

Nevertheless, people of color are not being vaccinated at nearly the same rate as white Iowans. The disparity is still more than two to one for Black Iowans. That's smaller than the previous gap but still enormous, especially when one considers that of the five counties where roughly two-thirds of Black Iowans live, only Scott County (containing the Quad Cities area) is below the statewide average vaccination rate. Black Hawk County (Waterloo/Cedar falls) is slightly above the statewide rate. Polk County (Des Moines area) and Linn County (Cedar Rapids metro) are doing better, and Johnson County (Iowa City) has the state's highest vaccination rate by far at nearly 54 percent.

Charles Gaba has been tracking state and county-level COVID-19 data at his ACA Signups website for months. Here's his most recent graph of Iowa's COVID-19 vaccination rates by county and partisan lean, based on May 29 data. If you click through, you'll find estimated vaccination rates and Donald Trump's share of the 2020 vote for each county. 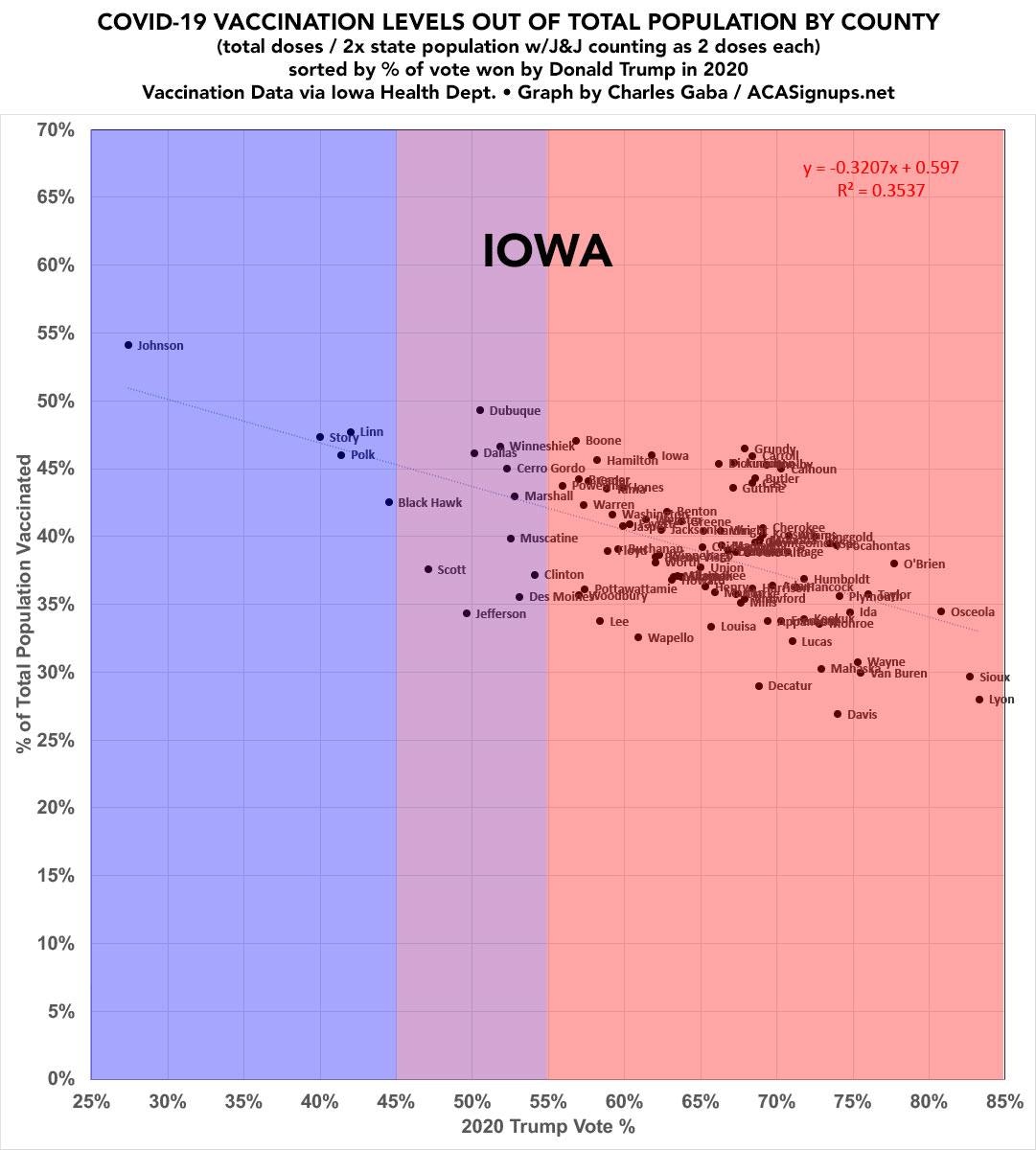 Most other states Gaba has graphed show a similar correlation, with redder counties having generally lower vaccination rates than blue areas. Correlation does not equal causation. Many factors contribute to vaccination rates, and some of those could be linked to voting patterns as well (e.g. poverty rates, percentage without health insurance, education levels).

Note also that there's a lot of variation in the vaccination rates for both red and blue counties in Iowa. Scott County is noticeably underperforming compared to the other blue counties, while several counties Trump carried are in the top tier for vaccinations (Dubuque, Boone, Winneshiek, Grundy, Carroll, and Iowa). A future post will examine what public health departments are doing in some of those counties.

All of the counties where Trump received more than 70 percent of the vote are below the statewide average for vaccinations. The ones at the bottom of the table with less than 30 percent of residents vaccinated include the most Republican counties (Sioux and Lyon). Davis County's extremely low rate (99th out of the 99 counties) may be influenced by the local Amish population, State Representative Jeff Shipley observed. Shipley's the loudest vaccine detractor in the Iowa legislature, and he celebrated the disdain for vaccinations in one of his House district's counties.

People living in communities with low vaccination rates will be at greater risk of becoming infected this summer, fall, and winter. While most of those cases will be mild, some will lead to hospitalizations, long-term health problems, or deaths.

Why should you care, if you've been vaccinated yourself? We should all want to avoid preventable deaths and life-altering "long COVID" cases.

If altruism isn't your thing, consider that while vaccines seem to work well against all coronavirus variants identified so far, other variants may emerge that resist the FDA-approved vaccines. So it's in everyone's interest to keep community transmission as low as possible. Vaccinations are a bigger part of that picture now that the governor has lifted all capacity restrictions and social distancing requirements, and many Iowans have thrown away their masks.

Final note: About once a week Gaba posts the 100 counties that have the highest per capita total case and death rates in the U.S. His latest post from May 27 shows that Buena Vista County (Storm Lake area) ranks twelfth nationally for total COVID-19 cases. Plymouth and Crawford counties are also in the top 100, at 82nd and 83rd place.

Three Iowa counties made the nation's top 100 in terms of total COVID-19 deaths per capita. All are rural and heavily Republican: Harrison (54th place), Ida (57th), and Ringgold (72nd).