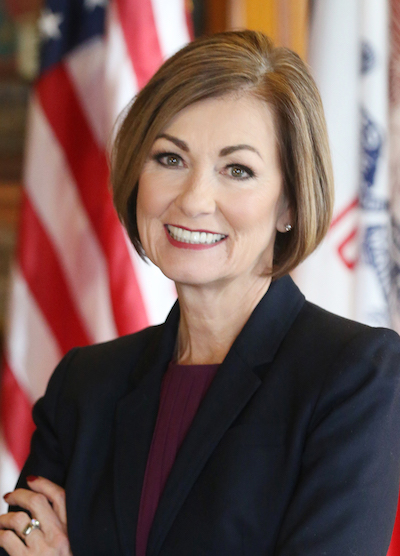 The State Auditor's office concluded in November and reaffirmed this month that Reynolds used $448,449 in CARES Act funds to pay part of the salaries and benefits of 21 permanent staffers between March and June 2020 in order to "cover a budget shortfall that was not a result of the pandemic." State Auditor Rob Sand called on Reynolds to return the money to Iowa's Coronavirus Relief Fund before the end of 2021. The governor's office has insisted its use of COVID-19 relief funds for staff salaries was justified.

Asked this week about the impasse between Reynolds and state auditors, Delmar confirmed via email, "We have requested documentation of the uses from the State Auditor’s Office and are in the process of reviewing it."

"THE BUDGET SHORTFALL WAS NOT A RESULT OF THE PANDEMIC"

Treasury's Office of Inspector General asked state auditors in January 2021 to look into the use of CARES Act funds to pay Reynolds' during the early months of the pandemic. As part of the State of Iowa's Single Audit Report issued in November 2021, auditors included a section about their efforts to determine whether sufficient documentation existed to support the governor's staff salaries as a qualifying expense.

The $448,449 transferred from the Coronavirus Relief Fund (using the Department of Homeland Security and Emergency Management as a pass-through) represented 62.59 percent of 21 employees’ compensation from mid-March through June 2020. The Single Audit Report noted that state auditors had twice asked for contemporaneous documentation (that is, "documentation existing at the time the expenses were incurred") to support the use of CARES Act funds but "has not received anything to date."

Documents from the Homeland Security agency, first published by Bleeding Heartland in December 2020, led auditors to conclude that "the $448,448.86 represents a budget shortfall and an overspending of the Governor’s appropriation," and that "the budget shortfall was not a result of the Pandemic."

The state auditors' Report of Recommendations to the Office of the Governor, released on March 1, again published those tables: 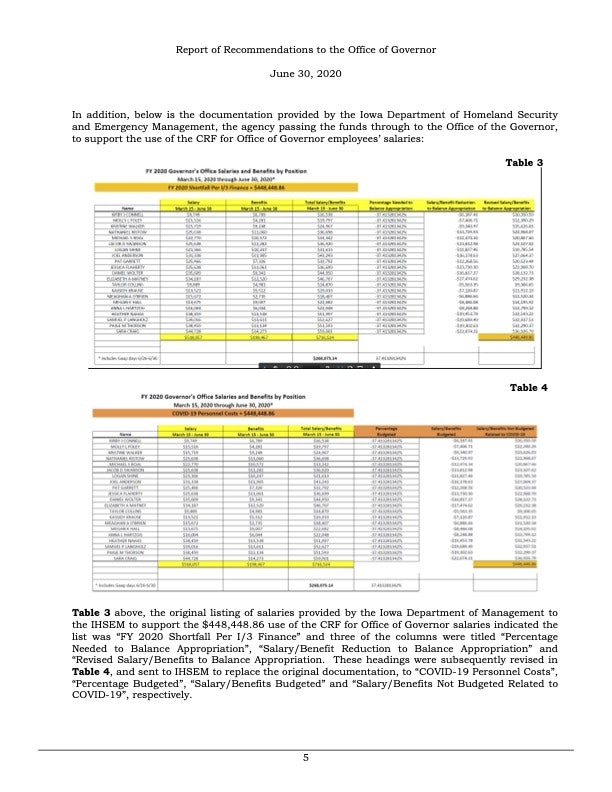 The records showed that staff at the Iowa Department of Management (the state’s budget agency) had calculated that $448,448.86 was the governor’s office “FY 2020 Shortfall Per I/3 Finance.” The governor's office had provided the names of 21 staffers who, they said, were predominantly working on pandemic-related matters. To balance the books, Department of Management staff calculated, CARES Act funds were needed to cover 62.59 percent of each staffer’s salaries and benefits from March 15 to June 30, 2020.

In an apparent effort to comply with Treasury guidance on COVID-19 relief funds, the table was revised to label the governor’s office fiscal year 2020 shortfall as “COVID-19 Personnel Costs,” and to rename “Revised Salary/Benefits to Balance Appropriation” as “Salary/Benefits Not Budgeted Related to COVID-19.”

State auditors' new report repeated conclusions reached last year: the governor "maintained more staff than their budget could afford," and her office was on track to overspend its budget prior to the pandemic. In addition, the governor's office had no policies and procedures to document the employees' work during the period or how they arrived at the 62.59 percent calculation. The effect was "an unsupported use" of $448,448.86 in federal funds.

The report recommended that the governor's office return the funds, adding that Treasury's Office of Inspector General "reviewed and concurred with this finding" on November 1, 2021. State auditors also wrote, "the Treasury OIG informed this Office they had met with representatives from the Office of the Governor and told them the same."

Staff for the governor told state auditors they would work directly with federal auditors "to ensure compliance with Treasury guidance on this issue." Reynolds assured reporters in November, "We feel very, very confident that we can provide the documentation that shows that we were working 100 percent of our time on COVID-19 because the projections were horrific."

Another agency sought to make the governor's case the following month.

The Report of Recommendations recounts how the Iowa Department of Management provided a 159-page packet to state auditors in December, in an attempt to support the use of CARES Act funds for governor's staff salaries.

After reviewing the information, Deputy State Auditor Marlys Gaston wrote in December to Reynolds' chief of staff Sara Craig Gongol, Department of Management interim Director Kraig Paulsen, and Deborah Harker, audit director for Treasury's Office of Inspector General. Gaston explained why the new records were not sufficient to make the $448,449 a qualifying expense under federal guidelines for CARES Act funds.

She raised other concerns as well. The Department of Management wrote to the Treasury Department last November asking, among other things, "What is the deadline to produce documentation to support employee time spent in responding to the emergency?" Treasury officials replied that such documents "need to be produced upon audit and within the audit timeframe." Gaston noted that Iowa Code requires "all audited or examined entities" to provide information "upon the request of the auditor of state."

Thus, even though this material does not make the expense qualifying, if you believed it possibly may have, it should have been produced upon first request. [...]

Based on the above items, and on the advanced notice of concern we provided to the Office of the Governor about these issues over a year ago, our recommendation remains that the funds should be returned to Iowa's CRF for other eligible and supported uses before the December 31, 2021 deadline.

The governor didn't return the funds. Asked about the latest state audit report, Reynolds' spokesperson Alex Murphy told Bleeding Heartland via email on March 2, "Other states have successfully used CRF for Governor's Office staff salaries." He pointed to page 13 of a report showing Minnesota's governor's office was reimbursed for a portion of payroll expenses in 2020.

However, the Minnesota governor formally requested permission to use CARES Act funds in that way, with supporting information in the summer of 2020. In contrast, Reynolds' office concealed the use of federal COVID-19 relief funds for staff salaries. Bleeding Heartland's reporting on the matter in September 2020 was the first public mention of that spending. And after the fact, the governor's office ran the $448,449 through the Homeland Security department. That indirect payment route, not used for any other state government entity, was an apparent effort to shield from public view the CARES Act spending on Reynolds' staff.

Murphy did not answer Bleeding Heartland's other questions about the state auditors' Report of Recommendations, such as:

As mentioned above, staff at Treasury's Office of Inspector General "are in the process of reviewing" the documents the Department of Management provided, related to the governor's use of COVID-19 relief funds for staff salaries.

Bleeding Heartland requested a copy of that 159-page packet from the State Auditor's office. Communications staffer Sonya Heitshusen explained that the documents were considered auditors' work papers not subject to Iowa's open records law. However, she said, the Department of Management may be able to provide the packet. That agency has acknowledged receipt of Bleeding Heartland's request for those records but has not yet provided them.

Final note: documents Bleeding Heartland received last year in response to records requests indicated that Reynolds did not use any federal COVID-19 relief funds to cover governor's office expenses during the 2021 fiscal year. Rather, other state agencies provided more funds than in previous years to make up for the governor exceeding her budget appropriation.