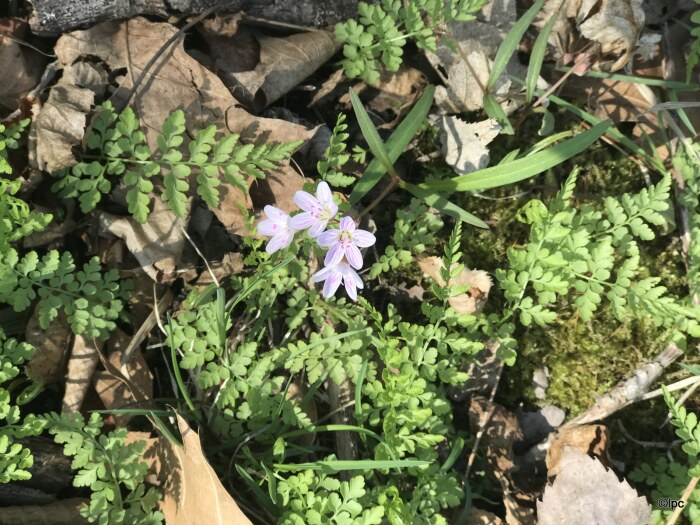 Cystopteris protrusa (formerly C. fragilis var. protrusa) is variously called Southern Fragile Fern, Creeping Fragile Fern, Lowland Brittle Fern, and Southern Bladder Fern, as well as just Fragile Fern which we will use here. It is a relatively easy fern to identify as it grows in early spring and grows in soil, not on rock ledges.

Once you have seen the structure of the frond, you are likely to recognize it in the future. It is found in oak and hickory woodlands, both high quality natural habitat and significantly degraded woodlands. It is widely distributed in Iowa as documented by this BONAP (Biota of North America Program) map dated 2014. 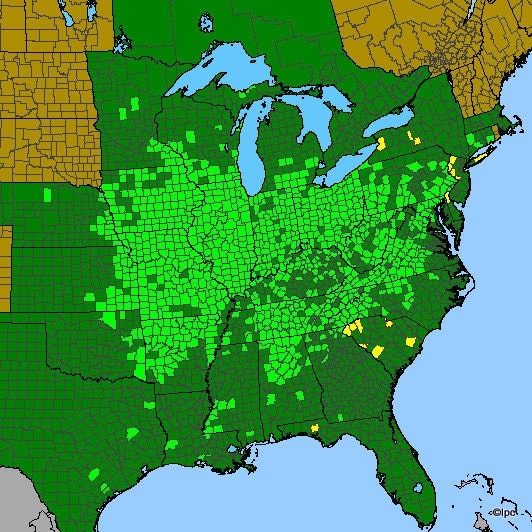 Perhaps like me, you have not focused on fern identification. If so, this is a good fern to study to begin to learn about ferns in Iowa.

Look for fragile fern when the snow is gone, the moss has begun to turn bright green and your thoughts turn to wildflowers to be. As soon as the first flowers bloom, we all become distracted by them. We may not notice that carpet of fragile delicate leaves that give a green background to our photos of early wild flowers.

Here are some of the ways we will see it here in Iowa—in this case Van Buren County, in April and early May. 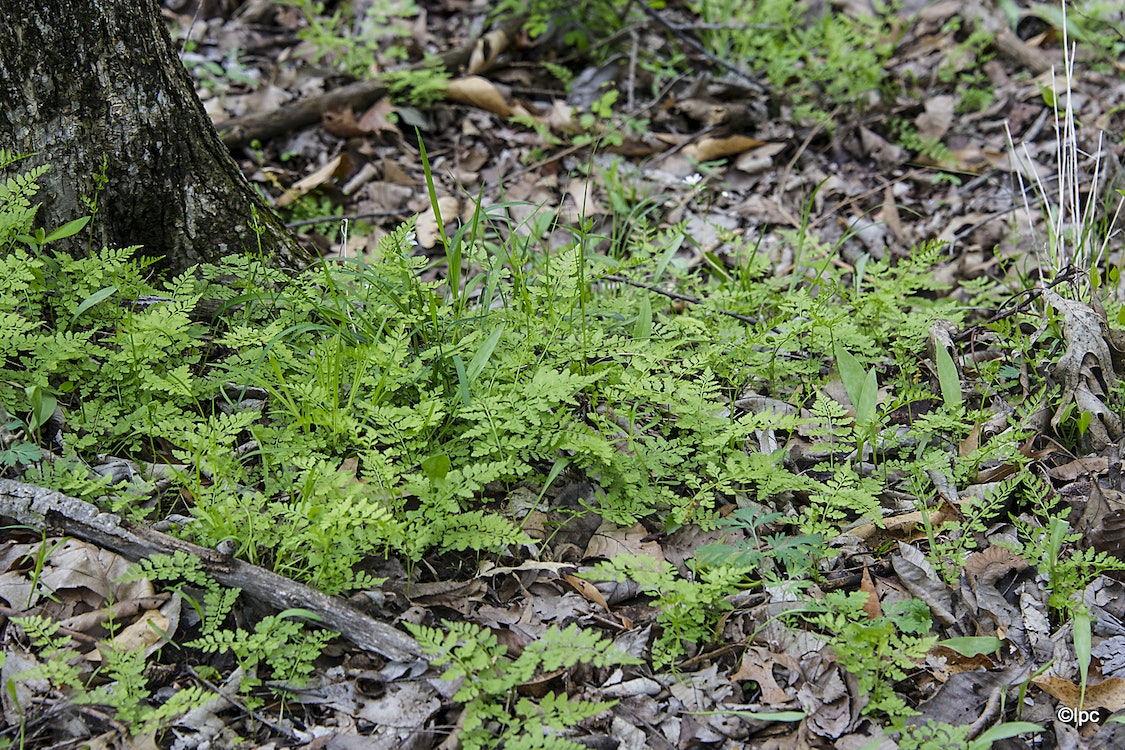 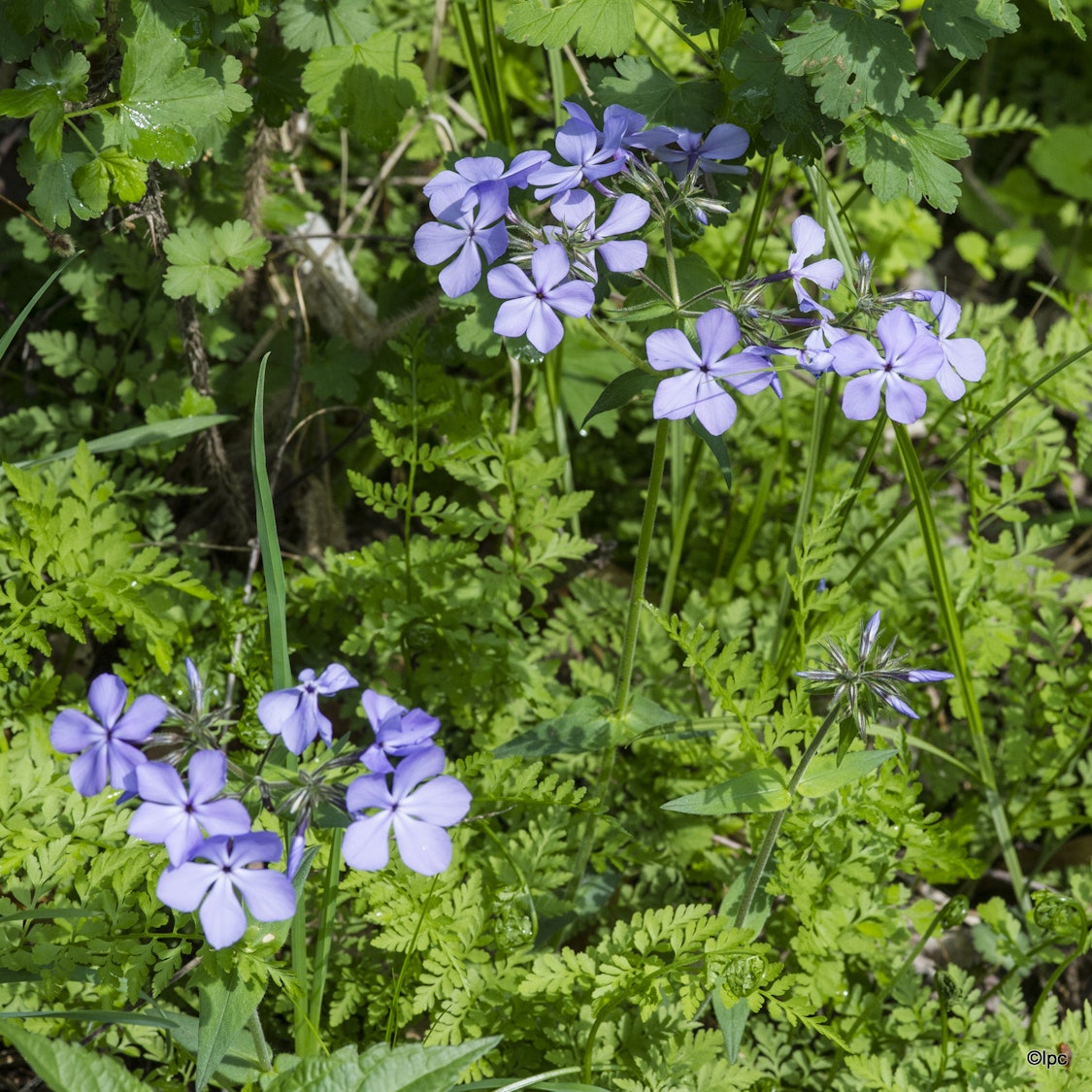 Then it's a supporting act for the common violets as they bloom. 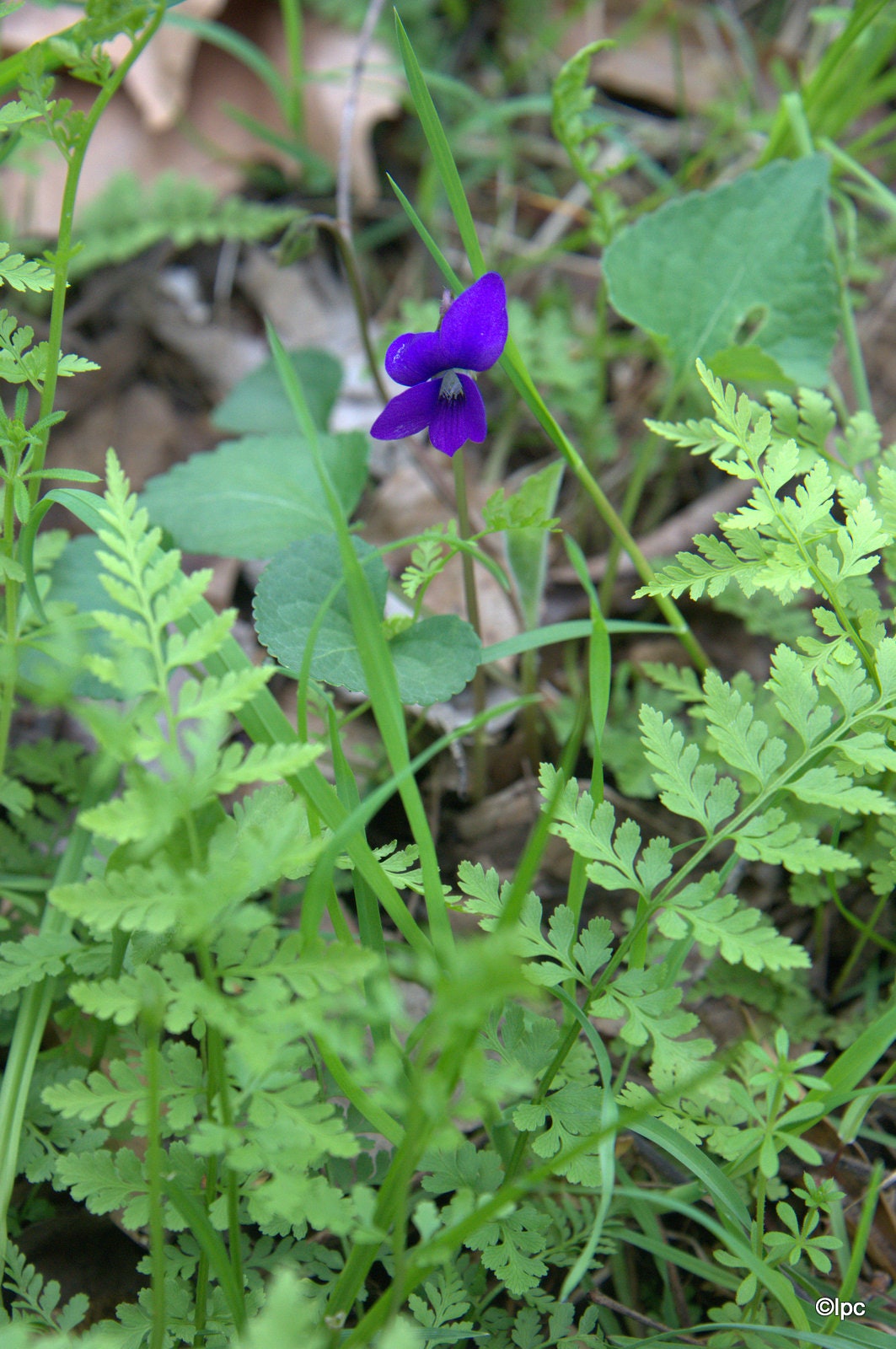 Still serving as the lovely green backdrop when the Dutchmen's breeches bloom. 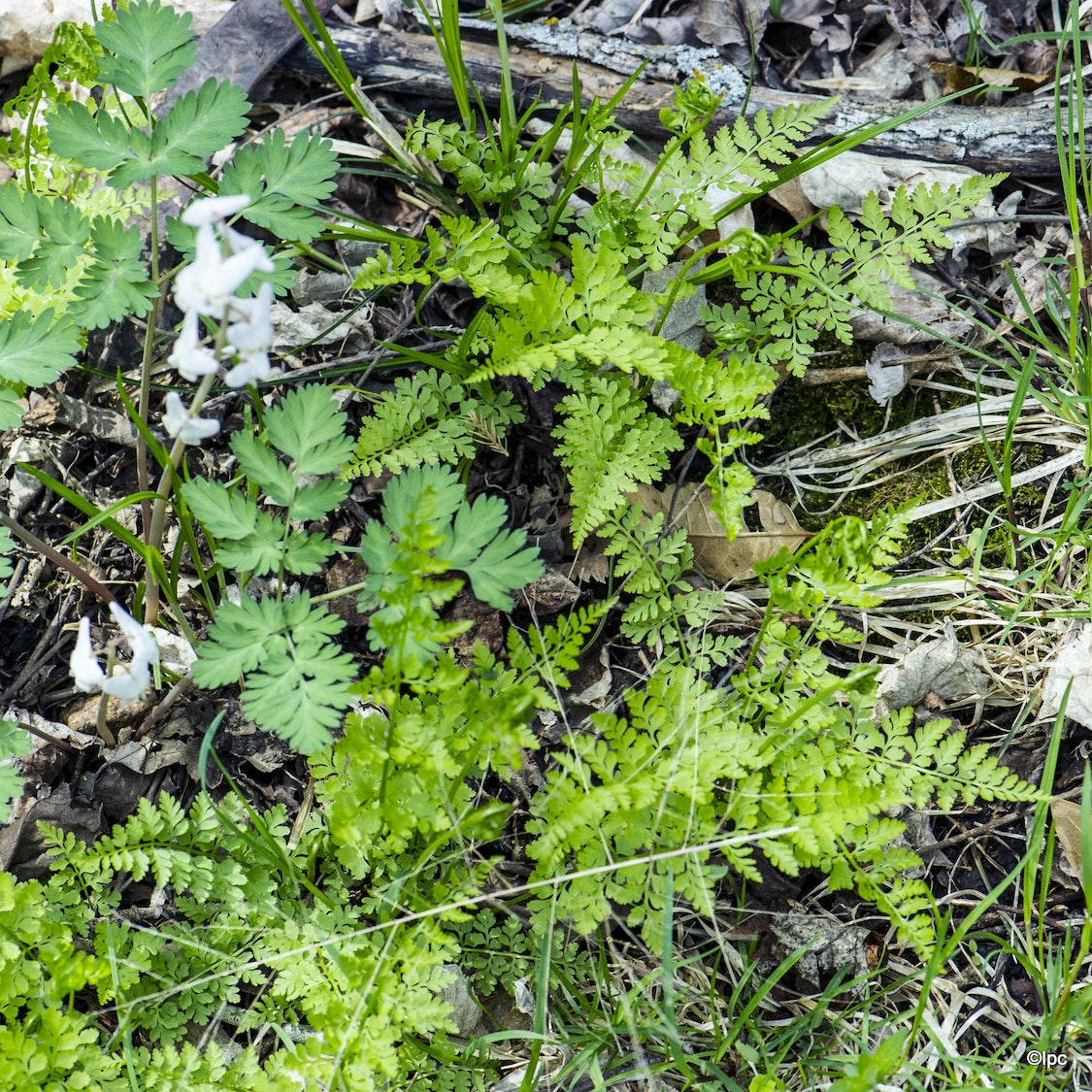 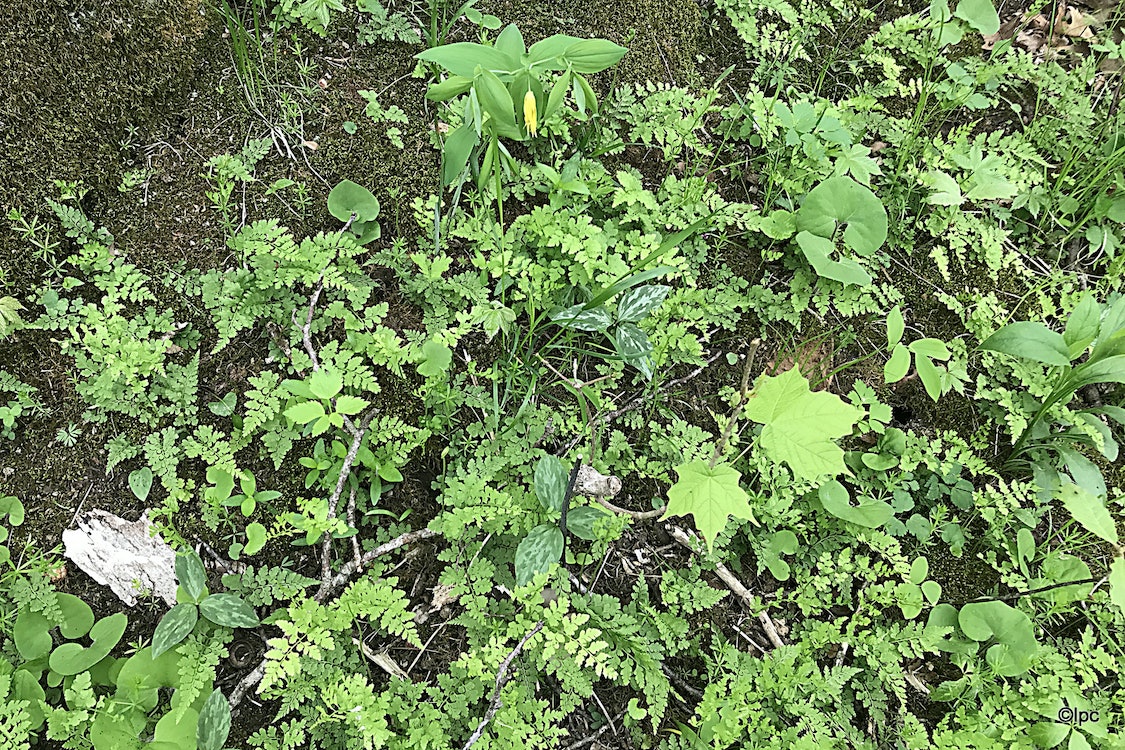 It can also hold its own against the invasive creeping charlie and garlic mustard. Shown here with creeping Charlie. 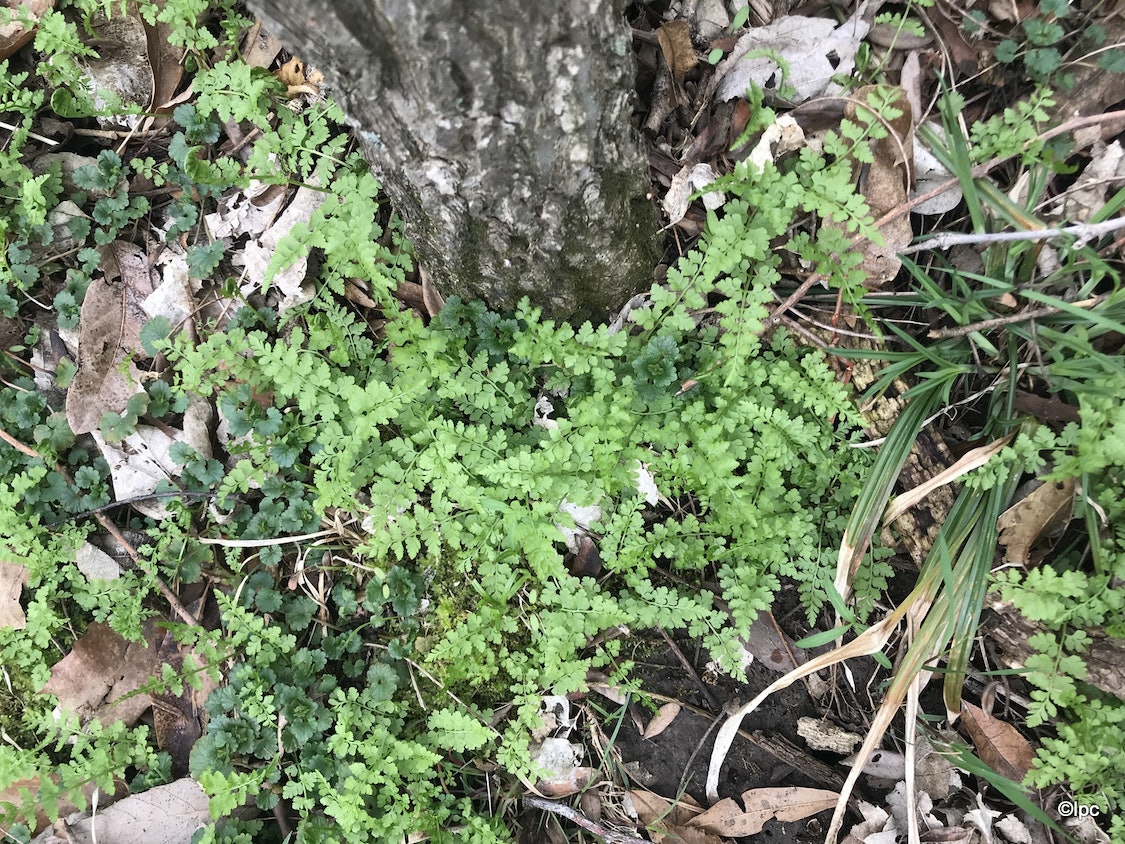 Characteristics and development of fragile fern

Now lets take a closer look at the fern itself, which so often goes unnoticed among the more eye catching flowers. Here are several close views of unfurling fiddleheads of fragile fern. 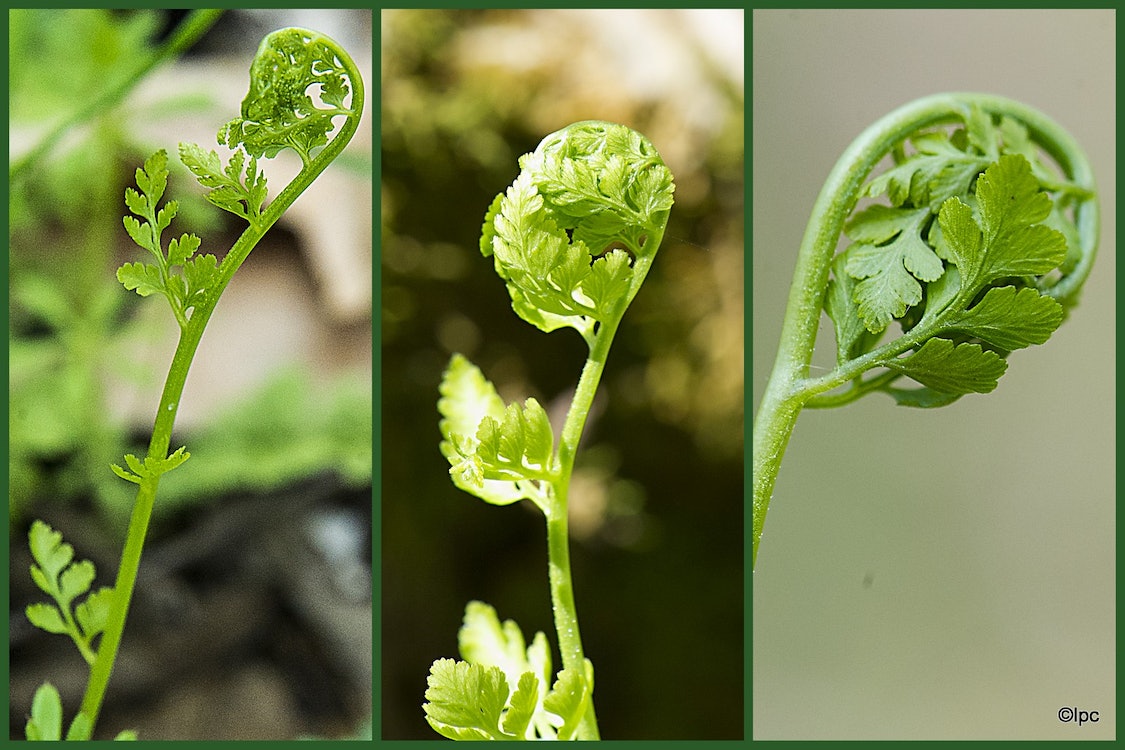 The Missouri Botanical Garden gives this excellent brief description of the fern and how it got some of its names:

Genus name comes from the Greek words kystis meaning a bladder and pteris a fern.

Here is a view of the fragile fern fronds without the distraction of other plants. Early to mid-April, there are only small fragile ferns covering the woodland floor. So early that even the moss has not yet turned green. It clearly grows in soil, not on rock. 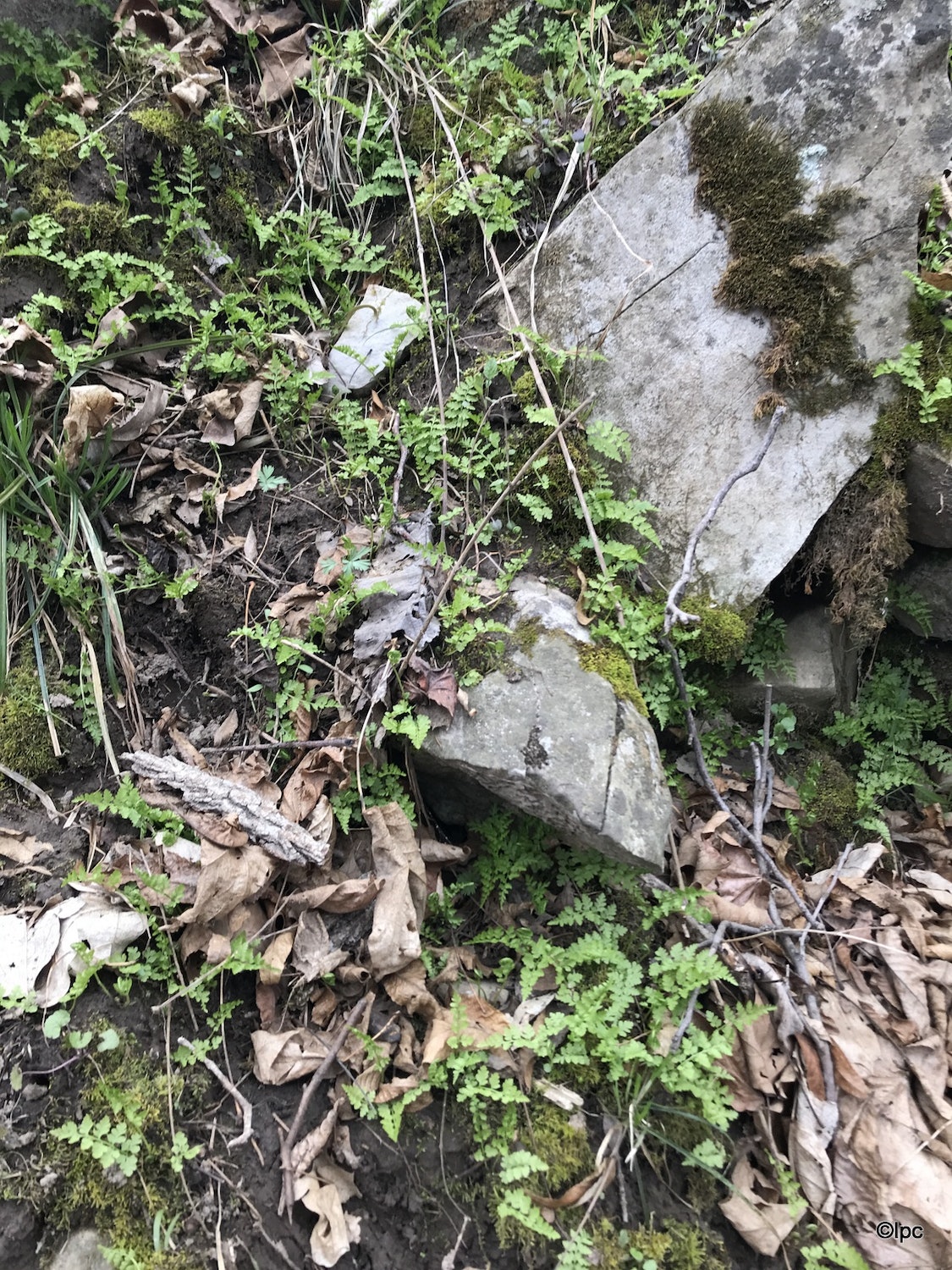 A little later in April, when the moss has turned green nearby, the fragile fern is standing 6 to 8 inches tall and beginning to serve as the background greenery for the coming wildflowers. 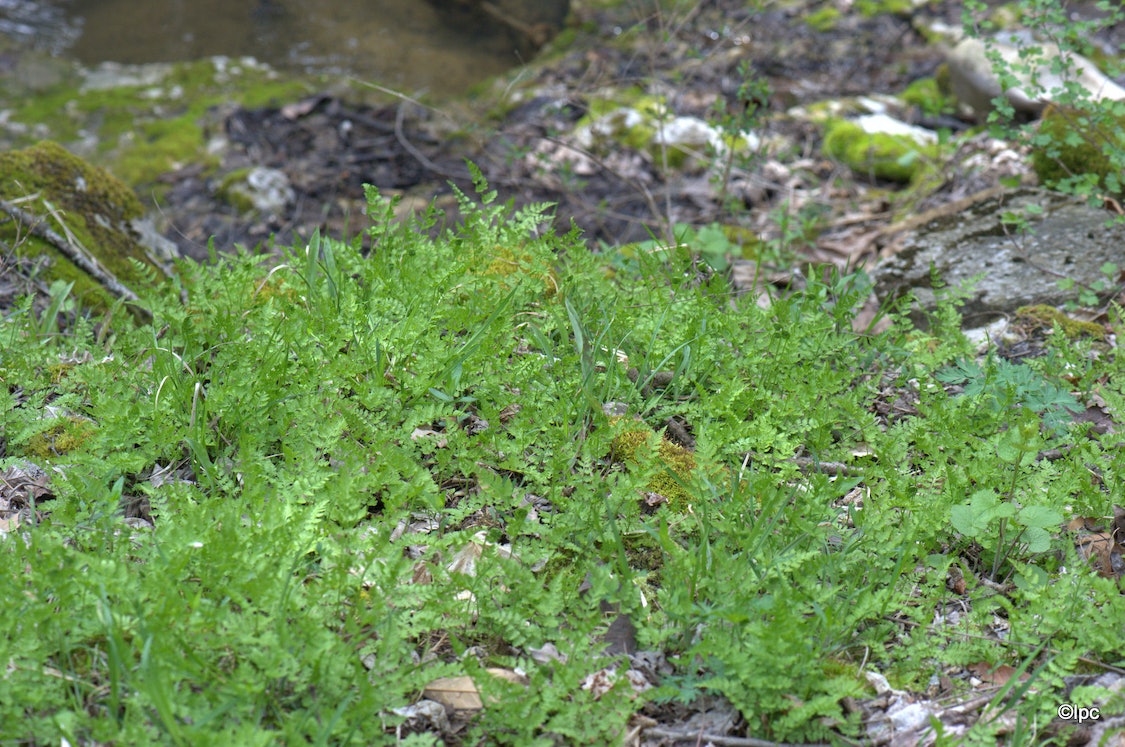 At this point the vocabulary of ferns becomes necessary. Anne and Barbara Hallowell introduce the terms effectively in their little book called Fern Finder, which I highly recommend for anyone who wants to begin studying and identifying ferns and is not a botanist.

Here is a single frond (leaf) of fragile fern showing how it branches into three lacey parts with each further divided into pinnae. Note that the pinnae pairs are slightly offset on each side of the rachis (stalk) instead of exactly opposite. The individual pinnules (smallest part of the leaflet) are toothed and smooth. 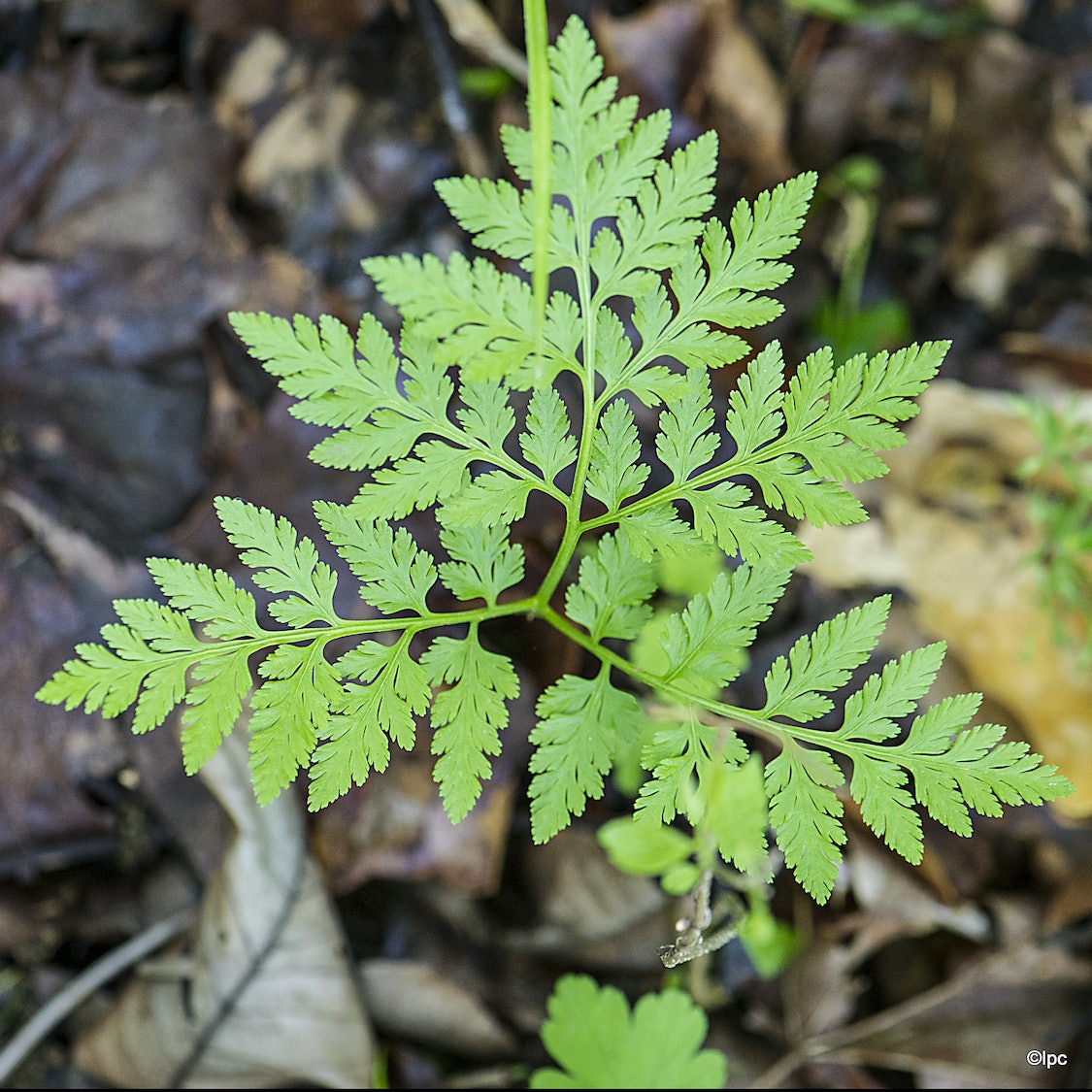 This photo shows the front side of a single blade. 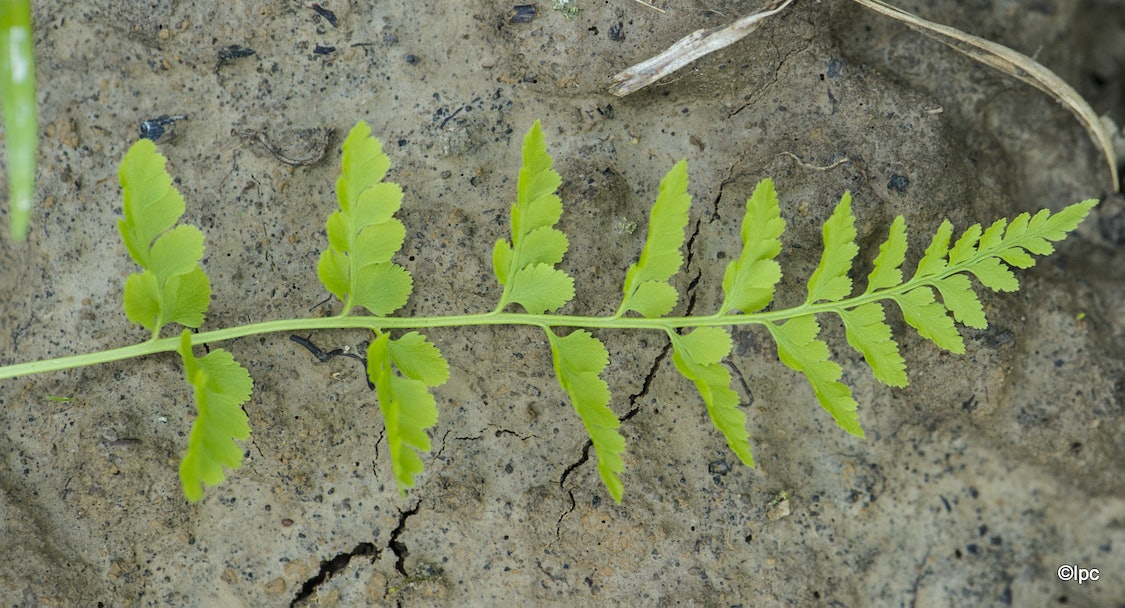 Here is the backside of one blade. This is early in the season and is either a sterile blade or too early for the sporangia to have formed. (Sporangia are spore cases which group together in little clusters that are called sori or fruit dots on the back of the pinnules.) 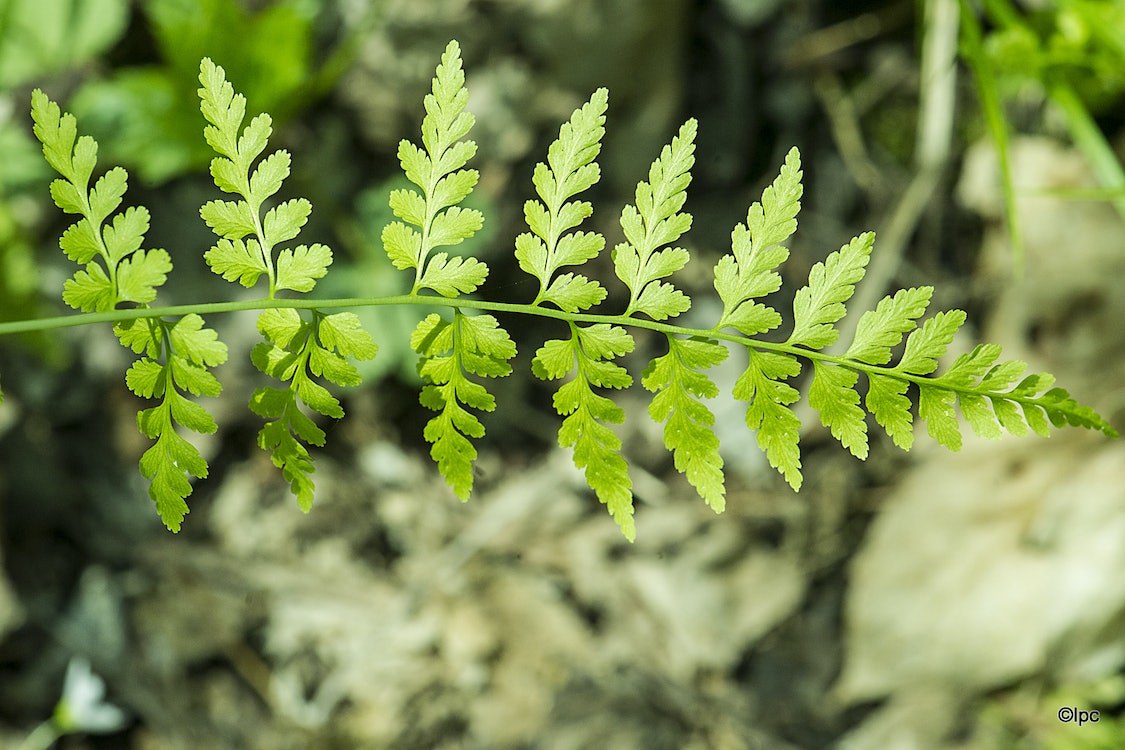 By the end of May, the sporangia are obvious on the back of the pinnules of this blade. 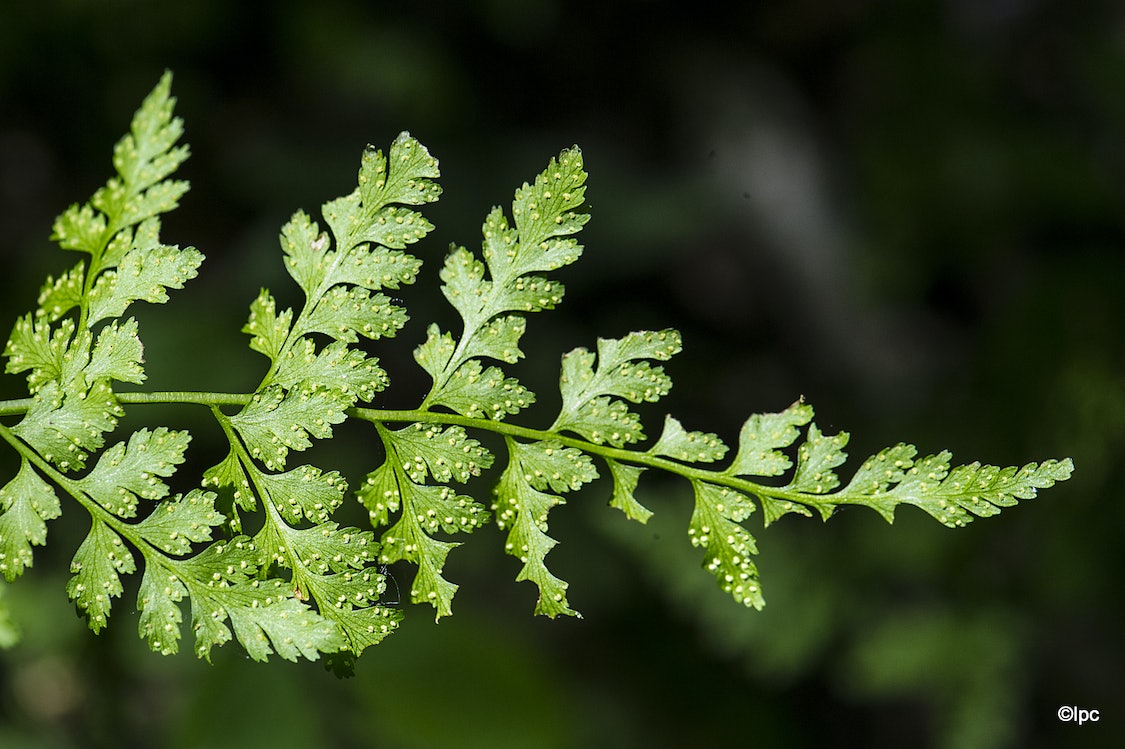 Below, on the back of the pinnules of a blade, are mostly ripened or black sporangia that are grouped into sori. 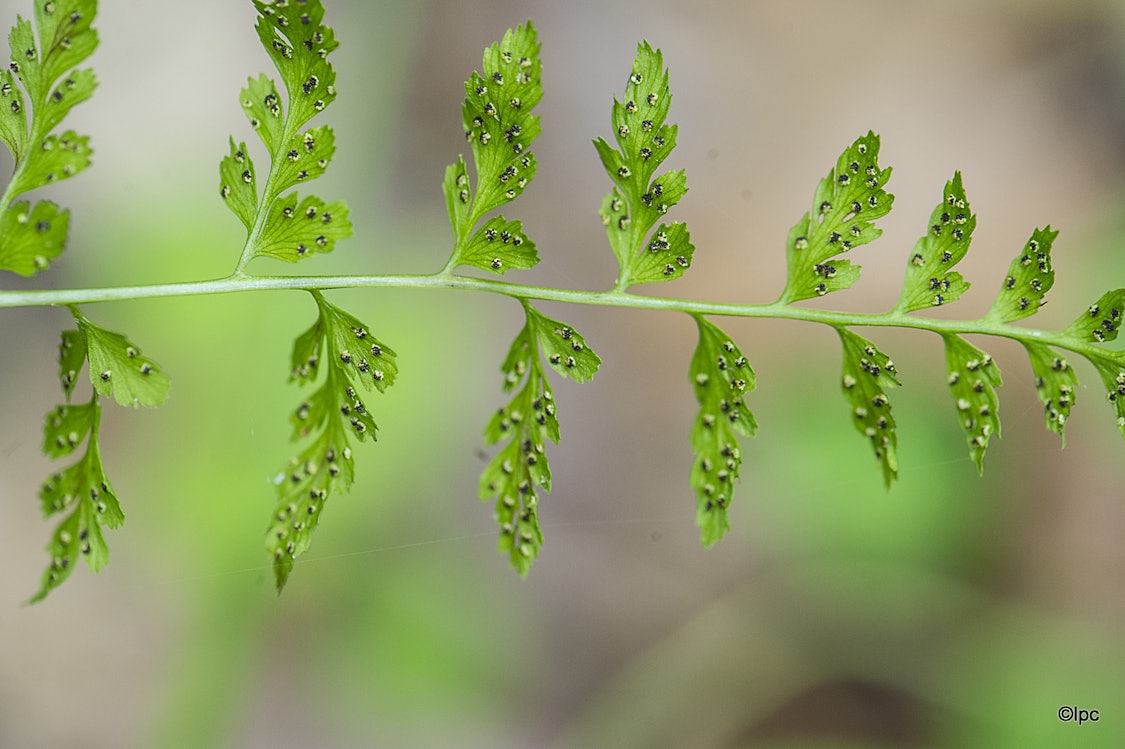 And below is a very close view of the almost ripened clusters or sori on a single pinnule at the end of May 2022. 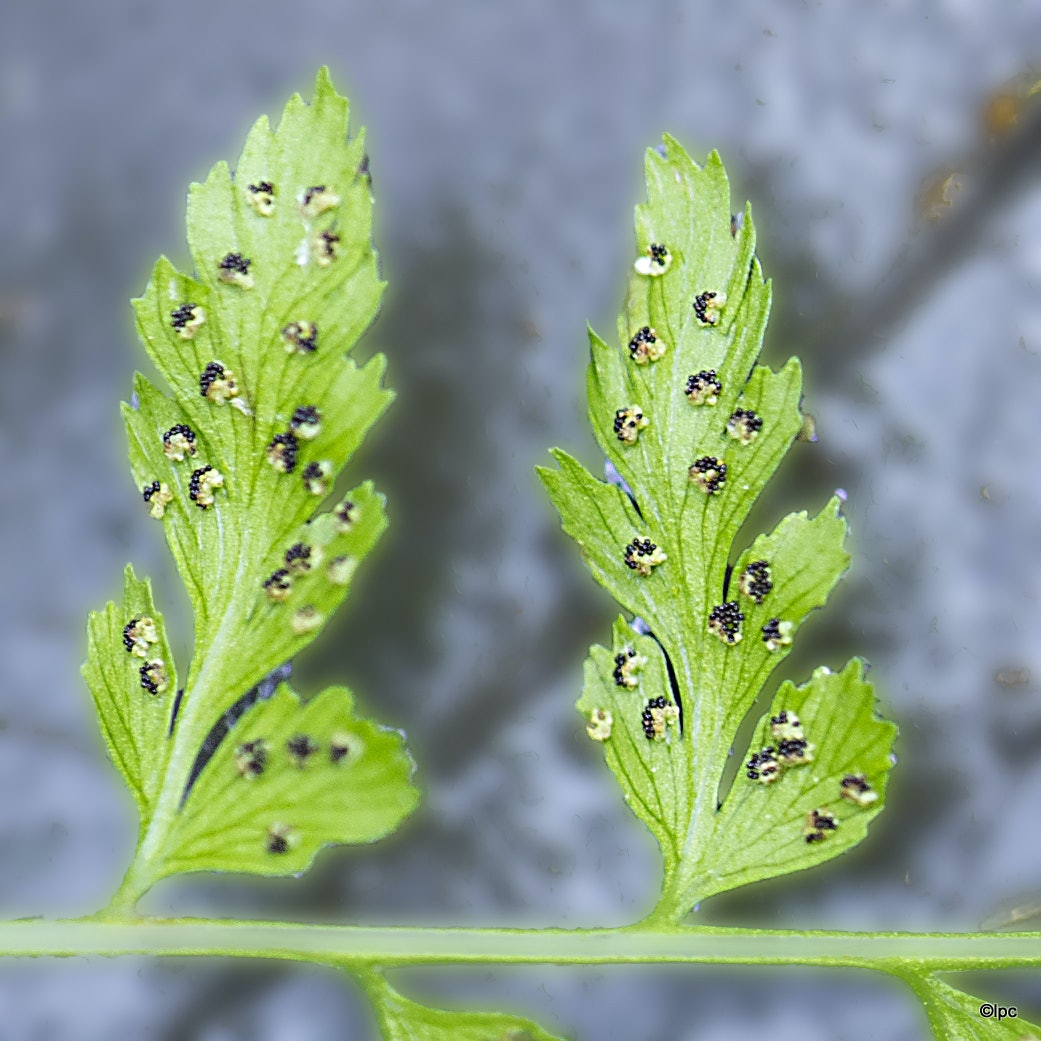 In addition, this fern reproduces readily by branching from its rhizomes.

But what happens to the fragile ferns as summer progresses? They begin to be overwhelmed by the tall, lush growth of woodland summer plants, as shown in this photo taken at the end of June. Also, those that have matured their sori will die away. 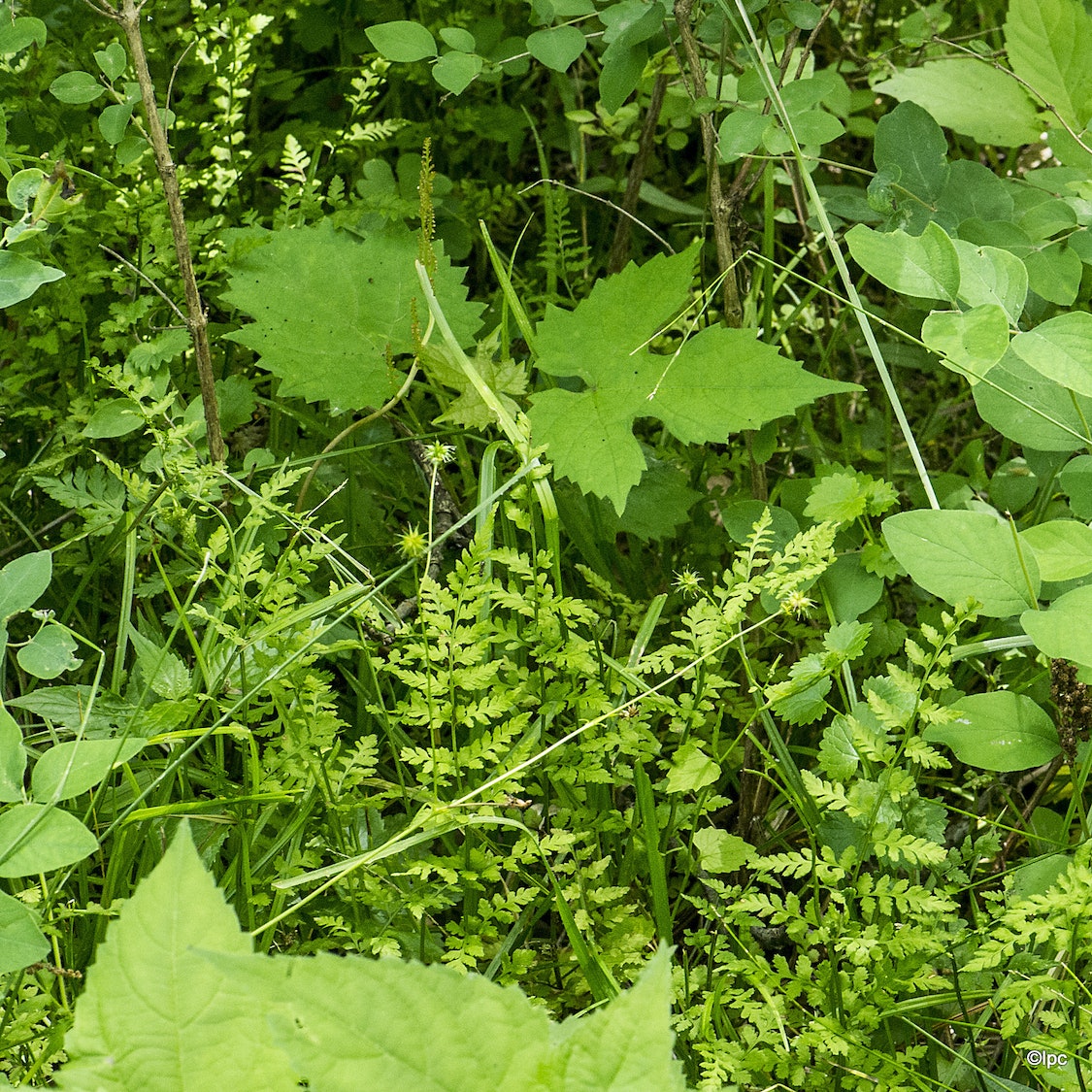 But in July, you will still find young new fronds emerging from the rhizomes as they continue to spread. 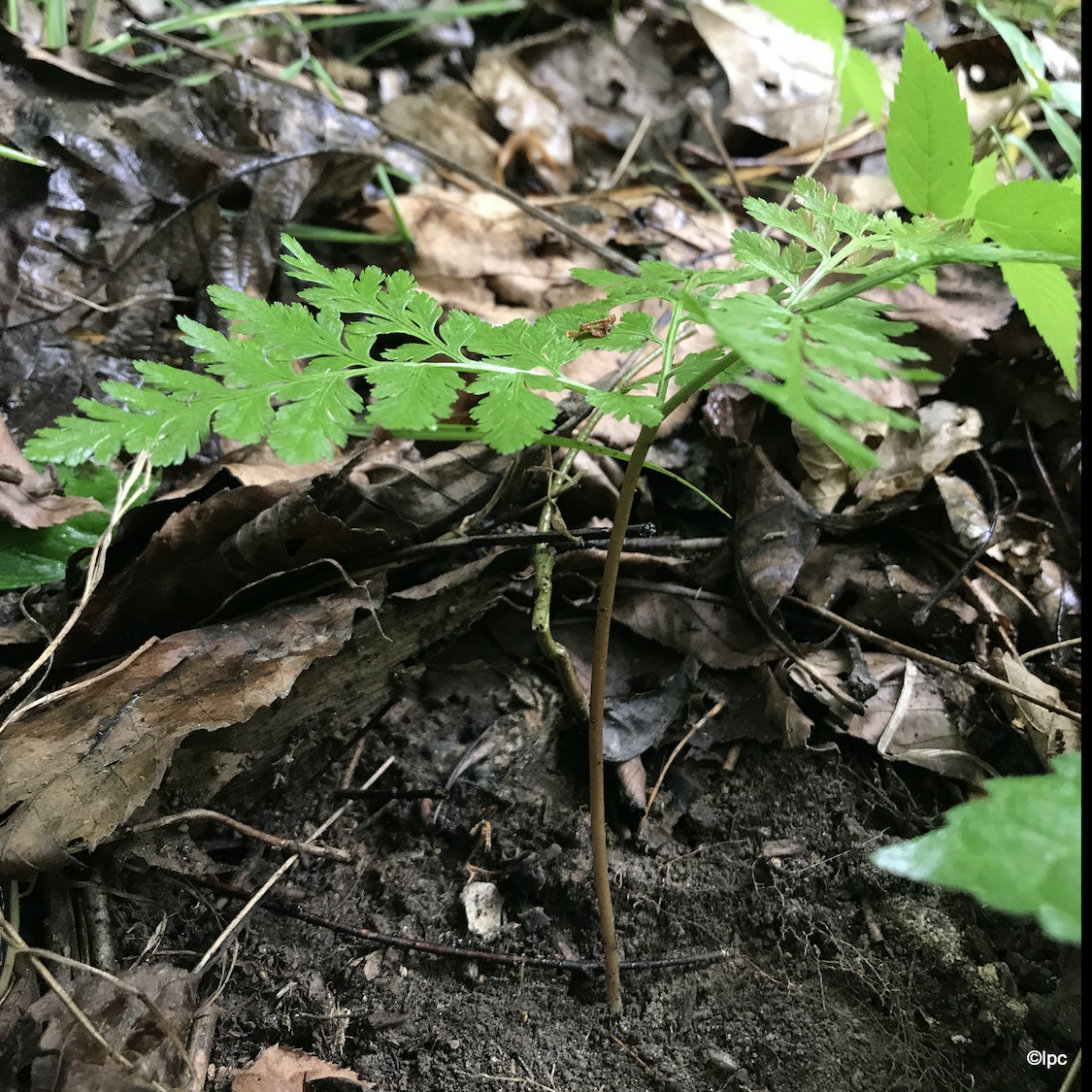 I hope that you will notice the charming fragile fern early next spring, when you first venture to the woodlands to enjoy the moss or flowers, or just to take a hike. It is a fascinating plant.

I received initial guidance regarding the identity of this fern from John Pearson, ecologist for the Iowa Department of Natural Resources. Here are the references (websites and book) that I found reliable and helpful in identifying and describing this fern and beginning to study ferns. Many other authors who have written about these ferns seem less knowledgeable, so I do advise caution in selecting your sources to study one or more ferns.