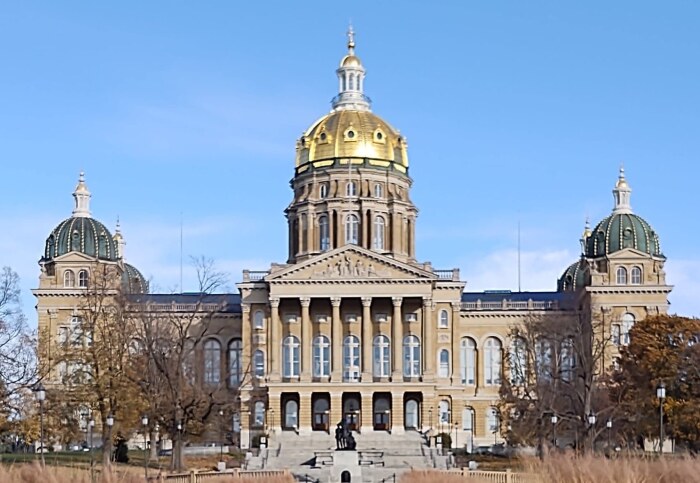 When former Republican Governor Terry Branstad signed executive order 85 in March 2014, he stated, “transparency provides Iowans the necessary access to information to hold our government accountable and our Open Records Act is essential to ensuring openness," adding, "Our administration has maintained a steadfast commitment to a transparent government.”

However, when Kim Reynolds became governor in 2017, a few months after Republicans gained full control of the legislature, transparency went out the window. Accessing many kinds of government data has become more difficult.

Iowa's open records and open meetings laws were designed to provide transparency. Any official of any organization that receives taxpayer funds must make it easy for the public to know the decision-making process and/or make data easily accessible when requested. “Ease” and “easily” are the key words; not burdensome . . . not in secrecy . . . and not hidden.

The lack of transparency examples by Reynolds, GOP legislators and agencies under Reynolds’ leadership seem to be unending.

Reynolds has not revealed the reasoning behind her $55 million private school voucher proposal, which would benefit just 2 percent of Iowa’s school children but would drain $79 million per year from Iowa's public school districts, according to nonpartisan analysis. Is her pro-voucher decision politically motivated to appease her evangelical Christian base of voters (Iowa's private schools already receive around $100 million in state funds each year)? Or does she have evidence that private school educational outcomes exceed those provided by public schools? Why the secrecy?

Iowa Capital Dispatch reporter Clark Kauffman filed public records requests in May 2021, after Iowa Workforce Development officials stonewalled him about claims that Director Beth Townsend made related to unemployment fraud. An attorney for the Iowa Public Information Board later found probable cause that Iowa Workforce Development violated the open records law—but recommended dismissing a complaint, on the grounds that the agency had fixed the problems.

Bleeding Heartland journalist Laura Belin, Kauffman and Randy Evans of the Iowa Freedom of Information Council sued Reynolds and some governor's office staff last December for ignoring eight records requests, in some cases for more than a year. In May, a Polk County District Court rejected the state’s motion to dismiss the lawsuit; the state's appeal of that ruling is pending before the Iowa Supreme Court

I remain perplexed whenever Reynolds or any of her agencies try to hide legally accessible information from journalists. Such action also keeps Iowa’s 3.15 million citizens in the dark. The governor swore an oath to discharge the duties of her office, as required by law.

During the past six legislative sessions, when Republicans controlled both chambers, the Iowa Senate and House Government Oversight committees have rarely examined executive branch practices or questioned Reynolds’ appointees.

Here are other examples of the GOP-controlled oversight committees' negligence. Republican lawmakers held no meetings:

The GOP-controlled Government Oversight committees should be renamed, “Don’t Ask Why Nor Probe Committee.”

In my years as a journalist in Iowa, I’ve covered five gubernatorial administrations. [...] I can say without hesitation that Gov. Kim Reynolds’ administration has been the absolute worst in terms of secrecy and outright denial of public access to information.

On November 8, will Iowans give Reynolds and her GOP peers a pass on their violation of Iowa’s open records law and transparency transgressions, or will they hold Republican leaders accountable for their gross dereliction of duty?

It is well known that past actions are the best predictor of future behavior. If Reynolds and others are re-elected, secrecy and non-disclosure will continue into 2023, 2024, 2025 and 2026.

Top photo of the Iowa capitol by Bruce Lear, published with permission.