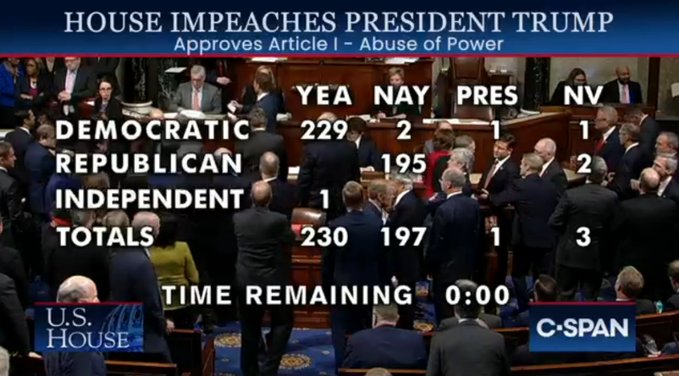 For the third time in U.S. history, the House of Representatives impeached a president. Following nearly ten hours of debate, House members voted 230 to 197 (roll call) to impeach President Donald Trump for abusing his power, and by 229 votes to 198 (roll call) to approve the second article, on Trump’s obstruction of Congress. (Read the full text of the articles here.)

As they had indicated in statements the previous day, Democratic Representatives Abby Finkenauer (IA-01), Dave Loebsack (IA-02), and Cindy Axne (IA-03) voted for both articles of impeachment. None gave a speech during the floor debate. Only two House Democrats voted against the first article, and three voted against the second, while Representative Tulsi Gabbard voted “present” in what she called a “stand for the center.”

No Republicans voted for either article, and Representative Steve King (IA-04) was among many GOP members who thundered against the drive to impeach Trump during the floor debate. I’ve enclosed below the video and transcript of his remarks, along with new statements from Senators Chuck Grassley and Joni Ernst, and comments from some Iowa Congressional candidates. You can read comments released before the House votes here.

House Speaker Nancy Pelosi announced after the impeachment that she won’t immediately refer the articles of impeachment to the U.S. Senate. House leaders hope to influence the Senate to agree to procedures that would allow for a “fair trial.” Senate Majority Leader Mitch McConnell has already said he is working closely with White House counsel and hopes to dispose of the impeachment articles quickly. 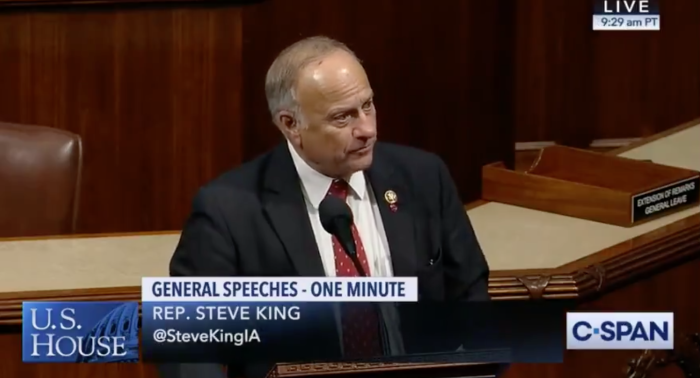 U.S. Representative Steve King has raised a shockingly small amount of money for his re-election and could be outspent by multiple Republican challengers before next year’s primary to represent Iowa’s fourth district.

But while King lacks the fundraising ability of many Congressional colleagues, he has invested his political capital wisely, aligning closely with Donald Trump in the president’s hour of need. 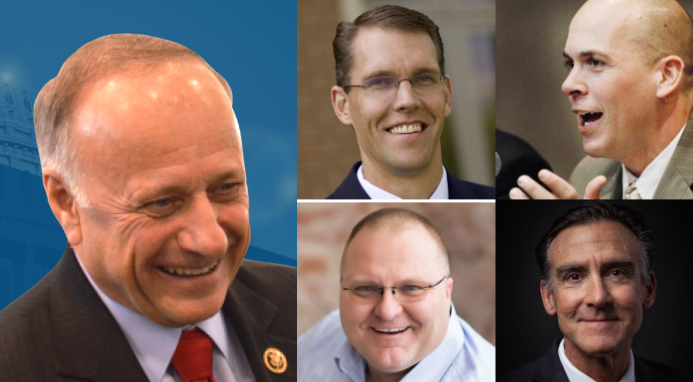 Labor Day traditionally marks the beginning of the most intense phase of campaigning in election years. This holiday is also a good time to review the state of play in races for federal offices in odd-numbered years. Though new candidates could emerge at any time before Iowa’s March 2020 filing deadline–Patty Judge was a late arrival to the Democratic U.S. Senate field in 2016–it’s more typical for federal candidates here to kick off their campaigns by the end of summer the year before the election.

Thanks to Iowa’s non-partisan redistricting system, all four U.S. House races here could be competitive in 2020, and our Senate race is on the map–in contrast to 2016, when Senator Chuck Grassley’s re-election was almost a foregone conclusion.

J.D. Scholten launched his second campaign for Congress today with a video emphasizing his connection to the land, the people, and the values of Iowa’s fourth district.

U.S. Representative Steve King’s leading Republican challenger reacted with a warning: the GOP could lose this seat with King on the ballot again.

The terrible, horrible, no good, very bad way to pick a nominee
By BronxinIowa | 2 Comments