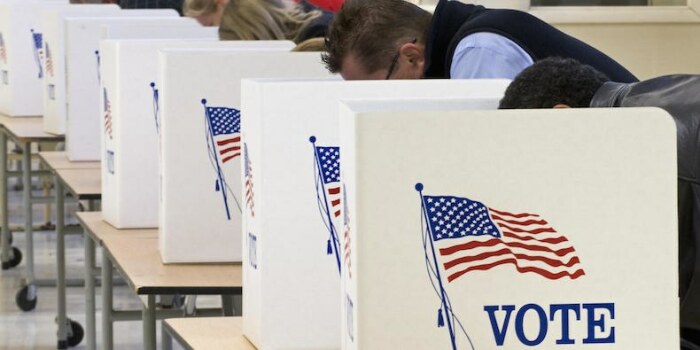 Fourth in a series interpreting the results of Iowa's 2022 state and federal elections.

Many people have asked why Iowa experienced the red wave that didn't materialize across most of the country. While no one factor can account for the result, early signs point to turnout problems among groups that favor Democratic candidates.

Although this year's turnout was the second-highest in absolute numbers for an Iowa midterm, participation was down about 8 percent compared to the 2018 general election. The number of Iowans who cast ballots this year (1,230,416) was closer to the 2014 level (1,142,311) than to the high-water mark of 1,334,279, reached four years ago.

My impression is that the decline in turnout was not evenly distributed, but was more pronounced among registered Democrats than among Republicans, who have long been more reliable midterm voters in Iowa.

Why do I suspect turnout dropped more sharply among key Democratic constituencies? Here are a few snapshots. (We will know more when the Secretary of State's office publishes the statewide statistical report in January.)

The county containing the Iowa City metro area is the bluest in Iowa by far. Johnson residents cast 68,262 ballots in 2018 and 63,638 votes for governor this year, according to unofficial results. That decline of around 6.8 percent since the last midterm is less than the statewide turnout drop. But keep in mind that unlike most parts of Iowa, Johnson has been gaining population in recent years.

John Deeth, a longtime Johnson County elections office employee, tweeted that this year's Democratic nominees for U.S. House and Senate (Christina Bohannan and Mike Franken) each received about 3,500 fewer votes than the top candidates on the 2018 Democratic ticket (U.S. Representative Dave Loebsack and nominee for governor Fred Hubbell). Deeth's impression was that "total turnout dropped everywhere except high growth areas" like Tiffin, North Liberty, and Coralville. The largest decline was on the University of Iowa campus.

Iowa's largest county contains most of the Des Moines metro area and more than half of all voters in the third Congressional district. The overall turnout drop here was slightly below the statewide average: 207,423 votes cast in 2018 and 190,999 cast for governor this year (a decline of 7.7 percent from 2018).

Granted, Nunn was fortunate no third-party candidates qualified for the ballot in this race. But even so, I suspect the voter files will show a large drop in Democratic participation—enough to account for Axne's district-wide deficit.

This county, covering the Waterloo/Cedar Falls area and the University of Northern Iowa campus, is another of only six statewide that voted for Hillary Clinton and Joe Biden. Democrats rely on solid margins here to make up for losses in many smaller red counties. Black Hawk residents cast 53,470 votes for governor in 2018 but just 47,140 this year, a decline of 11.8 percent (well above the statewide average) compared to the last midterm.

Another data point: Rob Sand outpolled State Auditor Mary Mosiman by 11,139 votes in Black Hawk four years ago. This year, his margin over GOP nominee Todd Halbur was just 7,662 in the county.

This onetime Democratic stronghold has drifted toward Republicans in recent years, but Democrats still did relatively well here in the last midterm election, when 43,069 Dubuque residents cast ballots. Turnout this year was 38,821, down 9.7 percent.

Democrats came uncomfortably close to losing an Iowa House seat covering part of the city of Dubuque. Whereas Finkenauer had a 3,077-vote advantage over Blum in 2018, Hinson carried Dubuque County against Mathis by 2,904 votes this year. Sand's margin over Halbur in the county was 2,138, way down from his 6,699-vote margin here four years ago.

UPDATE: A reader pointed out that Republican candidates gained a majority on the Dubuque County board of supervisors for the first time in living memory and defeated Democrats in races for county attorney and treasurer.

The statewide statistical report will tell the whole story about how many Democrats, Republicans, and no-party voters took part in this year's election. To get a sense of GOP voter enthusiasm, I looked at turnout numbers in some of Iowa's reddest counties.

In neighboring Lyon County, where the GOP ticket also received well above 80 percent, 4,999 people voted in this year's election for governor. That's only 4.7 percent below the 2018 turnout level of 5,247.

Moving to a red zone of northeast Iowa, Delaware County residents cast 7,647 ballots for governor this year, which was almost even with the 7,695 ballots cast in 2018.

Turnout in Davis County, where many Republicans exceeded a 70 percent vote share, was 3,029 this year, down 4.4 percent from the 2018 level.

Some small counties that vote heavily Republican saw relatively large turnout declines: for instance, 14 percent in Fremont County in the southwest corner of Iowa, and 10.9 percent in Ringgold County.

That's why I'll have more to say on this topic after the statewide statistical report is available. I'll be surprised if it doesn't show Republicans were much closer to their 2018 turnout than were Democrats.

Many factors could have contributed to a Democratic turnout problem. A few quick thoughts:

Weakness at the top of the ticket

Iowa didn't have a U.S. Senate race in 2018 to compare to this year's contest between Franken and Senator Chuck Grassley. But the last governor's race was considered a toss-up, and both party's nominees spent heavily.

In contrast, this year's governor's race was viewed as safe for Republicans all year. Reynolds outspent Democratic challenger Deidre DeJear on television commercials by at least a ten-to-one margin. The governor also benefited from frequent news coverage of her official activities, while DeJear struggled to get free media exposure. A few weeks before the election, an Iowa Poll by Selzer & Co for the Des Moines Register and Mediacom found that about half of Iowa adults still didn't know enough about DeJear to have an opinion.

Republicans outspent Democrats in most of the federal elections and in the statewide campaigns for governor, attorney general, state treasurer, secretary of agriculture, and secretary of state. Outside groups aligned with the GOP spent millions in the first, second, and third U.S. House districts, while Democratic groups provided some help to Axne but stayed out of the eastern Iowa Congressional races.

Most GOP candidates in battleground Iowa legislative races had far more financial support from their party for advertising and direct mail.

The Democrats who could afford to be on tv were mostly advertising in the Des Moines and Cedar Rapids television markets. I looked at some turnout numbers for counties in smaller markets.

In the Quad Cities, Reynolds and Grassley had large ad buys; Franken came in late, but to my knowledge DeJear never did. Congressional candidate Bohannan was on the air but outspent by GOP incumbent Mariannette Miller-Meeks and outside groups. Miller was on the air but outspent by Bird. Sand bought several weeks of television for his state auditor campaign. Scott County (Quad-Cities) turnout was down 9.0 percent, and Democrats almost lost a state House race in an area Biden carried easily. Des Moines County (Burlington) saw an 11.6 percent decline in voter participation, and Democrat Dennis Cohoon lost the Iowa House seat he had held for decades.

Few Iowa candidates other than Reynolds and Grassley were on the air in the expensive Omaha market. The only Democrats featured in a significant number of tv ads there were Axne and Council Bluffs legislative candidate Josh Turek. Turnout in Pottawattamie County (containing the Council Bluffs area) was down 15.3 percent compared to 2018.

Woodbury County (Sioux City) had one of the largest, if not the largest, turnout declines in the state: down 19.6 percent from 35,635 votes cast in 2018 to 28,656 this year. Reynolds and Grassley placed large ad buys on Sioux City tv, starting around Labor Day. Bird vastly outspent Miller. Sand did start running ads here in October, as did Franken, and Democrats were on tv for Sioux City area state House and Senate races. But GOP ads were much more visible.

Turnout in Cerro Gordo County (Mason City) was down 10.9 percent compared to 2018. The only Democrat to place a significant ad buy in the Rochester, MN/Mason City market was Mathis, and she was outspent by Hinson and GOP-aligned groups. Franken came in late and was greatly outspent by Grassley.

Turnout in Wapello County (Ottumwa area) was down 13.7 percent compared to 2018. Axne was the only Democratic candidate to advertise heavily in the Ottumwa/Kirksville market, which reaches four Iowa counties. Franken came in for about one week at the end. Reynolds, Grassley, and other GOP candidates had many more ads in rotation.

Lee County in Iowa's southeast corner is part of the Quincy, Illinois market, where to my knowledge only Reynolds and GOP State Representative Martin Graber were running tv ads. Turnout was down 9.6 percent from 2018.

While Republicans opened campaign field offices in many counties, the Iowa Democratic Party massively scaled back its "coordinated campaign" this year. The party funded fewer mailings encouraging early voting and fewer field organizers. The "Hughes Project" financed by longtime large Iowa Democratic donors didn't seem to do much to register or mobilize voters.

Compounding the problem, out-of-state groups that funded large mail or field operations in Iowa four years ago (such as NextGen America and the Center for Voter Information) were not engaged here this cycle.

All four of Iowa's U.S. House races were competitive in 2018. The prospect of J.D. Scholten taking down the hated Representative Steve King energized voters across the vast fourth Congressional district. This year, Democratic nominee Ryan Melton raised little money for his Congressional campaign against Randy Feenstra, so the IA-04 race wasn't on anyone's radar.

As mentioned above, Woodbury County (Sioux City) saw a huge 19.6 percent drop in turnout this year. Elsewhere in IA-04, turnout was down 13.9 percent in Story County, anchored by Iowa's second-largest college town (Ames). And in Webster County (Fort Dodge), turnout was 15.3 percent lower this year than in 2018, when Scholten carried the county against King.

I suspect uncontested legislative races are associated with lower turnout as well. Hard-working state House and Senate candidates may knock thousands of doors during an election year, helping to ID supporters and get them to the polls.

Marshall County turnout was down by 15.9 percent, and I wonder whether part of the reason was the GOP not challenging the Democrat who now represents Marshalltown in the Iowa House.

Iowa Democrats rely more on early voting than do Republicans, so it's not surprising that the GOP-controlled legislature and Reynolds moved last year to restrict early voting in almost every possible way.

The impact was clear: 535,782 ballots cast before election day in 2018, but only 371,575 ballots cast before November 8 this year. No doubt many Democrats changed their behavior in response to the new rules, choosing to vote on election day instead of by mail. The statewide statistical report will reveal whether that was enough to make up the gap.

Woodbury County may have been particularly affected by these changes, because for many years, county Auditor Pat Gill sent absentee ballot request forms to all registered voters in the county. Iowa's 2021 election law prohibited universal absentee ballot request mailings, so residents who were accustomed to voting that way may have missed their window to obtain a ballot.

State Representative John Wills told a heartwarming story last month about reassuring an elderly Democratic constituent that she could still vote by mail. Trouble was, she had already missed the deadline for requesting a ballot.

Kathie Obradovich wrote at Iowa Capital Dispatch about how an unexpected hospitalization almost prevented her mother from voting.

I'd like to hear from more Iowans who were tripped up by the new election laws. Please reach out if you have a story to share.