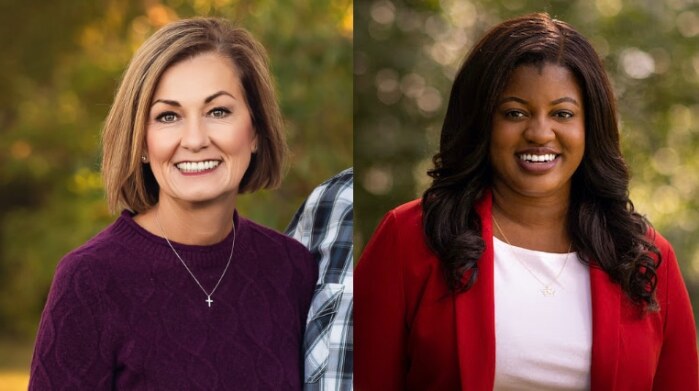 The filing deadline for campaign finance disclosures is always an exciting day for political reporters. My plan for this week was to write a series of posts about fundraising and spending for each of Iowa's statewide races: governor, attorney general, state treasurer, secretary of state, state auditor, and secretary of agriculture.

Iowa candidates for statewide and state legislative offices were required to submit disclosures covering 2021 by January 19. You can access all of those filings on the Iowa Ethics and Campaign Disclosure Board's website.

One of the biggest advantages of incumbency is being able to raise lots of money. That's especially true for Republicans, whose policies tend to benefit wealthy people and corporations. Moreover, four of the last six general elections in Iowa have been GOP waves. So everyone expected Governor Kim Reynolds to report some intimidating numbers, and she did: $3,771,993.19 raised during 2021, having started last year with more than $2 million in the bank.

DeJear raised more than $750,000 for her secretary of state campaign during the 2018 cycle (you can find those filings here). So while I didn't expect her to keep pace with Reynolds' fundraising, I thought that six months after she began exploring a gubernatorial campaign, she would report numbers well into six figures.

DeJear raised $279,376.92 last year. To put that number in perspective, by January 2018, John Norris had raised a little more than $300,000 for his gubernatorial campaign, and four other Democrats challenging Reynolds had raised more than double that amount. Three of them had brought in more than $1 million.

In fairness to DeJear, Iowa Democratic donors have been beaten down by results from 2020, when well-funded candidates lost a U.S. Senate race, two U.S. House races, and almost all of the targeted state legislative races. Although DeJear received a few donations in the $2,500 to $5,000 range, many "usual suspects" who have written large checks to previous Democratic candidates for governor are on the sidelines this cycle.

DeJear is well-liked among Democratic activists and convinced many to support her campaign. More than 5,000 people made more than 7,300 individual contributions, according to a video the candidate posted on January 19.

The disclosure lists $56,924.78 in unitemized contributions, which struck me as odd. Campaign manager Cynthia Sebian-Lander explained that those came mostly from small online donors. If any individual's cumulative contributions exceeded a certain threshold (she thought it was $20), then each gift from that person would be itemized. Indeed, the report shows numerous donations of $10 or less. UPDATE: The campaign amended its filing in February to name all small donors.

But those small gifts could barely keep up with the campaign's operating costs.

During the second half of 2021, DeJear's campaign spent $270,829.64, a shocking 97 percent of funds raised. UPDATE: The Des Moines Register calculated the burn rate at 93 percent of total receipts (including donations worth $12,168, which the campaign received in kind).

I dug into the itemized expenditures, trying to understand how this happened. Salaries, payroll taxes, and associated fees totaled $95,541.87. There were many other typical expenses, like voter file software, video production, printing, postage, and office supplies.

Consulting costs seemed quite high. You do have to spend money to raise money, but DeJear's campaign spent $39,191.07 on fundraising consulting alone, plus $26,839.63 for texting services, which were mostly fundraising texts. Other payments covered "campaign and administration services" and media, digital, "public affairs," or compliance consulting. In all the campaign spent $106,913.80 on consulting over a five-month period.

Reynolds also spent heavily on consultants, but her campaign was bringing in millions.

I don't know enough about this corner of the political world to know whether DeJear was overpaying for various services. State Auditor Rob Sand's campaign spent a total of $8,500 last year on a compliance consultant, whereas DeJear spent nearly double that amount ($16,349.24) on compliance consulting.

I do know that no campaign should have a burn rate of 97 percent in the off year. The most brutal number on DeJear's filing was the cash on hand total: $8,547.28 as of December 31. Dozens of state legislative candidates entered the election year with more than that.

The irony is, State Representative Ras Smith ended 2021 with $11,094.67 in the bank for his gubernatorial campaign—which he recently suspended after acknowledging he didn't have the resources to compete. (Smith reported raising $136,293.80 and spending $146,582.32 last year.)

I asked Sebian-Lander on January 19 whether the campaign would be making any changes, like reducing staffing or curtailing relationships with some of the consultants. She didn't answer questions about how long the campaign is obligated to keep purchasing consulting services. She did say, "We have no plans to reduce staff."

I have long felt competitive primaries are healthy for a party. They hone candidates' skills and expose more voters to the eventual nominee through reporting on the competitors or interviews and debates before the primary election. Since Reynolds is able to make news almost every day by virtue of her office, it would be helpful to have multiple candidates pointing out her administration's many failures.

The argument against contested primaries is that they force candidates to spend too much to win the nomination. Those resources might be better used to get the candidate's messages out later in the year, when more voters are paying attention. It's a reasonable perspective.

Iowa Democrats are now staring at the worst of both worlds: no competition to generate excitement and news coverage before the June primary, and no sign that DeJear will be able to build up a sizable campaign fund. Even without a Democratic opponent, DeJear may emerge from the primary without enough money to make herself known to the general electorate, let alone press any case against Reynolds.

Speaking to the Des Moines Register this week, DeJear acknowledged "fundraising is incredibly challenging" but suggested,

“My job is not to persuade donors. My job is to ensure that voters are ready to go to the ballot box and ready to vote for me. And that takes more than just money. It takes time. It takes dedication. And so while others are waiting with their funds, they'll come around eventually. But in the meantime, we've still got work to do. We've still got an organization to run.”

There's no guarantee donors will "come around eventually." They may write off this race; lots of talented Democrats are running elsewhere.

Without a well-funded nominee for governor, the Iowa Democratic Party may struggle to finance its GOTV operation this fall.

Side note: while it's getting late to launch a statewide campaign, there has been some speculation that State Representative Chris Hall may jump into the governor's race. He has not announced his plans.

Reynolds already has almost $5 million to spend and could easily raise millions more this year. If she has no serious competition in the general election, she may turn over most of her campaign funds to the Republican Party of Iowa, which could spend millions on GOTV or promoting GOP candidates for other statewide offices. Speaking of which:

I'll write more about each of these races as the campaigns unfold. We'll have a better picture after May 19, when the next reports must be submitted to the Iowa Ethics and Campaign Disclosure Board.

Republican challenger Brenna Bird formally launched her campaign this month, so reported little activity during 2021. She had some money in the bank from her last county attorney campaign and raised $12,602.84, mostly from four large donors. Those included former Governor Terry Branstad ($1,000), Pete Brownell ($5,000), and Frank Brownell ($5,000), owners of a large firearms selling business. Though Bird had only $28,972.54 cash on hand as of December 31, I expect her campaign to be a multi-million-dollar operation.

Democratic incumbent Michael Fitzgerald raised $16,481.02, all from individuals other than a small amount of bank interest. He ran the most frugal operation, spending just $986.17, of which $500 was a donation to the Iowa Democratic Party. Fitzgerald closed out the year with $49,837.32 cash on hand.

Republican State Senator Roby Smith launched his state treasurer campaign in December. A lot of the $134,686.12 he raised last year came from PACs and individuals donating to his Iowa Senate campaign. But he also pulled in a bunch of large individual and PAC contributions in December. Smith reported spending $14,635.96. As of December 31, his campaign had $144,530.58 cash on hand and $9,148.61 in debts.

Republican incumbent Paul Pate raised $38,400 and spent $21,405.96, leaving $31,602.81 cash on hand. He has the ability to self-fund and has loaned his campaign hundreds of thousands of dollars in past cycles. Pate's campaign still has outstanding loans of $223,500, owed to the candidate.

Republican Mary Ann Hanusa declared this month for this office, having been a Congressional candidate for much of last year. She reported no fundraising for state auditor during 2021.

No Democrat is campaigning for this office. To my knowledge, only John Norwood is seriously considering the race.